Convincing Precoiners With The 1% Rule 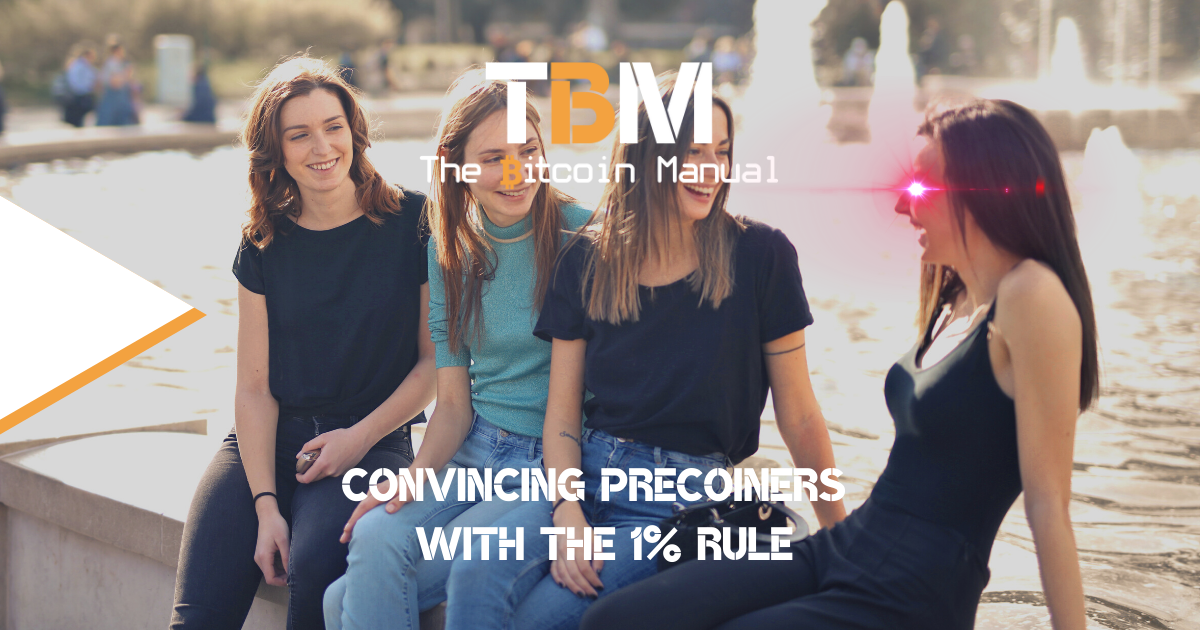 Convincing your normie friends can be a challenging undertaking; I’m personally batting pretty low averages when it comes or orange pilling friends and family. Most still think I am a raving lunatic, of which I am. I mean, I spend time writing about Bitcoin for no reason other than I like it. I am not getting paid by the Bitcoin company. The Bitcoin CEO doesn’t know who I am.

There is no reason anybody should be listening to me about Bitcoin; there are far better resources for that. I am just a working-class guy stacking sats; what do I know?

I’ve found that many fiat thinkers prefer the call from authority; they don’t care if you can make rational arguments. They don’t care if you have data or proof. The primary reason no one listens to me about Bitcoin is that I am not flaunting wealth. I think this is evident in the number of shitcoiners and influencers who use this tactic.

It was never about the quality of information; it’s all about social proof; that’s what normies want, so don’t feel bad if you don’t get through to them.

On the off chance that they have an interest in listening.

Now once you’ve filtered out the shitcoiners, fiat maximalists, and Q Anon people, you’re left with a few curious minds, but that doesn’t mean the road gets any easier. Everyone has a different angle that resonates with them and motivates them to learn more about Bitcoin beyond the price.

You are trying to figure out what anecdote or relationship between established ideas, which can help them click, takes time. You have to listen to how they process the information you provide them and then draw them in through several discussions.

In my journey, for some:

Finding the message that resonates with them can help get them curious enough to learn more. Even then, it’s not a complete proof plan to get them to take a position in Bitcoin.

Getting skin in the game.

Parting with your hard-earned money is a big step. The perceived volatility can be fighting, as the price gyrates on due to a host of factors. It can be daunting, and building a conviction takes time. You can learn as much as you want, but if you never take a position in Bitcoin, it won’t help.

So how do we get people to take that initial step?

I’ve tried giving out some Bitcoin as gifts to get people started. I am pretty sure most have sold it and not bothered to add to it. But others have, and I find that their interest grows. As they watch the price of their asset appreciate, so too does their curiosity to learn more or, better yet, add to their Bitcoin stack.

What I tend to recommend doing is the 1% pitch, if you lump some of the cash in your bank account, yielding nothing and, in some cases giving you a negative return. I suggest trying to take 1% of that cash balance and put it into Bitcoin.

If that’s too daunting, I suggest taking 1% of your monthly salary and putting it into Bitcoin when you get paid. These baby steps are far more palatable, and they feel the risk is pretty low because the cash balance they are “risking” isn’t all that meaningful.

Suppose you can spare 1% of your salary to buy Bitcoin every day, week or month. Buying Bitcoin then seems like a regular consumer purchase. The same way you may have spent on a magazine, pack of cigarettes or a can of soda, you apply that same behaviour to Bitcoin.

It takes a typical purchasing behaviour and applies it to Bitcoins savings technology.

Letting time and performance speak for itself.

Here’s the real kicker, get them to track how much they are spending on Bitcoin each month over a 1, 2, 3 or 4 year period. Yes, some won’t make it all the way, so don’t feel bad if you lose a few; having the conviction to hodl and consistency to stack doesn’t come easy to everyone.

As Bitcoiners, we know that Bitcoin is going to outperform fiat and many fiat investment opportunities today. Once you show them what they can achieve with a relatively modest 1% allocation, then get them to compare it to their other investments that make up larger chunks of their net worth.

Measuring those gains and making the obvious comparisons can be the catalyst that begins their hyper bullish attitude. It’s not about greed or money; it’s about showing people how acting rationally in their self-interest can benefit them if they have the right tools at their disposal.

If you’ve been a Bitcoiner for a complete four-year cycle, you’ll know even if you tried to maintain a 1% position and add at the same percentage in fiat terms.

Bitcoin won’t be 1% of your portfolio for very long.

It will grossly outperform your fiat assets and investments and eventually creep to become a more significant part of your net worth without you even trying that hard.

When people see this, they become more proactive in their stacking. Since they now know the proof, they have the proven formula, and most importantly, they did it all on their own.

Once you realise you have control over your financial future and prove it to yourself over a consistent period, the effects tend to snowball, and who knows? Eventually, the person you orange pilled will start orange pulling others.

Now wouldn’t that be a proud moment?

So here’s to the 1% rule and giving precoiners the tools to take their financial future into their hands.

Side note: Yes, you helped and should receive a reward for putting them on the path. A beer or seven, for the person that got you into Bitcoin, that’s just common courtesy. So make sure they know who thank in liquid form.

South African bitcoin pleb falling down the rabbit hole and willing to share every bump, scratch and knock along the way
View more articles from this author
PrevPreviousWhy Selling Your Bitcoin Is A Losing Game
NextMoney Is BitcoinNext