Why Selling Your Bitcoin Is A Losing Game

Home » Articles » Why Selling Your Bitcoin Is A Losing Game 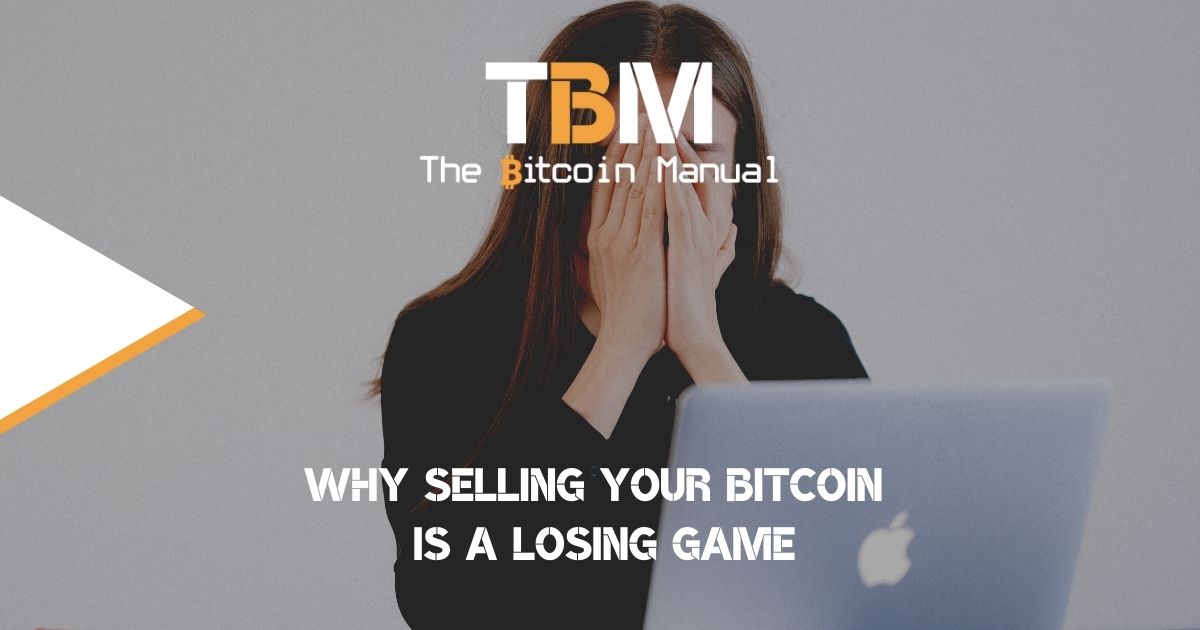 To me, Bitcoin is a currency and unit of account, but the idea of currency has been corrupted for so long many do not see it as one. Very few, if any, people living today can say they’ve held a currency that appreciates. It seems like a weird concept, a sort of alien technology; we are so used to currency debasement we think that it’s part of how all currencies work, so anything that doesn’t debase cannot be a currency.

When you see NGU technology in action for the first time, you start to scratch your brain, and you’re looking for something to compare it to so you can make sense of Bitcoin.

The closest thing to intangible money would be stock certificates; that’s why I am not surprised when normies talk about investing in the Bitcoin stock and think there’s some Bitcoin company behind it. The idea of purchasing something and then swapping it for more fiat units is how most people see stocks, especially since dividends don’t seem to be prevalent reasons to hold them anymore.

Bitcoin was launched after the 2008 financial crisis. A time when stocks decoupled from fundamentals more than they ever did before. It wasn’t about access to future cash flows. It was about storing purchasing power in anything with a liquid enough market.

Since stocks became a store of value and a financial vehicle, you traded for more fiat when one needed liquidity. Bitcoin’s market has matured into something similar, with most people trying to trade in and out of it for fiat gains.

No one can time the market, we’re all guessing

If anyone tells you they know when to sell and when to buy back in at any time frame when it comes to Bitcoin, I suggest you run, run as fast and as far as you can. This person is either lying or they have way too much confidence in their abilities. The truth is none of us knows where the market will go, how it will price in good news or bad news in the short term.

No one knows when it’s going to rip or when it’s going to crash, that’s why they’re so shocking, it’s always unexpected. If you think you’re going to sell at the top and buy back in later, you better accept that there’s a bigger chance you will miss your window.

Yes, you could be right but acting on it, is also another story.

I’ve seen plenty of people claim they will sell and buy back in later only to tie their cash up in something else and miss their window. In other cases, you want to keep hold of your fiat gains or spend it only to secure less Bitcoin when it does crash.

We don’t always make rational decisions and that’s why I say holding is saving you from yourself.

When you trade, you focus on one at the expense of another.

Since most people trading Bitcoin do so to secure more fiat, they actively trade to ensure they have less Bitcoin. As you trade and roll out of positions, and Bitcoin’s price continues to rise, it takes more and more fiat to secure that same amount of satoshis.

In many cases, you’re simply trying to trade the volatility, and you’re not actively looking at the amount of Bitcoin you’re accumulating. So sure you’re buying and sells are netting you more fiat, which is your goal.

But you are sacrificing the ability to secure the cheapest sats at the lowest price possible. In the long term, the opportunity cost of all those sats you lost through trading can compound to be larger than the gains you made pocketing the different spreads you traded.

Fees eat into your satoshis.

Trading isn’t free; it comes at a cost; these shitcoin casinos don’t allow you to trade on their matching engines because they’re doing the market a valuable service.

They’re there to earn money.

Every time you place a successful buy or sell order, a certain amount of that is taken from you in fees.

If you’re trading on DEX’s, it could be even more painful to your bottom line long term as you have to fork out on-chain fees to pay for the finality of the transaction.

Then, of course, there’s the dreaded tax for your success. If you are lucky enough to make out like a bandit in the markets and trade your Bitcoin for a considerable amount of fiat, cover all your fees, and you’re way in the money.

The government is going to want their piece of it. When you convert Bitcoin into fiat, you have to pay the toll for using their payment rails, and it can be pricy.

Depending on your country and your government’s classification of Bitcoin, you could be hit with some serious capital gains that would eat into your profits, leaving you with less fiat. Once your balance is eaten into by tax, it also means you have less chance to secure a more significant Bitcoin position in the future.

Leverage will wreck you.

Then there’s the unique trader, the one with ice in their veins, or they’re an overconfident “moonboy” or “moongirl”. They are so bullish on Bitcoin that they borrow Bitcoin at a specific rate and trade with the house’s money.

If they win, they pocket a more significant return on the spread and can pay the fee for borrowing the capital and move on.

If, however, you’re wrong, you can quickly be liquidated and walk away with zero. Trading with leverage multiplies your risk exponentially, and exchanges know this, so they’re happy to offer you the service to destroy your account.

If there’s one way to obliterate your stack of Bitcoin in a short space of time, then it’s to trade on leverage as an inexperienced trader.

Trading isn’t for everyone.

Look, I am no trader. I don’t know how to time the market and manage my positions. It’s not my field of interest, and I don’t plan on getting into it. I don’t have enormous amounts to play with or risk losing the Bitcoin I’ve worked so hard to acquire.

The marginal return I could achieve from trading is so tiny; it’s a waste of my time even to consider. I know many people fetishes trading like it’s this fantastic way to get rich from your laptop. The reality is, pocketing spreads in the market is a big stack game. A stack I do not have the luxury of playing around with; this is my life.

I am not about to throw my life away on the off chance of getting to a place I can get to with hard work and dedication and simply being patient.

We see the moon shot trades, but they are all anomalies; they are not the norm. The time I waste trying to watch the market and time trades will get me more Bitcoin than I am currently doing.

I would instead focus on what I am good at, my job, I bring value to clients and pay me for my services. I then spin off some of that disposable income into Bitcoin. And I am sure that I am increasing my Bitcoin position.

Yes, it sounds boring and requires hard work, but the fiat mining game, for me, has been the most profitable strategy, and if you’re not an expert trader, it could be the better option for you too.

That is, of course, If your goal is to acquire as much Bitcoin as possible for the long term. Stacking is a process, a process you need to respect. The power of compound growth is on your side; all you need to do is leverage it consistently.

South African bitcoin pleb falling down the rabbit hole and willing to share every bump, scratch and knock along the way
View more articles from this author
PrevPreviousWhy Bitcoin Beats Precious Metals When Fiat Money Goes Bad
NextConvincing Precoiners With The 1% RuleNext