Why Bitcoin Is The Only Currency With NGU

Home » Articles » Why Bitcoin Is The Only Currency With NGU 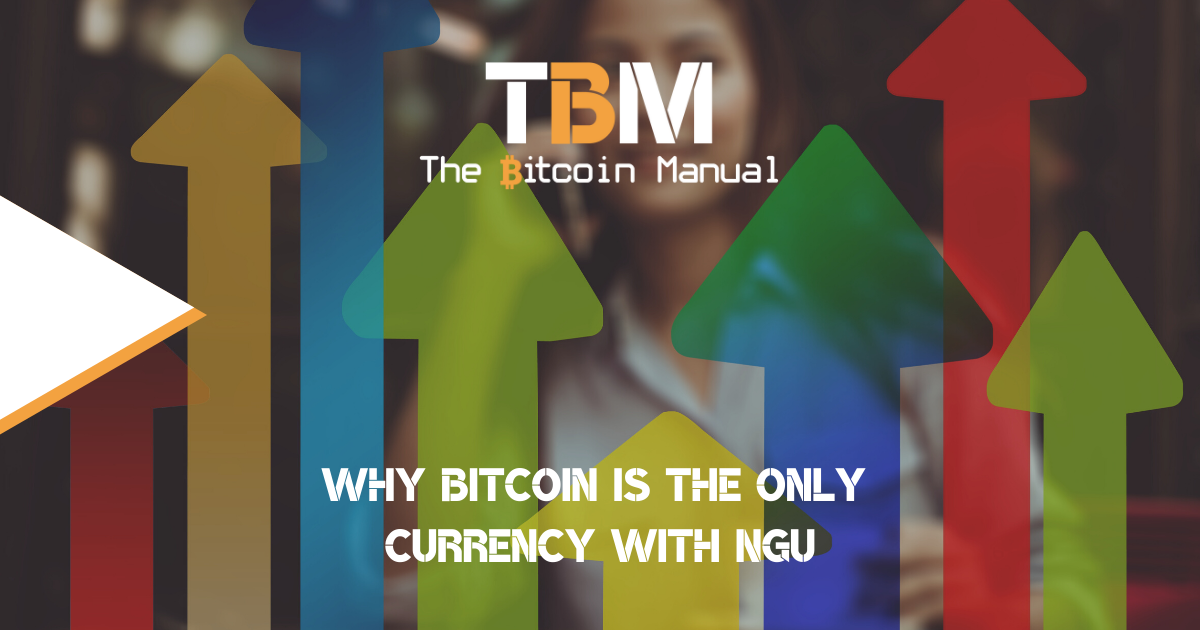 We can talk about the moral case for Bitcoin and the good it can bring to the world but as good as we claim to be, people are incentive-driven. You have to give them a carrot to chase, and they will gladly find a way to get a taste of the carrot.

Like it or not, Satoshi weaponised one of our most powerful human emotions, greed. Price appreciation is pretty much the driving force of the market and industry now, and I don’t see that changing anytime soon. This market dynamic is unlikely to last forever, especially as more participants, retail and institutional, enter the space.

The price appreciation narrative has manifested in a simplified message many refer to as “Number Go Up”. NGU has been a popular meme in the Bitcoin community for some time now and is often parroted as a sarcastic reason to get into Bitcoin.

Naturally, people will be sceptical about something so profound; it sounds too good to be true. How can an asset appreciate at a rate of 200% a year for ten years straight? It must be a scam; nothing can grow at that pace without a catch to it.

As currencies are losing value year over year without skipping a beat, rational economic actors like you and I look for better places to put their money. Many have decided to put it into stocks, bonds, precious metals and real estate.

These investments have gone far beyond their production cost value and are now pushed into speculative values. There is too much monetary premium, and there is no home that can service it; until now.

Bitcoin offers savers a place to put their excess productivity and have it appreciate consistently over time.

Is Number Go Up only about the price?

The meme itself is mainly about the price, without a doubt. But the message behind it has far more depth. As the price rises, it brings in more people, and with more people comes more participation in the Bitcoin economy.

The more capital sloshing around in Bitcoin translates to the rise in:

Cash is still the most liquid asset on the planet, it’s the one we use to transact, the one we use to save and the one we use to measure our savings and income as well as paying our obligations in such as taxes. It’s 50% of all economic transactions and barter calculations so in an essence we are locked into this ecosystem.

While the rest of us have to go out, trade our time, labour and goods for the existing money supply. Governments and banks are able to increase the money supply at will.

These increases in the money supply mean your claim on productive goods and services shrinks every time they increase the supply since you have a smaller percentage of total claims.

To hedge against this increase in claims investors flock towards assets that can be bid up by the increase in currency units. However, as cash injections into the system are highly centralised, a lot of the monetary premium gets stuck in certain assets over others.

Finding out where the new supply is going to nestle is what the modern investor does for a living.

This can be a complex game of statistics and narratives, something the ordinary man and woman doesn’t have time to bother with, nor do they have access to certain information that the elite investor, business and political class have the privilege to acquire.

Bitcoins NGU technology makes it the only asset class that anyone can own at any fraction and has outperformed the expansion of government balance sheets and protects you against these increased rates of debasement.

Since Bitcoin has a constant monetary policy and hard cap we have complete oversight on where the inflation is coming from and the expected inflation. Never in history have we had this level of certainty over the money supply as well as issuance. This forcing function of sticking to a set supply and issuance rate makes Bitcoin a great measurement tool.

We can use it to measure the increase in units versus other monetary assets or currencies like the US dollar. As you can see from the chart below, the US dollar has been on a straight trajectory down when compared to Bitcoin. Over a larger time scale, you can see how the additional supply of dollars injected into the system actually inflate the currency and how its purchasing power erodes compared to 1 unit of Bitcoin.

Bitcoins NGU is a marvel of the modern world and when any new invention is created and starts to disrupt an industry you can be sure copycats are on the way. The idea of creating private money has exploded in the last 7-8 years in what we refer to as the altcoin market or shitcoin market.

Since the success of these coins is measured in fiat currency, it’s easy to conflate this with them also having NGU technology. Surely if the price continues to increase against its unit of measurement, that means it’s doing well?

But when we extract the inflation premium of the unit of account many of these altcoins are hardly NGU technology at all, they are simply riding the speculation wave and with tiny market caps, it’s easy to move these prices around in the short term.

However, as I mentioned, monetary policy is a long play and the longer these coins exist the closer they trend toward zero.

Why does NGU not apply to other cryptocurrencies or things?

Altcoins cannot compare to Bitcoin; yes, they are using a blockchain, yes, they have a native token, but all of them have made decisions that compromise their ability for NGU.

They’ve either taken the decision to centralise and obfuscate the running of nodes which means less oversight and weaker enforcement of the monetary policy.

They could have opted for proof of stake over proof of work, so there is no tie between real-world effort and competition in creating new supply and therefore has no restrictions on their issuance.

Finally, all other currencies do not have the support of a robust decentralised network of miners and node operators and will inevitably fall victim to the same political pressures that befell governments in the past, as they generally lack the same qualities that make Bitcoin special.

Bitcoin is decentralised with no single leader or point of failure. Bitcoin also resists centralisation because you can self custody and then choose to send it anywhere in the world without trusting a third-party custodian. All other cryptocurrencies are backed by a foundation and a core of node operators or miners that are currently benefitting from seigniorage.

If they were ever to threaten a government in any way these central bodies and figures can either be co-opted or shut down. So having that threat looming, why would anyone want to put their savings into anything that could fall victim to pressures of third parties.

This lack of security and surety is why altcoins do not have NGU technology.

If we look at the price of Ethreum, the worlds biggest altcoin, you can see it’s continued to devalue against Bitcoin when measured in Satoshis.

If it requires less energy and is easier to create, it will deflate.

Bitcoin will continue to get harder to mint as more miners come online and compete for transaction fees and the ever-shrinking block subsidy. In addition, more people will also want to store their wealth in Bitcoin, and as this process repeats, any spare productivity will be locked into the network.

That value will only be pulled out of the network when viable opportunities present themselves to Bitcoin holders. As we figure out how to make more of the goods and services we require, they become cheaper under a Bitcoin standard since anything that can be produced faster and more affordable than Bitcoin will naturally deflate in price over time.

Remember the examples I showed you above comparing Bitcoin to fiat and other altcoins? Well, this isn’t only true when comparing against financial assets but everything else.

Food, services, real estate and land, everything that is easier to produce than the POW required to mint a Bitcoin, is theoretically less scarce and valued lower than Bitcoin.

Do you prefer NGU, Faux NGU or NGD technology?

Now that you understand the meaning of NGU and how it only applies to Bitcoin, it’s now up to you to make the decision. Do you stick with Bitcoin NGU tech, diversify into inferior investments or stick with a currency that has perfected NGD technology.

NGU is genuinely a revolutionary technology that, once adopted by more people, countries and institutions, will bring about abundance by unlocking the deflationary properties of technology and the entrepreneurial spirit of the human race.

PrevPreviousWhat Is Backing Bitcoin?
NextHow Many Satoshis Are There For Everyone In The World?Next