What Is Backing Bitcoin?

Home » Articles » What Is Backing Bitcoin? 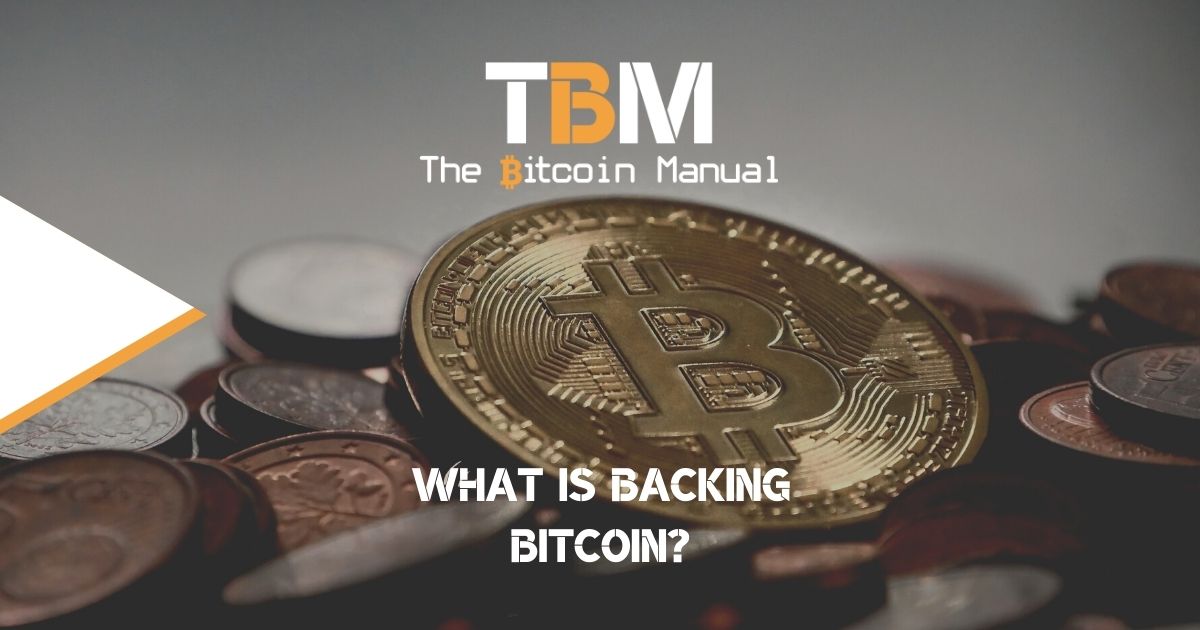 I’ve heard this question all the time, what is Bitcoin backed by? It’s just an internet currency. Bitcoin is merely A random combination of numbers and letters that could be copied.

I know many Bitcoiners may be triggered by these questions, but I think they are excellent questions to ask. How can something that only exists in the digital world be worth that much purchasing power?

What supports that value? Who is offering the guarantee I can redeem it for that value? The answer is no one. Bitcoin is a highly liquid asset. You can only redeem that purchasing power by exchanging it with other market participants for fiat currency or directly with merchants who accept it.

The price you see is the price that buyers and sellers have to agree on for any given day.

Why is backing so important?

Despite what you may think, backed currencies are not the norm; they are simply another stage in the evolution of money. We tend to assume that the fiat system we live in today is the only monetary system to exist, but there have been plenty of different experimentations.

In the case of fiat money, the paper or the claim itself had no value, so to get people to trust it, government issues had to back it with something.

A backed currency is a form of currency that comes with a guarantee that it can always be exchanged for a predetermined amount of another asset that can maintain value across time and space.

The asset of choice had traditionally been silver or gold. Still, as you can imagine, those physical metal bars would be pretty hard to trade in our current economic system, which is why paper money became so popular. It was easier to use, transfer, divide and issue and having the backing of the actual asset, it held value in the public eye.

Why does fiat currency require backing?

A currency backed by an asset typically states an implicit guarantee that 100 units of the currency can be traded for a specific amount of gold or silver. In 1879, the U.S. dollar was backed by gold, primarily due to gold’s fungibility and scarcity, essential characteristics of money.

As time went on, those claims were adjusted and eventually, the peg was broken in 1971. Since then, all fiat currencies have been unbacked, allowing governments to issue currency units as they see fit.

However, backed currencies can easily lose their credibility if citizens lose faith in it. When the government’s ability to maintain the fixed exchange rate falls, so too does faith in the currency, which we’ve seen this play out in the form of hyperinflations in the past.

What is backing Bitcoin?

Bitcoin is not backed by any asset; since Bitcoin itself is the asset, it’s simply a natively digital bearer asset. The UTXO you hold in your Bitcoin wallet is unique and cannot be copied by anyone, while it is attached to a wallet only you can control.

Since Bitcoin is not controlled by any person or organisation, nobody can make this promise. They would not gain anything by taking on the massive liability associated with ensuring the backing. No counterparty needs to support or honour the value of Bitcoin. It’s up to the owner to decide how, when and why they will trade their Bitcoin.

The lack of backing does not mean Bitcoin does not have value. An ounce of gold doesn’t entitle you to exchange it for another valuable asset. Instead, the gold is useful because the gold itself is valuable.

Individuals are generally not worried about their gold becoming worthless because the market has established that gold has value for thousands of years. People know that gold is scarce, hard to extract from the earth and cannot be duplicated or destroyed.

Similarly, Bitcoin’s combines these attributes in a digital form which is why Bitcoin requires no central party backing.

While there isn’t a central body backing Bitcoin and its price, there are certain attributes of the network that provide confidence and backing for the asset.

To secure the network, earn transaction fees, and mint new Bitcoin, miners need to set up mining rigs and generate hashing power for the network. There is a cost involved in building an ASIC miner, all the additional cooling systems, rental of the facility you set up in, and salaries and, of course, energy costs.

Bitcoin may seem like it is created out of thin air, but it is entirely the opposite. It takes a certain level of work, expertise and energy. The energy expended continues to increase as more miners compete for the newly issued Bitcoin.

This is called proof of work; miners need to submit their hashes to the network, and the one that correctly syncs a block is rewarded with fees and new Bitcoin. The cost involved in generating Bitcoin and securing the network is what makes the asset so valuable; it cannot be created without considerable effort, and cost and that backs Bitcoin.

Security of the network.

The Bitcoin network is the most powerful and most secure computing network on the planet, it has never been hacked, and transactions have never been changed. No other bank, government or fintech company can make that claim. That level of honesty, openness and assurance gives Bitcoin holders confidence that their money will not be stolen or destroyed.

Bitcoin’s monetary policy has been defined from the launch of the network and has never changed. The 100 000 strong node operators, of which anyone can join, ensure that this policy remains intact. Yes, that’s correct. Over 100 000 people actively monitor the chain to ensure that no one tries to change the rules or submit any transactions that do not abide by these rules agreed on by all market participants.

This growing army of nodes is what ensures. Bitcoins issuance rate and difficulty adjustments remain on course, and this provides backing for the network.

Since anyone can run a node with a simple Raspberry Pi device or an old computer, it makes the barrier to entry so low. Anyone can verify the Bitcoin blockchain and help support its decentralisation, which adds more confidence to the network and, in turn, confidence in Bitcoin the asset.

All node operators carry a complete list of all transactions ever performed on the Bitcoin blockchain. They can review and account for every single coin minted and where it lives on the chain, which wallet it is attached to and when it was moved. As the history of the chain grows without any issues, it adds confidence to the network.

Having a network that has never gone down and continues to record transactions without ever reversing them is a powerful statement. This provides backing the longer the history is maintained and therefore adds confidence to the network, backing the price.

Bitcoin is still very much an emerging asset class that still has some way to go before it can truly impact the lives of everyone around the globe. This idea known as hyperbitcoinisation is something every Bitcoiner holds onto; it’s why they hold on to BTC and refuse to let it go.

Bitcoin is their unit of account; Bitcoin is their store of value, Bitcoin is their circular economy, and anyone who wants to reap the benefits can participate of their free will. These early adopters are pushing their salaries, life savings, productivity and business interests into the Bitcoin network, expanding its reach.

Their use of the network increases the value of the network. Bitcoin is a monetary tool where no one gets special favours, and we all get to enjoy its NGU technology.

If you’re ready to back Bitcoin, Bitcoin will back you!