As the dominoes start to fall and Bitcoin becomes legal tender in more countries, spending it in the same way many of us are used to with fiat by tapping a card on a card reader, is paramount so it doesn’t feel too alien a concept!

This is where NFC wallets and cards will come in which will also help to keep your private keys safe in case you run in to trouble and someone steals your card.

Businesses are setting up ways to pay for goods and services with Bitcoin as the new economy is being developed so by accepting payments via NFC wallets, they’ll no doubt be in a good position to increase their sats treasury!

Let’s find out more about these wallets. 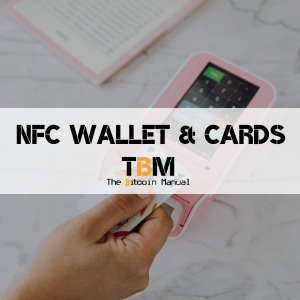 What Is NFC Technology?

NFC stands for Near Field Communication and is essentially a standard for proximity based wireless communication. In other words, if you have a receiving device that’s within a certain distance of the sending device, then they will communicate with each other.

For example, whenever you are buying something in store and tapping your card, or if you have to enter an office building or hotel room with your key card. Even your smartphone has NFC technology which you can use to make payments with on a card reader.

The range of NFC is limited to a few centimeters which is why you normally have to “tap” the receiving device with your fob or card to avoid any overspending accidents!

How Does NFC Work With Bitcoin?

An NFC Bitcoin card will work in a very similar way to how your credit or debit card works except that the Bitcoin NFC card will also have your private keys on them.

This may sound like an issue as if you lose your card, surely that means anyone can spend what’s left on it?

Well, to authorise the payment, you will need to have your smartphone too, which adds an extra layer of security with NFC technology.

You can generally top up the NFC Bitcoin card by transferring your sats from another wallet by tapping the card on your NFC enabled smartphone, then authorising it from there.

What Are The Advantages of NFC Bitcoin Cards?

The main advantages of these cards are that you can carry them around easily and use them as you would conveniently spend using your ordinary card.

Another advantage is that you can treat the NFC wallet as cold storage until a time that you want to spend it later on as it has 2 layers of security. It is effectively offline until it comes in to contact with an NFC reader.

Other smaller advantages are that you don’t need to charge it up, it’s just a card ultimately, and there’s no  KYC required to get one, unlike your regular bank card!

What Are The Disadvantages of NFC Bitcoin Cards?

With anything, there’s a degree of risk involved and the biggest risk is losing your NFC card or your private keys, particularly the latter.

Keeping your private keys as safe as possible is the most important thing and when setting up your NFC card, you will be taken through instructions on how to back these up so make sure you don’t lose them!

Losing your NFC card may not be the end of the world as long as you have your keys backed up – you can just replace your card should you misplace it or it gets stolen.

Where Can I Get An NFC Bitcoin Card?

Below is a list of companies that manufacture NFC Bitcoin wallets that we’re aware of and we’ll add to it as we discover more.

These aren’t referrals or endorsements, you will still need to DYOR on these products: