How Does Bitcoin Mining Actually Work? 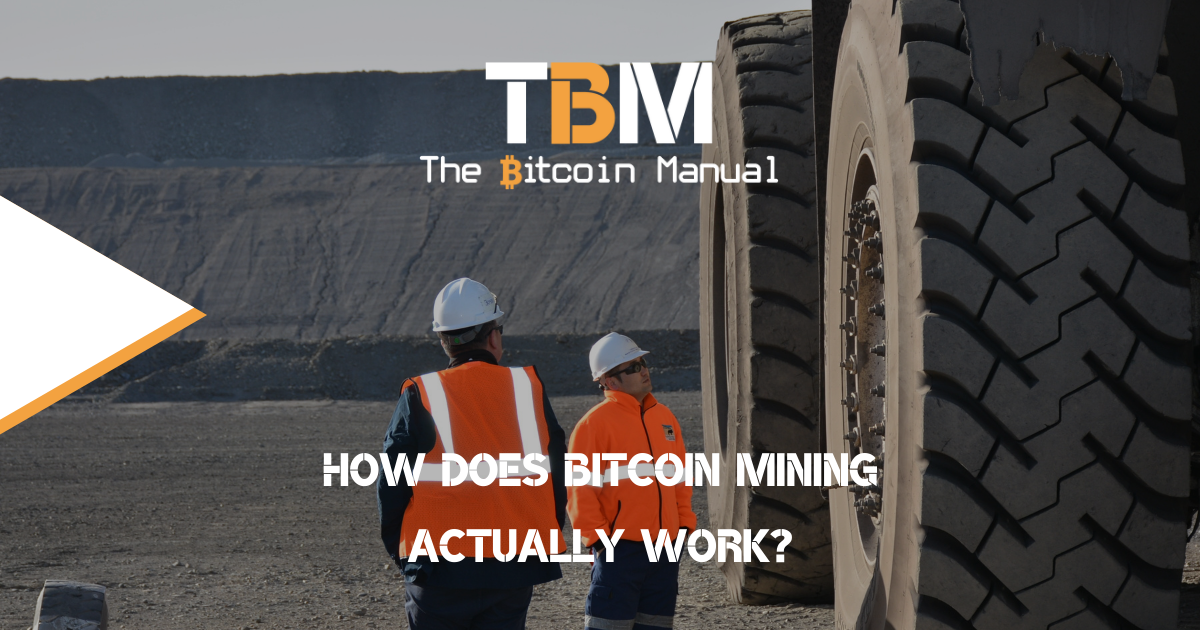 Ah Bitcoin mining. The so called, “dark art” and mysterious phenomenon that has brought a lot of FUD articles from mainstream news outlets due to some grievances with energy consumption.

Is it a network of supercomputers, doing complex calculations that are so complicated, you’d need 60 years of research just to get your head around it? Why does it use up so much energy? Why is it necessary? Isn’t it a waste?

The reality is, it’s not dark and mysterious at all and on the surface, is actually a pretty simple concept to grasp. When you “boil” it all down, Bitcoin mining has two sole purposes, which are to:

If you want a really technical description of Bitcoin mining, you can find this elsewhere but this will be a simplified version of events to help get our heads around it, whilst dispelling future energy FUD.

Imagine we’re playing a game of “roll the dice” where I give you a regular six sided dice and need you to roll a 1 to get a reward in less than 10 minutes. The act of rolling the dice in this analogy is the process of Bitcoin mining known as hashing.

Once you roll a number 1, I can then check that it’s the number 1 and then give you the reward. As I am the only person in this game (blockchain) other than you, that means I’m the only person who can check (node).

However, a 1 in 6 chance of hitting the number is not that difficult so I give you a new dice that has 20 sides. I’ve now just increased the difficulty of you rolling a 1 in less than 10 minutes.

Now we have a new problem. It’s taking you longer than the target of 10 minutes to roll the 1 so I can either give you a dice with less sides in it (difficulty adjustment) or more players (miners) join in to roll the dice to speed things up (higher hash rate).

At this moment, we have 10 players rolling their own 20 sided dice to get the number 1 but it’s still just me checking so more people are needed to act as judges (nodes) to verify that a miner rolls a 1.

This is a simple analogy but the conditions of the game are now set:

In our analogy, the energy comes from the humans who have to expend energy to roll the dice. This is their proof of work but you also have the judges that use a little bit of energy to verify the number is being rolled.

All in all, this combined energy provides security that the rules of the game are followed and this is the same for bitcoin mining. The energy used is a measure of the security of the network.

So if there are less players and judges of the game, less energy is used and therefore, the security isn’t as high. The opposite is true when more players get involved.

Sure, this is an over simplified version of how things work but mining is more of a lottery than it is random computers doing complex calculations. And I’m not a software engineer so I don’t know the ins and outs of cryptography!

However, now that there’s a point to the energy consumption providing security to the network then we can see why Bitcoin is hungry for energy and why mining operations look for cheap forms of energy.

These cheap forms of energy are trending towards lost energy such as gas that is flared due to excess amounts being produced or stranded energy from renewable sources like geothermal or hydro. Some would argue that’s even good for the environment.

Now you have a bit more of an idea of the mining process, there are different options available for you if mining is something you’d like to get involved with.

Thankfully the process of rolling random numbers is done automatically by specialised computers called ASICS so you don’t have to do it yourself!

Depending on your situation, whether you wanted to mine at home, with a company hosting it for you, on the cloud or in a mining pool, check out our dedicated mining section of the site here and start rolling the dice!

British bitcoin pleb falling down the rabbit hole and willing to share every bump, scratch and knock along the way
View more articles from this author
PrevPreviousWhat Are Trampoline Payments?
NextWhat Are Channel Factories?Next