What Are Trampoline Payments?

Home » Articles » What Are Trampoline Payments? 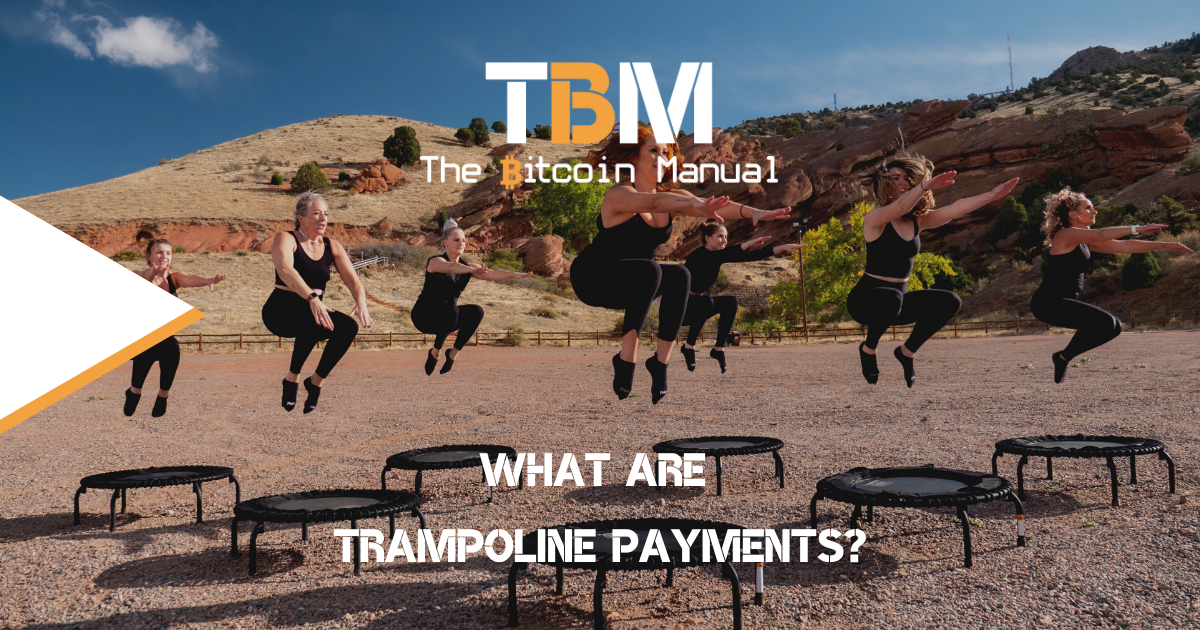 The Lightning Network has been a significant step forward in providing an environment for developers to try new things and deliver applications and wallets with more tools to leverage bitcoin in their products. Scaling the bitcoin network without giving into centralisation was never an easy fix, even with the Lightning Networks promise. It does have some limitations that need to be addressed.

One of the issues with using Lightning in a non-custodial manner is that you need to run your node that constantly remains online. If your node is not connected to the internet, your channels will be offline, and you will not be able to route payments to and from your wallet.

This is a bit of a pain, especially if you’re not in close proximity to your node, to check on issues or re-sync it.

Due to these complications, many opt to use Lightning with custodial wallets or exchange wallets that support Lightning, which defeats the primary purpose of the Lightning Network. To offer users the ability to interact with bitcoin in a non-custodial manner offering cheaper and faster transactions through this second layer of an interconnected network of payment channels.

The promise of Lightning was the fulfillment of daily commerce, where you would walk into a coffee shop, place your order and settle your payment with a QR code, LN-URL or Lightning invoice and have it settle immediately.

It sounds great and, in practice, can be done if all factors are running with perfect uptime, but we know that is not always the case.

Now let’s imagine a more realistic situation, you head to the coffee shop and want to make your purchase, but as you order, you realise your node is not broadcasting the correct state.

Meanwhile, customers are queuing behind you, waiting to pay for their coffee and wondering why this is taking forever. Now you look like the smartarse that wanted to pay with bitcoin and annoy everyone.

Now you gotta either have cash on hand or dox yourself through the traditional digital fiat system; well done on being a complete tool.

So, you ask, what can be done to spare your blushes? Trampoline payments of course, it may not jump you ahead of the coffee queue, but they may help your Lightning payments reach a settlement with a lot less hassle.

The way Lightning currently works, the sender calculates the route from its node to the receiver’s node. This means that the sender’s node must have an updated network of nodes, it might not be connected to the receiver directly, but it finds a connected path in the network.

Having to path find might be fine for Lightning in its current state, but it won’t be if the number of channels expands into the millions due to adoption.

What are trampoline payments?

Trampoline payments is a new suggested way of outsourcing that aims at having lite clients outsourcing the route computation to trampoline nodes, nodes of higher Memory, bandwidth, and computation power. This is advantageous for lightweight LN clients that aren’t able to track the full network graph because they’re often offline or run on underpowered mobile hardware.

Trampoline payments are a type of payment where the spender routes the payment to an intermediate node who can select the rest of the path to the final receiver.

Fees for trampoline payments will be higher than that of a standard lightning transfer because the trampoline node needs to be able to forward your payment to any node in the network and collect a small fee for its route calculation work.

Depending on the path the trampoline node takes, it could be 1, hop, or several, and the longer the path, the more fees you’re going to have to pay. So while it adds a layer of convenience for Lightning users, you have to pay extra for it.

If you want to get a deep dive on how trampoline payments and nodes would work and how multi-trampoline routing adds to the Lightning ecosystem, then we recommend checking out the video below.

Trampoline payments on the lightning network explained by Christian Decker

South African bitcoin pleb falling down the rabbit hole and willing to share every bump, scratch and knock along the way
View more articles from this author
PrevPreviousWhat Are Turbo Channels?
NextHow Does Bitcoin Mining Actually Work?Next