What Is A Bitcoin Blow-Off Top?

Home » Articles » What Is A Bitcoin Blow-Off Top? 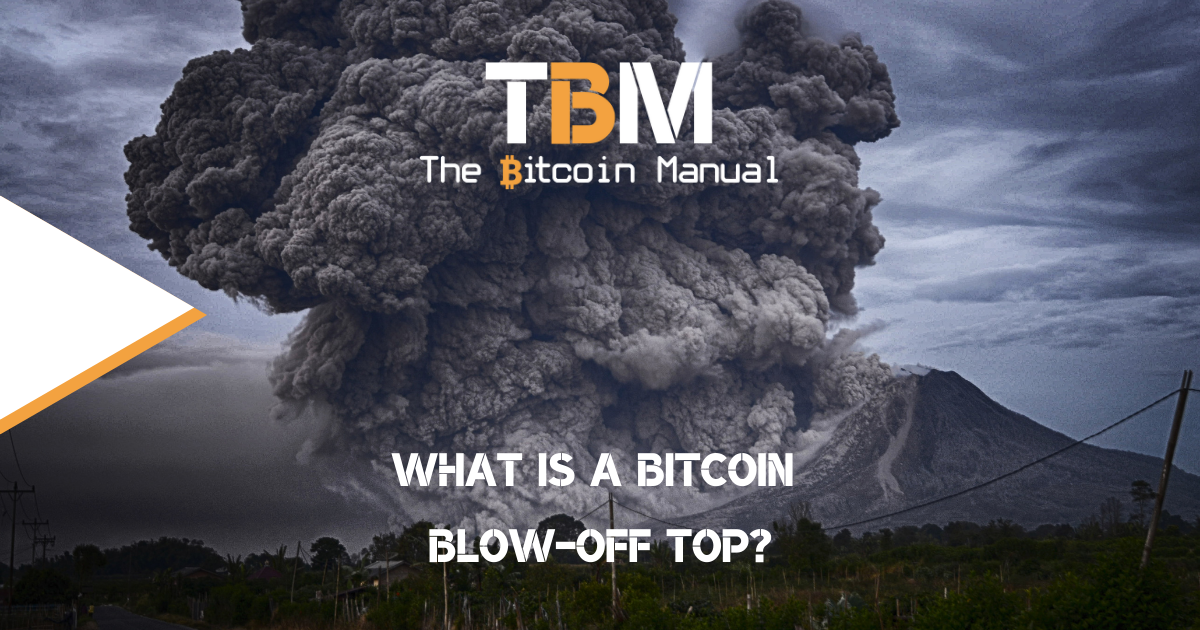 One of the most exciting and yet scary times in a new bitcoiners life has to be their first full recycle resulting in a blow-off top. Watching your net worth skyrocket in unrealised gains and then seeing all those gains evaporate in months is an exhilarating and humbling experience.

If it’s your first bitcoin blow-off top, it can see you disheartened as you chased the price up only to see yourself underwater. Some will sell off, take their losses and move on, while others may stick around, double down acquire cheaper bitcoin to lower their cost basis.

How you handle your first blow-off top can be a definitive moment in your bitcoin journey, so what is it all about, how does it work, and what should you know about it.

What is the blow-off top?

A blow-off top is a trading term used to describe a chart pattern that shows a steep and rapid increase in bitcoins price and trading volume, followed by a steep and rapid drop in price—usually on significant or high volume. The rapid changes indicated that the market at the time was way overbought. The intent behind a blow-off top also called a blow-off move, or exhaustion move can be the result of an unwinding of leverage, bearish news, or pure speculation.

A blow-off top is a consistent downtrend from the all-time high for an extended period and should not be confused with a bitcoin flash crash.

If it’s your first cycle, it can be easy to get swept up by the overconfidence of the market and the speculative fever. Everyone is making money in unrealised gains, and dips are short-lived, giving even more people a reason to keep piling on. As investors continue to throw capital into the market, chasing new highs, taking out leverage, and piling on risk, eventually, there will come the point where buyers are exhausted, and traders want to secure profits against a smaller portion of buyers.

Once that revert happens, there can be a bunch of panic sellers and margin calls triggered, further suppressing the price, and we see a rapid descent from the all-time high.

Some common characteristics of blow-off tops include:

It won’t be the last blow-off top

Bitcoin’s price discovery works in cycles, as with each halving, the inflation rate of bitcoin decreases, reducing how much supply can be dumped on the market. The supply squeese acts like a forcing function for the price, and the market tries to find a new equilibrium for the amount of supply versus the amount of demand. This can result in a speculative stage known as the bull market, where bitcoin can be overbought, creating the conditions for a blow-off top.

Some claim that these cycles will eventually break due to a supercycle which will see bitcoin’s price break all resistance, but this remains to be seen.

Bitcoin has seen several blow-off tops, with the most recent being the 2021 and 2017 retracements.

In 2017, bitcoin was seeing a steady price rise. Early in the year, it traded briefly above $1,000 and briefly below $800, but then started to creep higher out of that range. By mid-year, it was approaching $3,000. By September it tested $5,000, and by October it tested $6,000. At this point, the blow-off hadn’t even started, even though the price was already higher by several hundred percent.

Volume started picking up in November but increased more in December. In December alone, the price went from $10,000 to nearly $20,000.

In 2020, bitcoin was seeing a steady price rise. Early in the year, it traded briefly above $11,000 and briefly below $6 000, but then started to creep higher out of that range. Volume started picking up in April and again in November reaching over $68 000 in both those months before losing 50% of those gains.

This was by far the biggest dollar gain in the price in bitcoins history.

We are due for a number of halvings to come, and these supply reductions could result in another blow-off top in the coming years.

How do feel about bitcoin blow-off tops?

It’s important to remember that markets evolve over time and cycles exist and are ever-changing. While some hodlers might not care as they simply dollar cost average into the market, sure you’re buying the top on some days, but as the price recedes you’re averaging down your position.

It’s important to not get swept up in market cycles and fall for FOMO, bitcoin is a long term purchase and understanding the bitcoin market cycle and the phase of the market is a necessary and prudent approach when determining the best time to buy or at what points to set limit orders so you can acquire more bitcoin for your buck, regardless of if we’re in a blow-off top or highly volatile phase markets.

Are you the type to prefer the bear or bull market phases or do you like the quiet slow and steady grind of the consolidation phase? Let us know in the comments down below.

South African bitcoin pleb falling down the rabbit hole and willing to share every bump, scratch and knock along the way
View more articles from this author
PrevPreviousHow The Altcoin Layer Two Scam Works
NextWhat Is Bitcoin’s Next Difficulty Adjustment?Next