What is the “Consolidation Phase” in Bitcoin?

Home » Articles » What is the “Consolidation Phase” in Bitcoin? 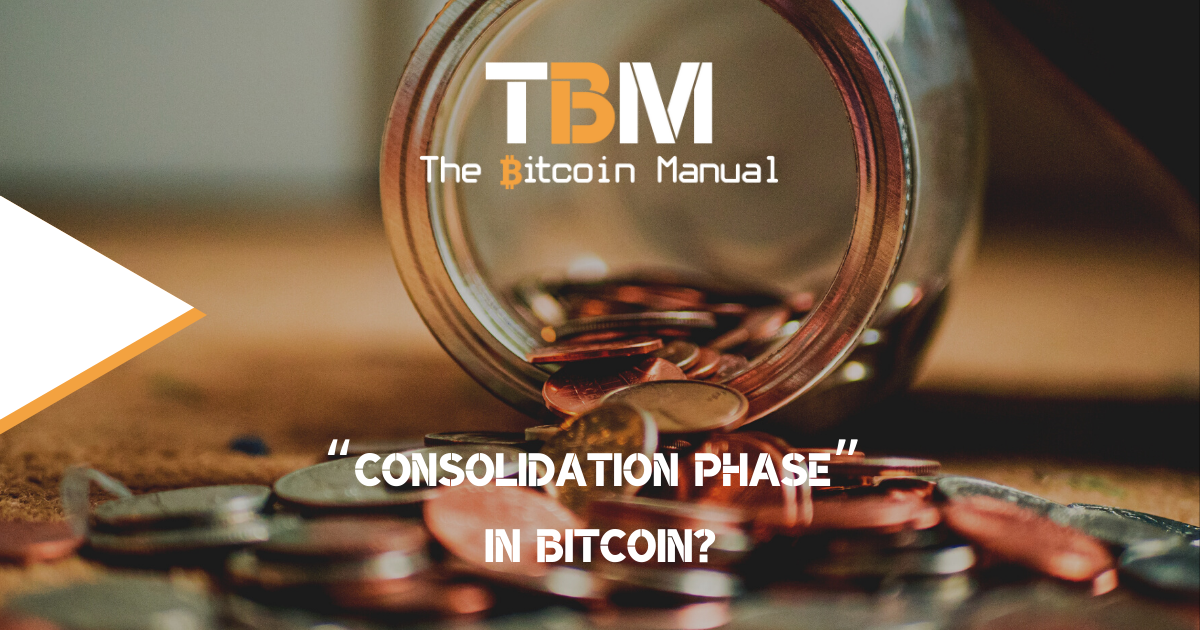 Getting into bitcoin can seem like gambling at first, but if you pay attention to the media cycle, they often only take note of bitcoin during bear or bull market rallies, when volatility is at its peak. Headlines often focus on prices hitting certain psychological milestones or ranges in massive percentage points such as 30 -70%.

If you’re not fully entrenched in the bitcoin space, you could be mistaken for thinking that the price of bitcoin is constantly fluctuating with massive price swings.

However, there are relatively quiet phases between those rallies that are referred to as consolidation periods. During these times, a large portion of market participants reduces their activity in the market, having either taken the profits they wanted or having been hurt by a retracement in the price.

As a lack of participation finds a new equilibrium with the amount of bitcoin supply coming online every day through miners, we tend to see a price band forming for bitcoin.

What is the consolidation phase?

The consolidation phase in trading is a term used when bitcoin appears to neither go up nor down in a precise pattern. Instead, the pattern goes sideways (horizontal), with the ups and downs offsetting each other.

In these consolidation phases, bitcoin trades within a narrow range, for example, $9 000 to $9 500, which makes it hard to make a significant profit on trades, as volatility is dampened compared to normal phases, where prices could swing much more, for example, $8 000 to $12 000 within 24 hours.

During the consolidation phases, specific price points prove to provide considerable support, as in our example above, as soon as the bitcoin price drops below the $9 000 phase. Orders below this price point are bought up, as hodlers see it as a bargain and exhaust the supply coming on to the market willing to sell below $9 000.

On the other end, traders who want to use bitcoin as a mechanism for either dollar profits or satoshi profits will look at certain exit points; let’s say $9 500 shows considerable resistance and cannot break out; any liquidity at that price point will be sold into forcing the price back down.

During these consolidation times, we will also see traders make larger-sized trades to try and maximise on the trading range available or use leveraged bitcoin trades to try and improve their potential profits.

Understanding consolidations in the bitcoin market

Periods of consolidation or crab market phases can be found in price charts for any time interval and time range; it can last a few days all the way to up to weeks or months. Having a consolidation phase does not mean that there won’t be certain breakouts from the range, such as bear market rallies.

A consolidation pattern could be broken for several reasons, such as the release of materially important news or the triggering of a succession of limit orders. But for the most part, the price remains within the tight range.

During these consolidations, technical traders look for support and resistance levels in price charts and then use these levels to set buy and sell decisions, to try and extract profits from the market.

When bitcoin begins to consolidate, the dopamine highs from massive price rallies or drops, and the success of always buying the dip fade, and participants leave the market. The ones that do stay have to contest the current limitations they have on extracting profits, so they start to tack on more risk.

You’ll see traders begin to use leveraged trading strategies, options trading, or take positions in futures contracts to try to edge out even more potential profits.

If you’re like me and you don’t want to play the ape games and want to secure bitcoin for the long term, the dollar cost averaging method, be it daily, weekly, or monthly, works even better in a consolidation phase. As the price fluctuates, you know you’re getting a steady stream of satoshis without much effort.

You can also maximise your satoshi stacking by setting a few limit orders on the lower bound of the range, and when it hits, you can pick up a few sats at a premium.

Take the time to focus on other parts of bitcoin

During the so-called “boring” times when price action isn’t on everyone’s lips, you may want to use this time constructively. Instead of focusing on trading or cheerleading the great decision you made, you may want to focus on improving your bitcoin operations.

Try learning how to run your own bitcoin node, acquire a bitcoin hardware wallet and store some of your satoshis with a set of offline keys, or play around with the growing number of bitcoin-focused apps available today.

How do you feel regarding bitcoin consolidations?

It’s important to remember that markets evolve over time and cycles exist and are ever-changing. While some hodlers might not care as they simply dollar cost average into the market, others are looking to skim a little more off the top.

Understanding the bitcoin market cycle and the phase of the market is a necessary and prudent approach when determining the best time to buy or at what points to set limit orders so you can acquire more bitcoin for your buck, regardless of if we’re in a consolidation or highly volatile phase markets.

Are you the type to prefer the bear or bull market phases or do you like the quiet slow and steady grind of the consolidation phase? Let us know in the comments down below.

South African bitcoin pleb falling down the rabbit hole and willing to share every bump, scratch and knock along the way
View more articles from this author
PrevPreviousWhat Are The Main Bitcoin Anniversaries Each Year?
NextHow The Altcoin Layer Two Scam WorksNext