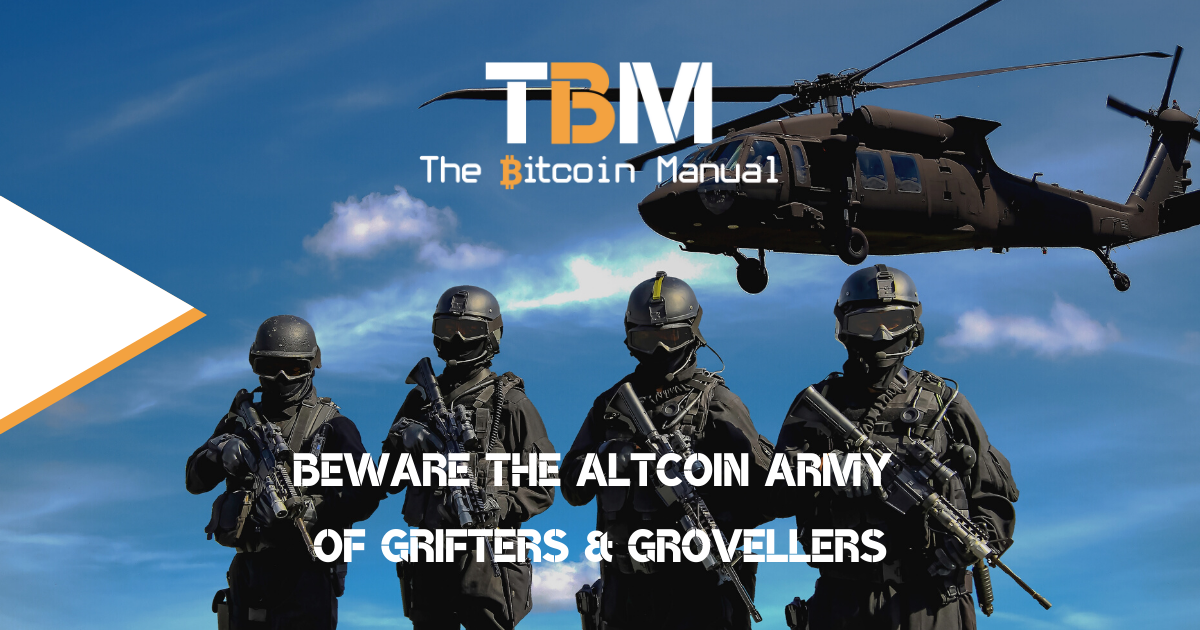 We all have different paths into bitcoin; some lucky few find bitcoin and stick with it, and the rest of us have to go through the labyrinth that is the altcoin market. Having had my days of “shitcoining” myself, I know first-hand the various pitfalls that can be put in your path to ensure you fall victim to either direct losses or opportunity cost loses versus simply holding bitcoin.

If you don’t take the time to do the homework, which does take months, even years, you won’t understand the difference between bitcoin and the myriad of different digital tokens that spring up every month.

The game is to keep you distracted

The digital asset space relies on information asymmetry; they rely on our ignorance and their ability to obfuscate the truth and provide colourful narratives that hide the truth. The longer they can keep you believing their half-truths and overembellishment of their product, the longer it will take for you to dig into them and compare their obvious failings when compared to bitcoin.

It is not enough to have compelling narratives to keep the wool over people’s eyes and encourage them to part with their money; there also needs to be an army of soldiers who will willingly push these stories to provide an element of credibility and suck you into the madness of crowds through tribalism.

Altcoin projects and their manufactured reality

They will use a series of press releases, studies, partnerships and unproven use cases to feed you hopium constantly. To keep you on a steady diet of content, you can’t debunk easily and maintain the belief that you made the right decision parting with your hard-earned money.

All these constant messaging is required to maintain liquidity for their token sales so these founders or inner circle can profit from selling you an unfinished product. As the game goes, you get their token for exposure to some future where this product eaches a specific price point or mass adoption.

Now cleverly crafted words, theoretical studies, graphs, and charts are the arsenal; you still need an army to use that ammo. In the altcoin game, there are two distinct groups that provide the manpower for the altcoin puff piece messaging to propagate.

They are the grifters and the grovellers.

The guard of grifters

The first altcoin shills you’ll contact will most likely be from the influencer class, founders, developers or venture capital fund managers. They have a direct interest in pushing their narratives, having issued themselves large amounts of the coin or received a preferential amount of coins on back door deals.

Now that they’ve established a firm grasp of the ownership of the network, the game is about getting as many token holders to reduce your exposure to the network. You’ll see this in the form of articles, podcasts, interviews, sponsorships and paid content all designed to convince you that certain projects will be able to outperform bitcoin.

The next battalion is made up of the ordinary retail investor who has bought the lies, and because they’ve taken a position in this coin, they are obviously biased toward positive news. They share updates, dismiss critiques of the project and act as a word of mouth amplifier for the content created by the grifter class.

They try to ingratiate themselves within the community either to earn or receive additional tokens or thinking that if they support the project with their voices and roping in friends and family, they will be the reason the project succeeds.

These useful idiots aren’t necessarily malicious, merely misinformed, but that doesn’t mean they cannot do real harm to those they rope into these failing projects.

If you ever try to question their narratives that they have not thought about deeply and merely regurgitate, you’ll come up against a wave of insults or deflations. Once you start to question their conviction in the project and make them think, you’ll only anger them, and the conversation will devolve into a screaming match.

This cohort refuses to admit they were duped and would much rather double down on their mistakes, so trying to reason with them will be a losing game.

Your wealth is under attack

Make no mistake; these are treacherous waters you find yourself in; people will say and do anything to ensure wealth is transferred from your pocket to theirs through this convoluted trickle-up system. Once you get caught in them, it can be pretty hard to pull yourself out, either due to the sunk cost fallacy or the idea that eventually, your luck will turn around.

The goal of these systems is to keep you away from bitcoin long enough for others to acquire it or, worse, to turn your wealth into bitcoin while you hold their leveraged derivatives tied to bitcoin’s price movements.

Bitcoin is the flight to safety, and it’s the pristine digital asset. Because it’s so scarce and hard to acquire, those who want to avoid the proof of work system will side with these alternative digital assets, where riches are promised or instead implied.

Number go up technology is hard to beat

Have you been wrecked in the altcoin market? What did you learn from your time trading these other assets? Let us know in the comments below; there is no shame; we’re all here to learn and share each other’s experiences so that others may not make the same mistakes through the body of knowlege we create.

South African bitcoin pleb falling down the rabbit hole and willing to share every bump, scratch and knock along the way
View more articles from this author
PrevPreviousWhat Is Bitcoin’s Next Difficulty Adjustment?
NextWhy Staking Is Not HodlingNext