Why Staking Is Not Hodling

Home » Articles » Why Staking Is Not Hodling 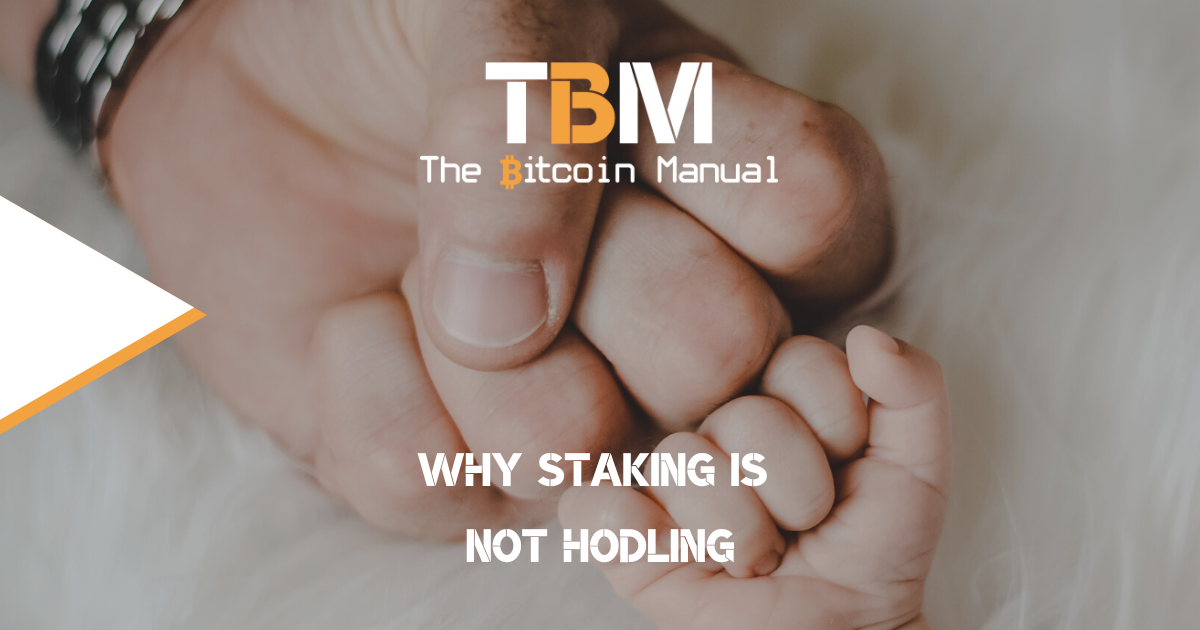 The introduction of bitcoin has created a brand new asset class, and with it comes some serious questions on how we create money, how we value different assets, what gives it value across space and time, and how we invest the product of our labour. Bitcoiners argue that having a form of money that cannot be diluted and can be stored across space and time is a risk-free rate.

As long as you hold on to your coins, you enjoy price appreciation from bitcoins NGU technology. The cornerstone of those relative rewards in purchasing power is the ability to hodl.

Bitcoins’ proof of work system ensures a cost attached to the creation of coins as competition to secure the network improves and the energy required to do so increases; it provides a forcing function that increases the value of coins. Those of us who hold on to those coins from previous years when the competition was low will pocket a premium.

Proof of work has come under scrutiny for its energy production, and the push towards proof of stake claims itself as a viable competitor. While alternative coin proponents have come up with their own systems to compete with proof of work and to get people to buy into it, they’ve conflated the concept of hodling with staking.

To dispel the notion that proof of work is useless, let’s look at hodling versus staking and see how they stack up, shall we?

The term ‘HODLing’ comes from a typographical error of the word ‘holding’. HODLing refers to the holding of a particular cryptocurrency for a long time; some even refer to it as “Holding on for Dear Life”. An example of HODLing could be buying bitcoins today with the sole intention of not using them for the next few years.

Investors using the HODLing strategy are unaffected by the fluctuations in the market value of bitcoin. They believe in the long-term appreciation of the currency’s value and consider reselling it at a higher price in the future.

What are the benefits of hodling?

Sitting on your money seems like a foreign action since most of us are used to keeping money with a custodian and getting paid for the risk, be that with savings accounts, ETFs or entrusting funds to purchase other investable assets with your money. However, in a risk-on world, taking risks off the table can provide outsized rewards, and that’s what bitcoin hodling can offer you.

When you hodl bitcoin, it’s not simply about not spending the coins but removing any third-party custody risk involved with that bitcoin. You want to remove it from an exchange or custodial wallet and place it in a non-custodial wallet where you have the sole rights to those private keys.

When only you can sign a transaction to move that bitcoin, you are in full control, and no one can touch your bitcoin if you apply the proper security measures. In addition to that, you have the assurances that bitcoiners worldwide will consistently enforce the 21 million hard cap, so your position in the network will not get diluted.

Staking, on the other hand, is when a user takes their cryptocurrency holdings and locks them into a pool, smart contract, or with a validator as capital to secure the network in a proof of stake (PoS) system.

In return for locking up capital, these users will be rewarded with either block rewards from new inflation or, in some cases, fees from the network. The process of staking involves locking up your crypto holdings as collateral for the network resources to compete for and to add the next block to the chain.

In a project that is based on a PoS blockchain network, a stake represents a voting right that is earned after purchasing a minimum amount of coins. The more coins you hold, the more voting rights you are entitled to and can influence network decisions.

Staking is also a way for projects to create artificial scarcity for their coins; when more coins are locked up, especially with forced lock-up periods or taxes involved in unlocking. The idea behind staking is to force a reduction in the float supply and, in theory, should improve the price with fewer tokens available for sale.

What are the pros and cons of staking?

Despite all the talk around staking, the only benefit for the investor is the ability to increase the number of coins you have at the end of each staking period. As someone who stakes coins, you are diverting inflation or transaction fees from the network to your wallet in a bid to increase your position. As you increase the number of coins you have, you can look at ways to sell that additional inflation while keeping your original position intact or sell a larger position in the future for a more significant profit.

The risk of diluting your stack

While you can gain a percentage increase in the native token for staking your coins, there is no guarantee that the additional inflation will be enough compensation for creating new inflation diluting the market. Unless new buyers are coming in to purchase those coins, your staking reward may net you a zero or even negative return in purchasing power over time.

The risk of no liquidity

If you’re staking a network and earning more coins, you still need new users coming in to purchase those tokens from you; if there is a lack of buying pressure for the token, the new coins you’re earning aren’t of much use to you as you cannot realise the value of them with anyone willing to take those coins off you at the highest market price.

In a worst-case scenario, you could also be stuck in a staking coin where there isn’t enough liquidity to remove your entire stake, and exiting the position becomes impossible in these honeypots.

The risk of complexity

Hodling bitcoin is pretty easy once you get the hang of it, and since nothing changes, you start to become more confident in the process and moving coins to your cold storage. Staking is different; every network has another wallet, method, or restrictions involved. You’ll have to learn how to use these different methods, evaluate the risk with each staking method and keep track of all the staking chains you’re in, and juggling the returns.

To me, that sounds far more like an active investment strategy than the passive operation of hodling.

The risk of opportunity cost

Staking isn’t a foolproof plan toward profit, and like any investment, it comes with opportunity cost; once you lock funds into a network, you are tied to those returns. Since those funds are locked, you may not be able to take advantage of certain moments of volatility in the market, such as picking up coins cheaper.

The risk of competition

You might be staking in today’s best-paying chain, but that doesn’t mean it will always be the case; as PoS networks get older, they have to reduce the yield that they had teased users into getting in the first place. New networks come along and offer greater teaser rates to attract capital into their ecosystems. You may now be stuck in a network with reduced rewards while other users have long since moved on to go and farm the returns on the latest altcoin promising investors the world.

While bitcoin hodlers can sit around and continue to stack and add to their position, stakers need to constantly figure out which network has the best yield, move coins around, and create new taxable events.

The security risk of staking

Security is another distinction between HODLing and staking. Those that HODL often do it using hardware wallets or air-gapped wallets which they have complete authority over the funds. On the other hand, sticking is only conceivable with a hot wallet since you need to sign the transaction with your smart contract or validator. In the case of staking the user may or may not have complete control over the funds and if the smart contract or validator is compromised so too would their coins. If necessary precautions are not followed, this creates a security risk that might lead to money theft.

Staking is still taking on risk

Hodling bitcoin is a passive investment strategy where you take all risk off the table and you’re betting on price appreciation, staking you have to consider all the factors we’ve listed above. While you could earn more coins, there is no guarantee that staking another network’s coin will outperform the CAGR of bitcoin.

Proof of stake networks have blown up in the past and there will be more that will blow up in the future, as they add more risk to their network to try and attract capital and outperform bitcoin.

If we look at all the risks involved in the custody of altcoins, you have to consider that it’s pretty pointless as it offers you zero ability to take risks off the table.

Do you take self custody when you hodl?

Now that you know the difference between holding and staking, does hodling sound more appealing to you? It may seem like a simple action, but with temptation all around you, hodling can become increasingly difficult.

If you’re new to bitcoin and have not ventured down the hodl and self custody rabbit hole, what is stopping you? If you’re already self-sovereign, how has the experience been since you took hold of your funds? Let us know in the comments down below, we’re always keen to hear from bitcoiners from around the world.

South African bitcoin pleb falling down the rabbit hole and willing to share every bump, scratch and knock along the way
View more articles from this author
PrevPreviousBeware The Altcoin Army Of Grifters & Grovellers
NextLet’s Talk About Altcoin ExperimentationNext