What Is Bitcoin Used For?

Home » Articles » What Is Bitcoin Used For? 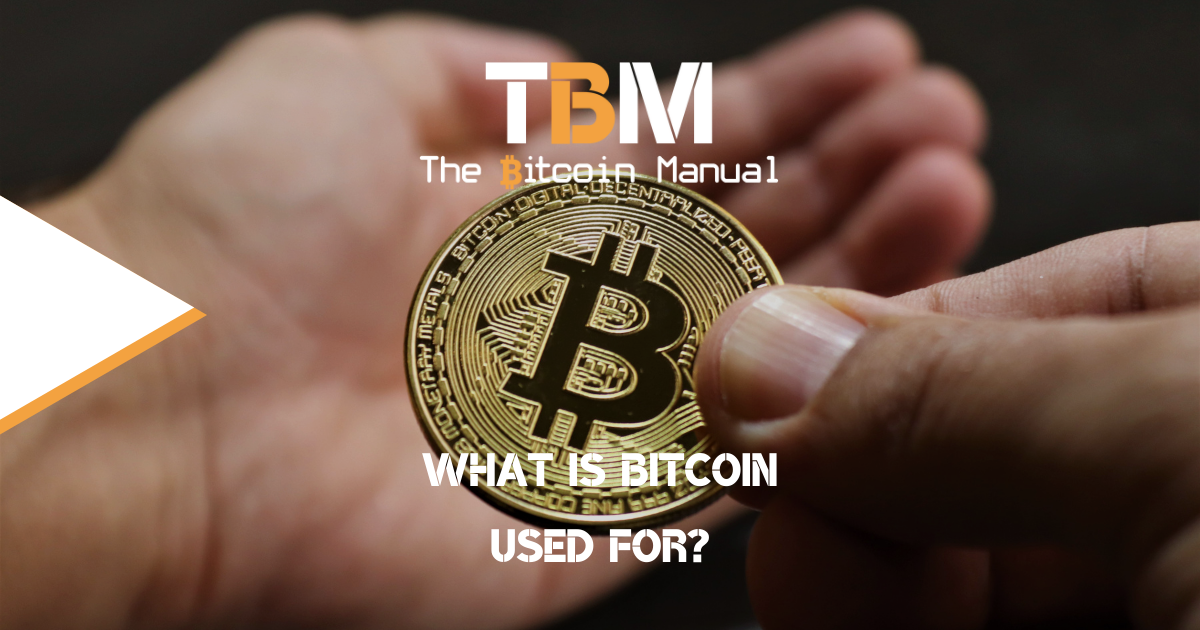 Now that’s not an easy question to answer as it really depends on your personal situation and how you interact with Bitcoin. To come up with one specific answer is impossible when Bitcoin has been called many things such as a:

Note: The incorrect and nonsense names Bitcoin has been called have been crossed out in the list above

What Shapes Your Perspective

The list goes on and you can see just how different perspectives are formed. For me, our thoughts of what Bitcoin is used for really depends on four key things:

As you go further down the rabbit hole and find things out for yourself with an open mind, the picture becomes much more clear as to what Bitcoin is and I can only draw from my own personal experience over the last 4 years.

Let’s dive a little more in to these four areas and see how they shape each other.

Understanding of What Bitcoin Is

Sure, you can learn about it’s fundamental blockchain technology, or there’s only 21 million Bitcoins as defined by its protocol and how mining works.

However, these are things that you will probably want to look into more after you’ve taken yourself back up a few levels and considered the bigger picture.

Really, the first thing to understand is what fiat money is, where it comes from, why we use and how we came to use it.

No, it’s not sexy nor is it glamourous but having a high level understanding of Keynesian and Austrian economics, along with what sound money is, is your ultimate start point.

Then you can see why Bitcoin was created, where it fits in and how it can be used – we have curated a reading list of books for you to help get you started.

What can really make or break your Bitcoin journey when you first get started is where and how you first heard about it.

Was it some clickbait headline that caught your eye? Perhaps some moonboy online blowing smoke up their own ass with unrealistic price predictions? A laser-eye anon twitter account? FUD from mainstream media? Or maybe it was one of your ordinary pleb friends at the pub, doxing his holdings and showing off to everyone?

As you can see, there are many different ways you will have first heard of Bitcoin and it can shape your first impressions. And this is just a short list, there are many other ways I’m sure.

If your original source was pretty negative about Bitcoin then it’s more than likely you will be put off and not continue to DYOR.

On the other hand, a more neutral, educational or positive source might convince you to explore more, continue your learning and join a growing number of people who are going down the Bitcoin rabbit hole.

This will then lead back to point one above and will help you make your own decision about where Bitcoin fits in and how it can be used.

Your bias will generally depend somewhat on your personal situation but will also be formed by points one and two above on top of any paid opinion pieces from places such as mainstream media, politician or central banks.

It apparently takes less than a second to make a judgement on something for the first time so that doesn’t leave much time at all to consider things from a neutral standpoint!

If your primary “trusted” source is biased then it’s likely that your opinion will be of the same nature as theirs but as the saying goes in the Bitcoin world, don’t trust, verify.

Once you find out things for yourself and understand why either you or your source has that bias, your initial judgements will be challenged and your curiosity will be sparked.

There’s no point in just having a theoretical understanding of Bitcoin without putting on those orange wellies and getting knee deep to experience it yourself.

When you start buying, spending, earning, gaming, mining and just using Bitcoin, your experience grows with it and you will automatically learn even more about it.

There’s plenty of Bitcoin communities around these different sectors who are all really helpful and some will give you some sats to play around with.

If you think short term and only look at the price charts then you’re missing the bigger picture and this is not a get rich quick scheme.

What Is Bitcoin Used For?

Bolstering your knowledge, experience and challenging your initial source of information and biases will let you form your own proper judgement on what Bitcoin is used for.

For me, after a few years of learning, trying things out, getting my orange wellies on and reaching out to various Bitcoin communities, what I see Bitcoin being used for is two fold.

From a money point of view, I see it as a true form of money that can be held as a store of value to buy things you want at a later date (years), providing a life raft to escape from the talons of inflation.

From a technology point of view, I see it as a decentralised global system with a known monetary policy that can’t be changed and can facilitate cross-border payments instantly with the lightning network.

How this will shape up in the next decade is anyone’s guess. We could see hyperbitcoinization in the next generation as the younger, more tech savvy generation start filtering in to the working world.

If Bitcoin then becomes the money of the world, it will be used to buy anything and everything. Who would want to still be on 0 sats by then?

British bitcoin pleb falling down the rabbit hole and willing to share every bump, scratch and knock along the way
View more articles from this author
PrevPreviousHow Shitcoin Casinos Keep You Poor
NextHow To Setup A Blockstream Green WalletNext