Does Bitcoin Have A Limited Supply?

Home » Articles » Does Bitcoin Have A Limited Supply? 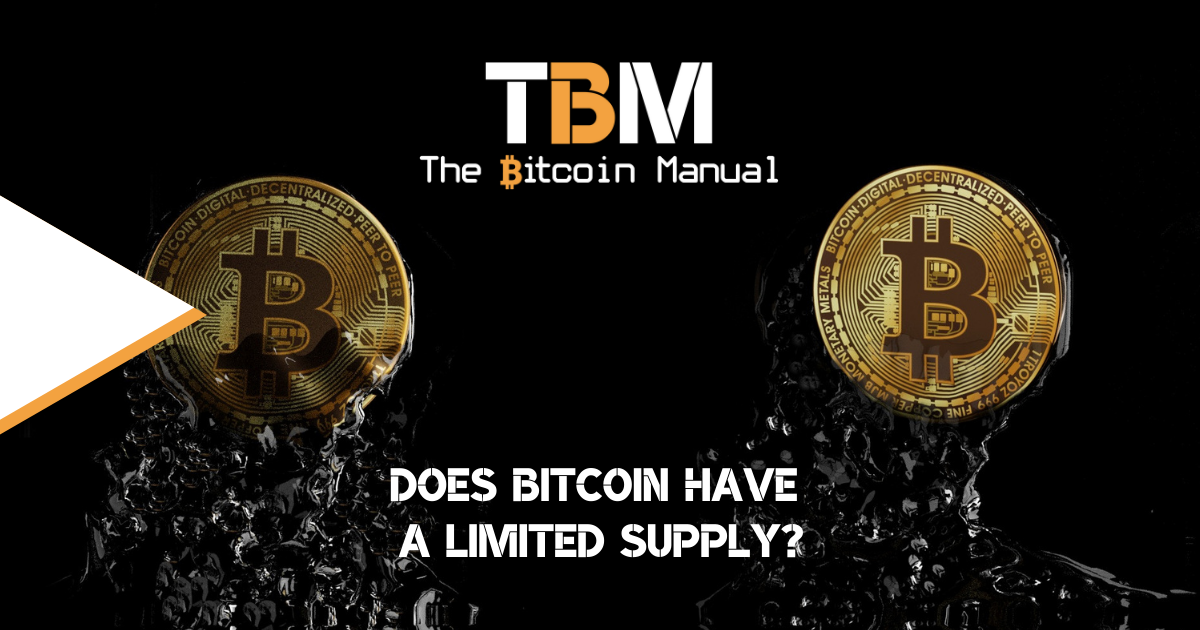 The days of working or running a business and saving your profit to build towards a more prominent company, other investments or retiring is a dream most of us will never realise. Under a completely fiat-based monetary system has made it harder to maintain your purchasing power. We’ve all accepted our currency would purchase us less the following year, and to compensate, we invest.

Investing can come in the form of bonds, stocks, real estate or commodities; anything that can offset the loss in purchasing power of currency has become a popular belief. We’ve seen the explosion in art, sneaker, wine and other hobbyist collecting becoming investable assets.

It is not that they are valuable per se; they retain value better than currency. However, the problem with all these investible assets is their supply can be increased. We can issue more shares, build more homes, mine more commodities, create more art or collectables.

All assets can increase their supply in some way, shape or form and can dilute the market.

In a world where all assets can increase their supply one way or another, Bitcoin takes the opposite approach and works on a finite supply of 21 million coins.

Why is Bitcoin supply limited?

When Satoshi Nakamoto designed Bitcoin, they added a strict limit on the number of Bitcoin that could ever exist. There will never be more than 21 million bitcoin—this limit, known as the hard cap. The 21 million coin limit is hardcoded in Bitcoin’s source code and enforced by nodes on the network.

Bitcoin’s hard cap is central to its value proposition, both as money and investment. Those who invest in Bitcoin accept that this rule will be enforced at all times and that their position in Bitcoin will never be debased by an increase in supply.

By limiting its maximum supply and slowing the rate at which new Bitcoin comes into existence, Satoshi intended each individual Bitcoin unit (known as a satoshi) to appreciate in value over time.

According to an email purportedly shared between Nakamoto and another of the Bitcoin Core contributor, Mike Hearn, Satoshi reasoned that if 21 million coins were to be used by some fraction of the world economy.

As Bitcoin has moved past the $10 000 and is threatening to reach $100 000, the satoshi increases in its purchasing power. As the satoshi becomes more useful for purchases, it also becomes a reliable unit of account.

When will the last Bitcoin be mined?

Once a miner mines block successfully, they receive 6.25 Bitcoin as of August 2021 — which is created every ten minutes. On average, the blocks constructed will keep ‘halving’ every four years, until eventually only 0.000000001 Bitcoin are awarded per block ‘mined’ by the year 2140.

When we factor in each halving and the current issuance rate, we can calculate that the last Bitcoin will be mined in the year 2140 — 119 years in the future — is further away than the expected life span of most people alive today.

What happens when all the Bitcoin has been mined?

The idea is once the last Bitcoin has been mined, the network will be so valuable that fees alone would be more than enough to encourage people to continue to provide hash rates to secure the network. The theory is the value of transaction fees will continue holding up its value of mining even though no new Bitcoin will be created.

What happens if more miners join the network?

As is the case with other commodities like gold, if the price of gold increases, it drives more miners into the market. In turn, it increases supply and reduces demand, driving down prices. In Bitcoin, the hard cap remains enforced regardless of how many miners come online.

The supply of newly mined Bitcoin is kept constant by its algorithm, even if the number of miners changes over time. Even if more miners support the network, changes the issuance based on the new hash rate supply known as the difficulty adjustment.

The difficulty adjustment keeps issuance the same over time, regardless of network support by miners.

The supply of newly mined Bitcoin is kept constant by its algorithm, even if the number of miners changes over time.

In addition, thanks to the BTC halving, bitcoin becomes more challenging to produce every four years. Eventually, even if you have sure miners who are capturing more of the share of new coins, it won’t be that way forever.

Each halving renders older operations less profitable, and new operations will be more efficient. This encourages the distribution of the coins and promotes the upgrading of network security all the time.

What is the importance of a fixed supply?

Having a fixed supply allows all economic actors in Bitcoin to calculate their business with a unit of account that doesn’t change. Miners can account for the amount of Bitcoin they have to earn to maintain operations. Investors can calculate measurements like interest rates based on the demand since the supply is inelastic.

A fixed monetary value allows for a measuring stick that cannot be changed. Therefore, it is easier to allocate capital to operations that produce profit in real terms, not nominal terms.

How does Bitcoin enforce its fixed supply?

Every Bitcoin user buys into Bitcoin with the security that they will not be diluted in the future. The idea is not a social contract, but it is enforced by code, code run by anyone who operates a full node. Full nodes check the Bitcoin network, and supported miners stick to the rules and implement the hard cap.

Any transactions or software trying to change Bitcoin without the consensus of the nodes will be rejected, thus enforcing the hard cap. If you think you can get 100 000 or more people to agree to have less share of the network than they already have, I wish you could luck.

Can this hard limit be changed?

In theory, the developers and node runners of Bitcoin could change how Bitcoin operates and increase the hard limit. The developers would create a new ruleset and need the majority of Bitcoin participants running nodes to agree. If all nodes, which are well over 100 000 already agree to run the new software, they could increase the amount of Bitcoin.

However, increasing the supply would decrease the value of the Bitcoin they hold, so why would they agree to such a change? Why would people want to devalue their position in favour of others?

Miners are the actors who may have the strongest motivation to change Bitcoin’s hard cap. Changing Bitcoin’s hard cap may temporarily increase revenue for miners. However, doing so would destroy a core investment thesis for Bitcoin—its scarcity. For many investors, the allure of Bitcoin is the predictable, fixed supply.

Removing the fundamental driver behind Bitcoin’s value proposition is not in miners’ best interest. Although the change would increase miner revenue in bitcoin terms, the loss of faith in the Bitcoin network would result in a catastrophic and irreversible price collapse, leading to a net loss of miner revenue in fiat terms.

Since almost all miners pay their costs—equipment costs, salaries, and energy bills—in fiat, they are more concerned with their fiat-denominated revenue than their bitcoin-denominated revenue. Thus, if Bitcoin’s price crashes, miners can go out of business, so they have an incentive to maintain a higher price.

Speculation that Bitcoin’s hard cap could change is rooted in two deeper misunderstandings about Bitcoin as a distributed, consensus-based network. Firstly, there is not one but dozens or hundreds of versions of the Bitcoin source code. Every node in the Bitcoin network runs independent software that will reject any invalid blocks.

Bitcoin nodes can run any compatible versions of the software, which are soft forks. However, any significant protocal changes like the hard cap would require a hard fork to be supported, which is not easily managed by the network.

Bitcoin actively tries to avoid trying to hard fork with any upgrade to ensure all nodes are backwards compatible and remain as decentralised as possible.

Miners do not control the network or its rules. Miners produce new blocks and validate transactions. Miners work for Bitocin; they provide the hash rate and select transactions that are placed in blocks. They deliver what is known as proof of work. Nodes, however, ensure that the code and Proof-of-Work are valid. Nodes will reject all blocks that violate these rules, meaning miners have no control over Bitcoin’s ruleset.

This theory has been validated by reality, when, in 2017, in the SegWit battle where 95% of miners agreed to raise the block size limit in an attempt to allow Bitcoin to scale. Nodes and users refused this change and successfully forced miners to adopt an alternative scaling solution.

This dispute led to the mainchain remaining the same and the birth of second-layer solutions like the lightning network.

Bitcoin’s 21 million supply cap is meant to control inflation that might, otherwise, result from an unlimited supply, as is the case in fiat. The limited supply allows those who live on a Bitocin standard to have security that the number of units they own will never be debased and will continue to remain deflationary.

The idea is that as more participants join the Bitcoin network and want to save and hold Bitcoin, the harder it will be to get others to part with the asset. The harder that becomes, the more value needs to be offered to acquire Bitcoin, driving deflation.

South African bitcoin pleb falling down the rabbit hole and willing to share every bump, scratch and knock along the way
View more articles from this author
PrevPreviousSquare Announce A Bitcoin Dex Whitepaper
NextDon’t Be Fooled By DEFI Interest RatesNext