How Does Bitcoin Inflation Work? 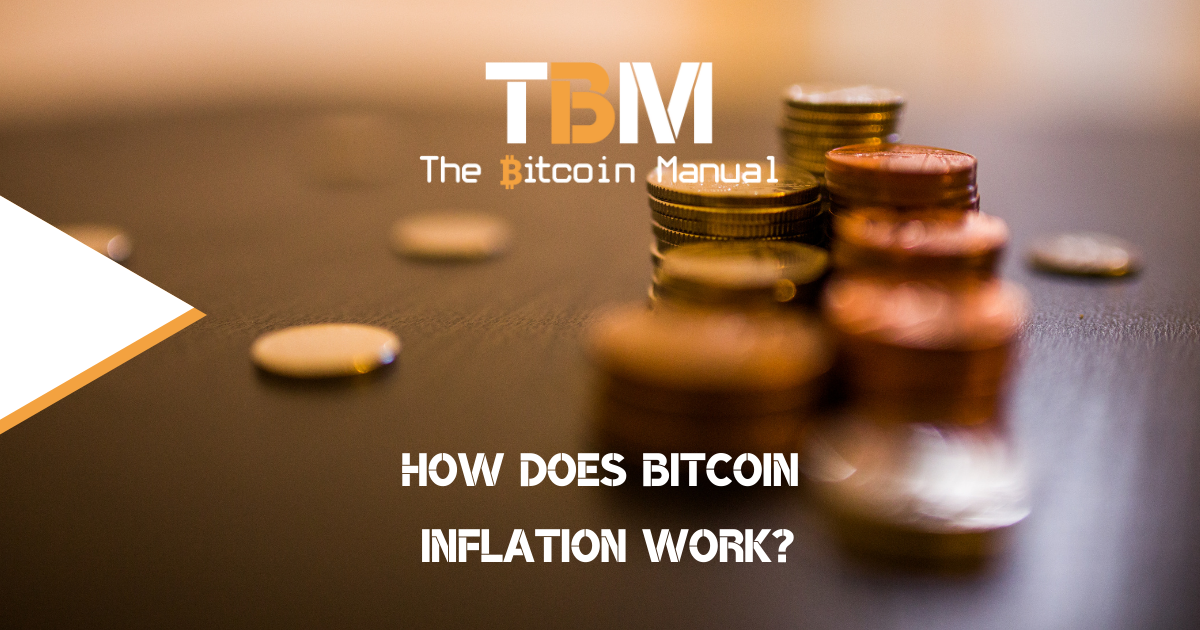 When you start spending time in the bitcoin space, you’ll often hear people talk about inflation. Most of the time, they’ll be referring to fiat inflation and how bitcoin helps protect against the devaluing of fiat currencies. However, bitcoin itself also has inflation, a concept that you may find confusing; how can something hedge against inflation but also have inflation?

Sounds strange, right? Having inflation is not necessarily a bad thing, despite the negative connotation we place on it due to our experiences under a fiat system. Inflation in the bitcoin market is necessary to bootstrap the network and attract individuals to participate in it.

Inflation is part of the bitcoin network’s reward system, and while bitcoin has inflation, it works differently to other monetary assets.

The issue with fiat inflation

Inflation is often defined as “an increase in prices of goods and services and fall in the purchasing
value of money. Due to increase in the supply of money versus the decreasing supply of goods that money plays claim to in an economy”

A simple example of inflation or rather consumer price inflation is if a six-pack of beers cost $8 last year, but this year the same six-pack costs $16, then the annual inflation rate was 100%. This is because the price doubled for the same quality and quantity of beer.

When a currency rapidly increases in supply, and in extreme cases devalues near-daily, this is known as hyperinflation. Some of the most he most famous examples of hyperinflations occurred in Zimbabwe and in
Germany.

The famous citing of hyperinflation was back in n 1923 during the German government’s hyperinflation caused the exchange rate to rocket to 4.2 trillion German Marks to one U.S. dollar.

While hyperinflation isn’t something many of us have experienced, constant inflation is something we all have to deal with each year. As inflation increases, the cost of living increases and the ability for your savings and wages to hold you over decreases.

Gold has inflation too

Prior to the invention of bitcoin, we had the gold standard or sound money standard which was considered the ultimate store of value because of one specific characteristic: Scarcity to produce.

No person or group can will gold into existence. Instead, the supply is controlled by nature and the cost of mining gold. As gold continues to be pulled out of the ground, found and added to the above-ground supply, the number of gold increases and this is an inflation in the supply.

Good stores of value are scarce

Although Bitcoin and gold are currently inflationary monies, according to the traditional definition of inflation, their inflation rates are predictable and constantly decreasing. It becomes harder to acquire as more supply comes into circulation. The difference between gold and bitcoin is that we know the annual inflation rate exactly, we know when it reduces, and we know it will eventually reach zero %.

What is the bitcoin inflation schedule?

During bitcoin’s current history and the three halvings, we’ve experienced the inflation rate has decreased consistently as follows.

What is bitcoins current inflation rate?

In 2022 more than 90% of Bitcoin (BTC) has already been mined and is in the circulating supply. However, its inflation rate continues to go down, currently sitting at 1.79% and is scheduled to be cut in half to less than 1% once the next halving comes into play.

95% of the supply is scheduled to be mined by March/April of 2026, and the entire amount – the maximum of 21 million bitcoins – by February 2140. As you can tell from the issuance rate, the longer it carries on, the fewer new bitcoin will be available for miner rewards, and of those rewards, even fewer bitcoin will make it into the open market to be traded for fiat.

How is the bitcoin inflation rate decided and protected

Bitcoin’s inflation rate was programmatically decided in the source code when the network was bootstrapped by its creator Satoshi Nakamoto and every user running a node runs a version of that source code that agrees on the issuance rate rules and the hard cap of 21 million.

Every node that runs a copy of the software has to remain in consensus with everyone else, or they will not be acknowledged by the network. Any node looking to broadcast changes to the network would need to get all nodes and miners to agree to the change to either the issuance rate or supply change.

A feat that is easier said than achieved, you would need to convince over 100 000 node operators and investors to devalue their assets and accept fewer claims on the networks’ value, and good luck trying to do that, the incentive is to maintain the current issuance rate and hard cap as everyone who partakes in the bitcoin network agrees that this is the best means to maintain purchasing power and attract more value and participants to leverage it in the future.

As economies around the world continue to take a hit due to lockdowns, supply chain issues and disruptions through certain geopolitical events, we’re going to see governments continue to increase their obligations and live above their means. Putting additional pressure on fiat currencies around the world to continue to devalue, the more currency debasement increases compared to bitcoins algorithmic and predictable rate, the softer fiat becomes against bitcoin.

These forces may class in the short term, and we may see bouts of deflation in fiat or sell-offs in bitcoin, but these are only temporary. The overall trajectory for the value accrual is undeniably in bitcoins’ favour as people look to store their wealth in something more reliable.

Hard money is severally lacking in the world today, with precious metals well and truly captured with a massive derivative market living on top of it, and self custody only a fractional part of its overall supply.

In bitcoin, we have an asset that costs very little to self custody which means we have a natural way to fight against rehypothecation and the growing influence of the paper bitcoin market. The threat of a bitcoin bank run will always be a constant risk to traders and custodians, versus the physical custody of precious metals.

Combine that with bitcoins open accounting system; we always have pressures that will expose leverage in the system if it gets too large.

So ask yourself, do you want to store your wealth in an asset like fiat, which is guaranteed to debase over time, so you’re punished for holding it and have no assurances of the speed at which its units expand. In a system like this, the product of your labour is constantly getting discounted, and you’re forced to chase more fiat or compensate with either more hours of your labour or taking more risk in various asset classes, becoming an active investor and having to earn your money twice.

Or do you side with bitcoin, where you have complete transparency of the supply. You can verify it yourself by running a node, and you have assurances on its inflation rate and its tightening of the inflation rate over time.

In a system like this, your labour and the ability to remain frugal and financially savvy continue to reward you and reduce uncertainty. The more you stack and the longer you hold it, the harder you make it for others to acquire and forcing the repricing of bitcoin as the rest of the market competes for the ever-dwindling remaining float of bitcoin.

Get cracking with your stacking

Have you started to move over to bitcoin? How has it worked out for your savings? Let us know in the comments below; we’re always keen to hear from fellow stackers.

South African bitcoin pleb falling down the rabbit hole and willing to share every bump, scratch and knock along the way
View more articles from this author
PrevPreviousWhat Is A Private Channel On The Lightning Network?
NextWhat Is Time Preference?Next