What Is Time Preference?

Home » Articles » What Is Time Preference? 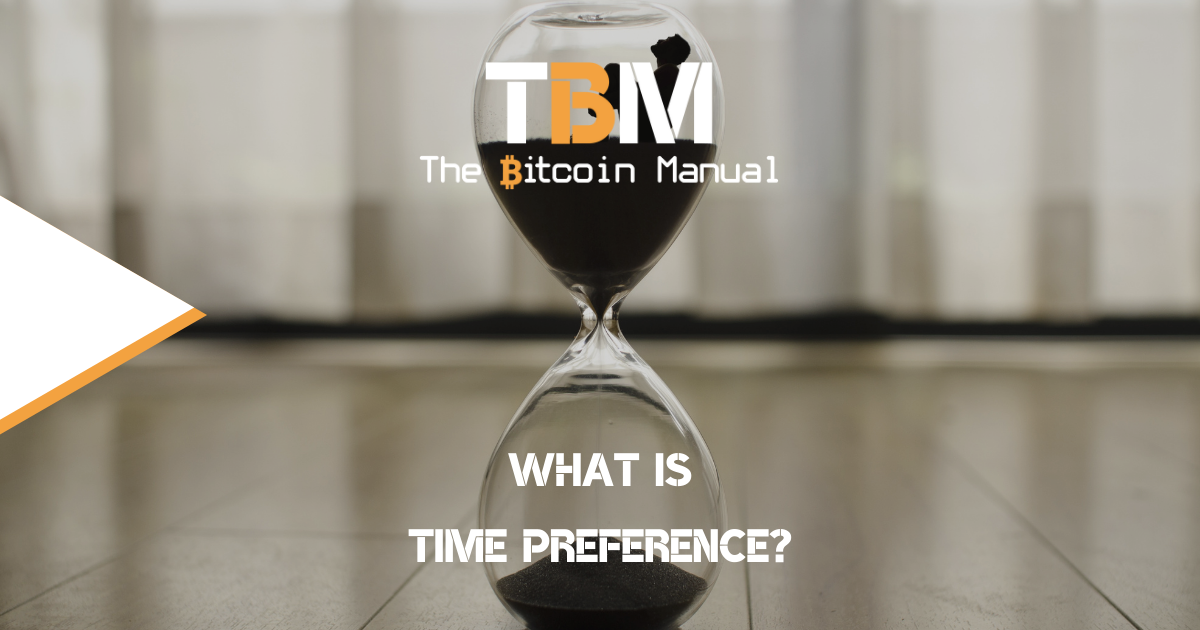 When it comes to deep thought exercises, the concept of time is one that always strikes a chord with me. Ever since I had that “eureka” moment from beginning to understand how Bitcoin works compared to fiat, I started assessing my own “time preference”, particularly over the last 4 years.

With the pandemic forcing lockdowns across the world, it generally made people consider more seriously how they are spending their time and change their approach to life.

Personally, having sunk to a real low point after three years in a demeaning and soul destroying customer service job I too decided to wake up.

Working a job you don’t like that pays you in a type of money that loses purchasing power due to inflation doesn’t add up!

Many will have experienced that feeling too with the so-called “Great Resignation” during the peak of the lockdowns. Although I prefer the term “repurposing” as I believe it ties in nicely to the concept of time preference and the theme of this blog.

The Difference Between High or Low Time Preference

“Time preference” is a phrase, traditionally used in finance, that refers to how much emphasis someone puts on enjoying something closer to the present or further in to the future.

In other words, can the gratification of having the “thing” be delayed if you don’t need it right away?

It can also apply to other aspects of life such as your career, building a business, fitness and exercise goals, food, buying next day delivery or waiting longer and so on.

Having said all that, the principle of time preference isn’t binary but rather it’s more like a spectrum that we oscillate on at various points throughout our lives, depending on our situation and mindset at the time.

Going back to my initial career ramblings earlier, if I had a high time preference with my customer service job, I’d have handed my notice in 18 months ago to get the instant gratification that I’d be out of that sh*t and would deal with the rest later.

However, I have already had experience of doing this exact move previously but with no other job to go in to and, despite getting that instant gratification of leaving a sh*thole, it hit hard financially.

So with a low time preference mindset, I had to dig as deep as I could to just grin and bear it there. At least I could use the money I earned from fiat mining to save in Bitcoin.

This meant that having patience and staying disciplined were of paramount importance, especially as the whole process took 18 months from being at my lowest point to starting a new career.

Low time preference isn’t easy, especially with the way the world is constantly spurring us on to consume everything in sight and buy things immediately with credit to pay back later. It’s like the world wants you to have a high time preference and that it’s socially acceptable to be this way.

The question to ask is…

“When Do You Really Need It?”

That’s not to say there’s anything wrong with a high time preference as if you are in a situation where your immediate survival is in question, then that’s obviously the highest of priorities.

However, if you’re not in a situation where your immediate survival is under question then do you really need it right now?

How you spend your money is up to you of course, I’m not going to tell you otherwise. The aim, I guess, was to just get you to think about when you really need something and how low and high time preference behaviours work from my experience.

Looping it back around to Bitcoin, I’ve found that setting a goal to achieve in a certain time frame has helped me seriously consider what I spend my money on. Trying to cut as many non-essential items out, looking after what I have now so I don’t have to keep buying things at the sacrifice of sats and so on.

As we know, the fiat system erodes purchasing power as it is a terrible store of value and punishes those trying to save our hard earned money from the day job. So spending it before it inevitably becomes worthless “makes sense”.

However, at least now, there is an option to opt out of this with Bitcoin’s monetary system and know that the sats we stack aren’t going to be diluted with random changes to its inflation schedule.

Che alluded to a similar concept in a previous blog where he spends in fiat and saves in Bitcoin – it’s the best of both worlds but only you know how much you can save.

A good start point is to, at the very least, assess your income and outgoings and work it out from there. Your future self will thank you years down the line, I know mine did.

British bitcoin pleb falling down the rabbit hole and willing to share every bump, scratch and knock along the way
View more articles from this author
PrevPreviousHow Does Bitcoin Inflation Work?
NextHow Bitcoin Mining Can Stop South African Load-sheddingNext