Does Bitcoin Have Inflation?

Home » Articles » Does Bitcoin Have Inflation? 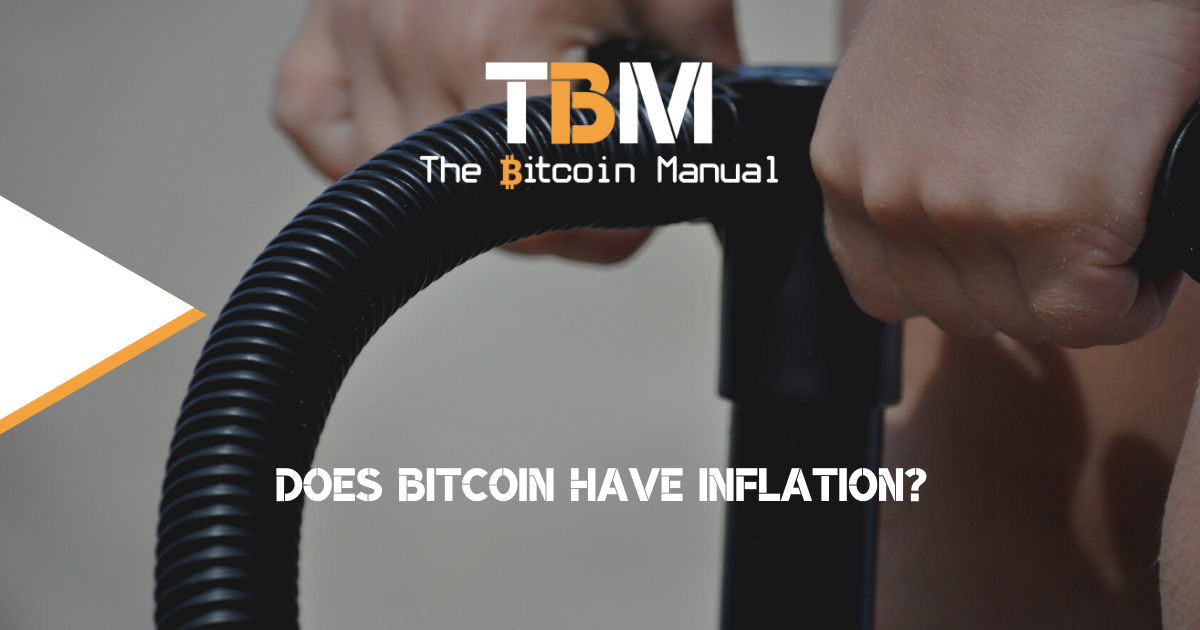 All this talk of inflation and deflation around Bitcoin can become confusing; I know I am still trying to wrap my head around it all. I am no economist or expert, and I’m trying to put the pieces together in a way that’s easy to understand.

What I’ve noticed is that inflation and deflation are two forces constantly pushing at one another. Currency value, asset supply and value, commodities, consumers are always in a state of flux.

As markets respond to different supply and demand forces, repricing occurs, and with that repricing, it represents inflation or deflation.

A simple way to look at these two forces are:

The problem with inflation is it is a general term, and it can apply to a host of different markets. For the average person, however, Inflation is commonly defined as “a general increase in prices and fall in the purchasing value of money.” In this instance, we will refer to monetary inflation since we’re referring to the monetary value held in a currency.

An example of monetary inflation can be seen in consumer price inflation. If a six-pack of beers cost $8 last year, but this year the same six-pack costs $16, even though the product hasn’t changed in terms of effort to produce, then the annual inflation rate was 100%.

This is because the price doubled for the same quality and quantity of beer. Sure, goods and services can increase due to supply constraints, but if all things remain equal. However, prices continue to rise, or if we find more efficient ways of conducting work and prices still rise, it is primarily down to monetary inflation.

The increase in currency units offset the profits from improved services or production and continue to drive up pricing as the currency loses value as more of it is created. As citizens, we’ve accepted yearly inflation as the norm when it is anything, but it is theft on a global level.

However, we chalk it up to the cost of doing business and only see inflation as bad once it hits catastrophic levels, known as hyperinflation.

The most famous hyperinflations in recent years occurred in Venezuela, Zimbabwe and Germany. In 2016, the country experienced 274% inflation, and by 2018, it had hit 130,060%

In 2003, Zimbabwe’s monthly inflation rate hit 7.96 x 1010%, and in 1923 the German government’s hyperinflation caused the exchange rate to rocket to 4.2 trillion German Marks to one U.S. dollar.

These may sound like isolated incidents, but there are several countries that are edging closer to seeing this as their reality in the next decade, Lebanon is the closest in recent years.

If the amount of currency in circulation increases and does so faster than that of assets, goods, services and commodities. You would see the additional currency units filter into the economy and bid up prices.

This would result in:

Where those newly created currency units are “saved” by putting it into assets that retain value, such as stocks, bonds and real estate.

Where those newly created currency units are used for consumption, be in business or a personal capacity. The more currency units chase goods and services, the more it pushes up prices as it becomes harder to meet demand.

Where newly created currency units are used to secure certain raw materials but outpace new supplies coming onto the market. If the new currency units aren’t used to effectively generate a new supply of a commodity like oil or gold, that means it’s going to cost more to create or extract. Therefore, pricing for those commodities increases to reduce pressure on the avialable supply.

As you can tell from the examples above, it all depends on where the new currency units find themselves a home. Depending on how the new money is injected into the economy. It can affect different industries and drive a different type of inflation.

Does Bitcoin have inflation?

Yes, Bitcoin has inflation, but it has programmatic inflation. The amount of coins issued per block is hardcoded into the protocal run by all Bitcoin nodes, and each 4-year cycle, the issuance is cut in half.

We know that the moment 6.25 BTC is released every 10 minutes, which puts its inflation rate at 1.85% per year.

So Bitcoin has an inflation schedule that sees the circulating supply increase, but the supply gets smaller and harder to produce each year.

The harder it takes to produce Bitcoin, the more scarce it becomes relative to expanding energy to create other goods and services. As the supply of other monetary assets and commodities increase relative to Bitcoin, Bitcoin’s purchasing power increases, which is what is referred to as deflation.

Deflation is the opposing force of inflation and can be defined as the fall in the overall level of prices in an economy and an increase in the purchasing power of the currency. It can be driven by an increase in productivity and the abundance of goods and services, by a decrease in total or aggregate demand, or by a reduction in the supply of money and credit.

Bitcoin’s has inflation but leverages deflation.

Although Bitcoin and gold are currently inflationary monies, according to the traditional definition of inflation, their inflation rates are predictable and constantly decreasing. Gold has presently an annual inflation rate of around 2% per year, while Bitcoin’s inflation rate sits at about 1.85%

Similar to gold, Bitcoin’s annual inflation rate should, in theory, trend towards zero %.

However, the difference with Bitcoin is it’s provably scarce; we know there will only be 21 million Bitcoin, gold we do not know how much supply remains underground.

Gold issuance can also fluctuate based on mining operations efficiency, where Bitcoin has its “difficulty adjustment” every two weeks to keep the issuance rate predictable.

So we can say without a doubt that Bitcoin has inflation as the amount of Bitcoin supply increases each year.

Why is Bitcoin deflationary?

However, According to the mainstream economic definition of inflation, Bitcoin is deflationary because the purchasing power of Bitcoin increases over time.

Currently, Bitcoin’s purchasing power is exceptionally volatile when tracking it on shorter time frames as it is constantly repriced by the market. We have seen consistent growth over the last decade and, there is an expectation it will stabilise in the long run as the asset class manages a larger pool of capital and has greater distribution.

Since Bitcoin’s total supply is fixed, Bitcoin’s purchasing power will continue to grow slowly over time if demand continues to increase. This increase is also reliant on our ability to use our resources more effectively and create larger supplies of other goods, services, and commodities.

The greater the supply of goods and services, when compared to Bitcoin, will see its deflationary properties allow you to claim more of that productivity.

Having more claims on property, commodities, assets and consumption items will see you benefit from Bitcoin, the assets deflationary properties.

South African bitcoin pleb falling down the rabbit hole and willing to share every bump, scratch and knock along the way
View more articles from this author
PrevPreviousWhat Is A Bitcoin Smart Contract?
NextSquare Announce A Bitcoin Dex WhitepaperNext