What Is A Private Channel On The Lightning Network?

Home » Articles » What Is A Private Channel On The Lightning Network? 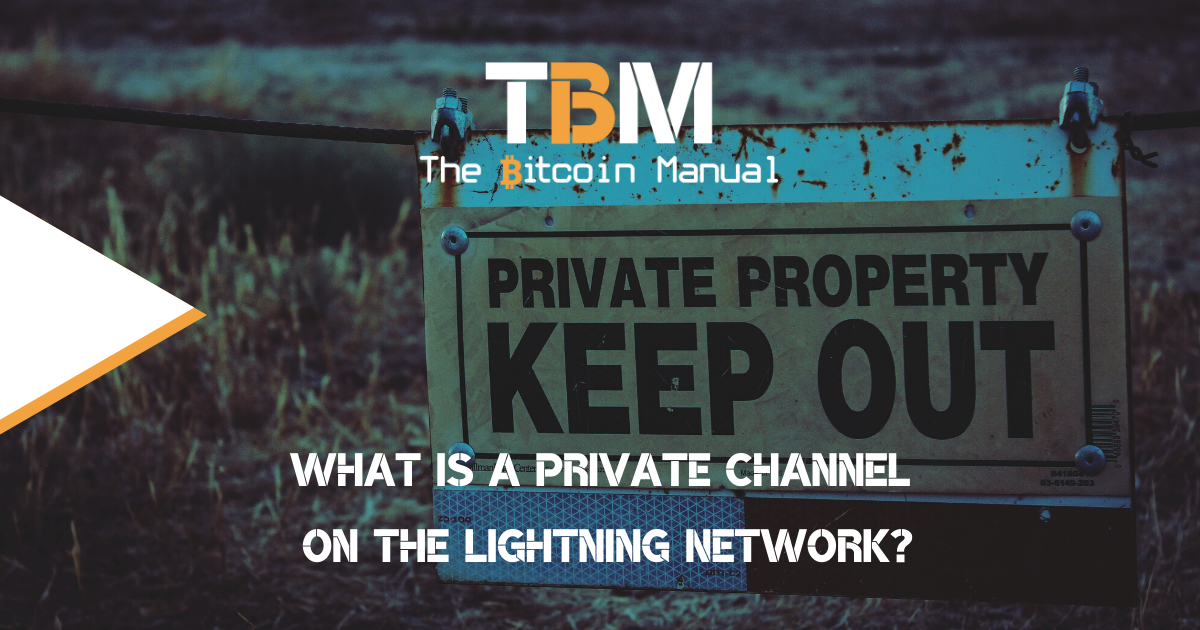 The Lightning Network is a second-layer solution that lives on top of the bitcoin network, which allows users to take their bitcoin and move it into a new system where different rules apply. Instead of being constrained by the bitcoin blockchains process of adding new transactions to a mempool and waiting for miners to organise transactions into blocks, the lightning network lets you set up direct connections with users you would like to pay or use different routes to pay users.

These connections are referred to as payment channels; these payment channels are made up of bitcoin base layer UXTOs that are locked into the lightning network via a contract known as an HTLC.

As a lightning network user, you’re encouraged to create channels because the more routes we create between different users, the easier it is for satoshis to find a path between users.

Anatomy of a Lightning channel

Lightning channels enable users on the Lightning Network to send and receive money to and from other users. These money highways are hooked up to each other, allowing payments to flow between users seamlessly.

All Lightning channels are between two nodes on the Lightning Network; you could be establishing channels via your own lightning node, a cloud node, or a custodial node.

Every channel you establish would work just the same in terms of flowing payments, but you running your own node will provide you with more privacy and granular control over your Lighting Network experience.

How are lightning channels created?

Users can open a Lightning channel by broadcasting a bitcoin transaction that’s designed to lock their funds on the Bitcoin blockchain and unlock them on the Lighting Network. This ensures that money cannot be spent in multiple places simultaneously, so there is no need to worry about double spending on Lightning.

When a Lighting channel is created, the creator must choose how much money they want to have available in that channel. As an example, you could broadcast 0.001 BTC to the bitcoin blockchain that will give you 100,000 satoshis on the Lighting Network.

How are Lightning channels used?

Once a Lightning channel is established, its owners can send and receive money through them. If you want to send 1000 satoshis to a friend, they’ll need a Lightning invoice, LN-URL, or Lightning Email Address. You can use any of these methods to request a path to pay. If you confirm the payment and have a direct channel, the payment will only move between the two of you.

If you don’t have a direct channel, you need to leverage the network, which is all done on your behalf; you need not do anything. The network will look for the quickest route and hop between other users until it reaches the final destination.

Depending on the payment size and the number of hops, it will add negligible fees to that transaction, sometimes in the form of a few sats or even milli-sats.

The vast majority of payment channels remain public channels as there is an incentive to provide open liquidity on the network, if you plan to expand the network’s paths, and earn routing fees in the process. However, it’s not the only method of creating a channel.

What is a private lightning channel?

Once a channel is private can’t be used to route, as other nodes can’t “see” them. Therefore private channels won’t be recognised when pathing a transaction.

When you remain a private channel node, the lightning network explorers and visualisers cannot secure data on those Lightning Nodes. There is a limit to the private channels, as even if you did everything right and never opened a public channel, there is still a chance of being discovered.

All it takes is one of your channel partners revealing your private channel and public key via an invoice, and your data will be released to the world. All of this being said, and even with the improvement in data mining of the lightning network, we will never truly know the extent of the lightning network, and as it keeps growing, the private side of the network will grow too.

Be your own payment provider

No need for Neobanks, Virtual credit cards, or Point of sale systems that are run by centralised companies. You can take back the entire process through the lightning network and the way you establish a network of channels.

The lighting network tool kit is only expanding and can be as complex or as simple as you need it to be, leaving no excuse for people not to get involved.

Creating channels that suit you

Have you started creating lightning channels? What are you using them for? What has been the best or worst part of channel management for you? Let us know in the comments down below, we’d love to hear from you

South African bitcoin pleb falling down the rabbit hole and willing to share every bump, scratch and knock along the way
View more articles from this author
PrevPreviousWhat Is The Wyckoff Method?
NextHow Does Bitcoin Inflation Work?Next