Home » Articles » What Are The Biggest Publicly Known Bitcoin Losses? 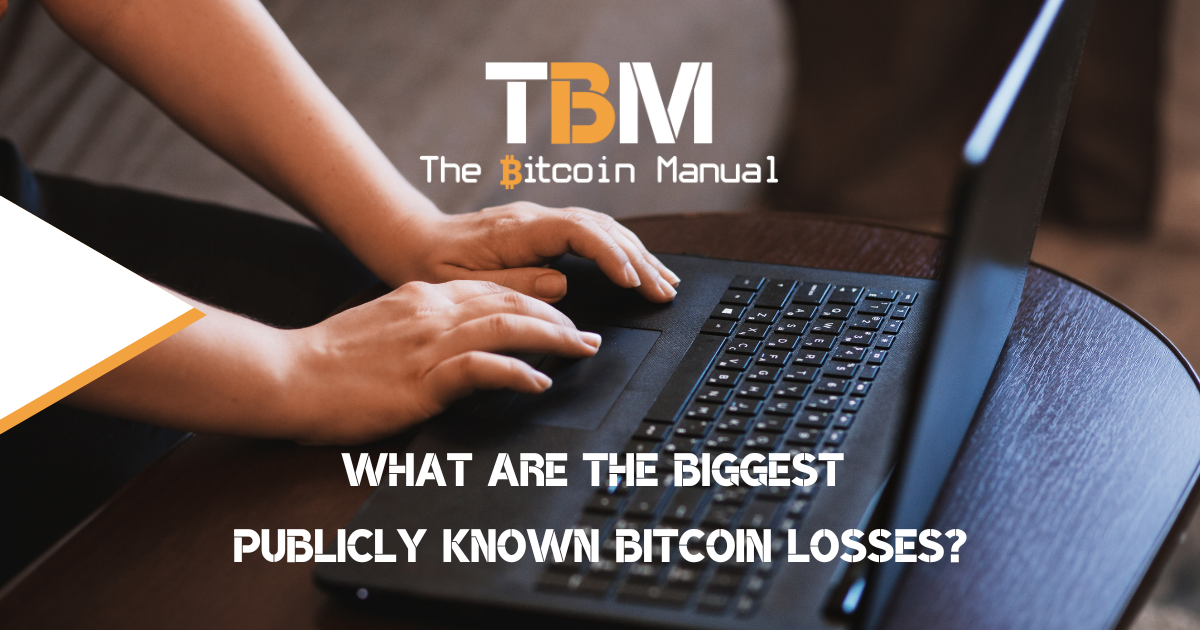 The news of FTX’s dramatic rise and fall has so many moving parts, but its balance sheet has to be the be-all and end-all, the only source of truth we can look to once all the dust settles. It tells the story of the misappropriation of customer funds and the result of focusing on financial engineering instead of building a business.

As the assets and liabilities of FTX are now under the spotlight, reports have surfaced that FTX, the second biggest exchange in the world, had 0 bitcoin on their balance sheet despite having over 100 000 BTC in IOU’s to their customers. As it stands now, customers who purchased bitcoin on FTX never had any bitcoin backing those claims, and customers who deposited bitcoin never had bitcoin backing those deposits.

Usually, when exchanges go bust, there is still some semblance of bitcoin on their balance sheet that could be divided up post-bankruptcy proceedings. Still, in this case, there is no bitcoin, only illiquid altcoins that could never be liquidated without sending most of them to zero.

So the chance any of FTX customers getting any bitcoin back for the bitcoin they saw represented on the screen in their account is pretty much zero. It’s a tough pill to swallow, and due to the size of this failure, it will be one of the largest in bitcoin history, but not the largest.

So if you’re feeling a little down because you lost some bitcoin in this latest round of deleveraging, let’s take a walk down memory lane and look at some other popular examples of bitcoin cold cases.

According to Jameson Lopp over at Casa, a bitcoin self custody provider, over 1 million BTC has been lost over the years due to exchanges blowing up or getting hacked. If we consider that of the current total supply of 19 million BTC, 5% of it has been reported in lost bitcoin; from some of the losses we know about, how many do we not know of, and how large are they?

Another issue to consider is how many of the current claims of bitcoin have bitcoin backing them and what ratio of unbacked IOUs are floating around out there, which will end up hurting more investors in the future.

If you’re still holding your funds on an exchange because you’re afraid of self-custody or falling into the dangerous trap of survivorship bias, let me remind you of some other famous exchanges departing from their bitcoin.

If there is one scandal in bitcoin’s history that draws FTX by absolute bitcoin loss, it has to be Mt Gox. Credited with being one of the world’s first major bitcoin exchanges and accounting for up to 80% of trading volume during its peak – Mt Gox first launched in the summer of 2010 and suspended operations only four years later in February 2014.

The victim of Mt. Gox lost a combined 650,000 bitcoins. Although 200,000 bitcoin were eventually recovered, but have yet to be redistributed back to customers.

QuadrigaCX might not have lost a massive amount of bitcoin, but it does have an uber-compelling story to tell, so it has to get a mention. Gerald Cotten was a Canadian who co-founded the centralised exchange, QuadrigaCX. Starting out as a legitimate exchange, things began to derail, and by 2016, Gerald had turned Quadriga into a one-man operation, firing all the staff. Between 2013 and 2016, Gerald paved the way for creating his personal money printer and was creating tokens within the Quadriga ecosystem at will.

The OSC would later discover that 95% of activity on Quadriga, was conducted by Gerald himself using a false identity. In 2018 Gerald married his longtime girlfriend, drafted a will, leaving all of his gains to his wife, and was declared dead by Indian medical authorities in December of 2018. His death is a topic of suspicion, and it is believed by some that he may have faked his death.

In August 2016, the centralised exchange Bitfinex cryptocurrency was hacked, and 119,756 bitcoin were moved from their possession. In a bizarre turn of events in 2022, two individuals Ilya Lichtenstein and his wife, Heather Morgan, were arrested in Manhattan for an alleged conspiracy to launder bitcoin stolen during the 2016 hack of Bitfinex.

According to reports, 94,000 bitcoin were recovered, and it’s anyone guess where the other 25 000 bitcoin ended up.

Exchanges are a popular way for many to lose their bitcoin, but it isn’t the only way to say sayonara to your satoshis. Through plenty of horror stories over the years, we’ve learned the importance of proper key management, wallet software and hardware have drastically made it much easier to custody your bitcoin, but that doesn’t mean it’s going to guard against mistakes and negligence.

You still have to show up every day, make sure your keys are legible and make sure you know where your stored copies are and that they are stored in a method that isn’t easily lost, tampered with, accessed or destroyed.

If you don’t, you WILL lose your bitcoin, as many have in the past.

Don’t believe me, well, consider some of the most famous cases of lost bitcoin due to poor key management.

Stephan Thomas and the lost keys

The tale of Stefan Thomas made many headlines when the story of the San Francisco-based software developer holding 7002 bitcoin couldn’t find his keys. Stefan got into bitcoin very early, around 2011 and acquired a sizable amount of bitcoins which he kept on an IronKey USB stick, so he did the right thing safely storing his bitcoin.

But the kicker is he cannot remember the password to the device, and without the password, he had a total of ten password attempts to open the key. Stefan attempted eight times to crack into his USB storage, giving password guessers just two attempts to crack the code, but now has to make peace with the fact that those funds are gone for good.

The story Stefan Thomas is often recited in bitcoin circles as a warning to how easily fortunes can be won and lost in bitcoin. The UK resident, Howells lost his Bitcoin fortune of 7,500 BTC when he accidentally threw away an old laptop, mistaken for an obsolete one in 2013.

The attempt to search for the wallet could cost millions on its own, with no guarantee that the laptop could be found or even that the keys could be extracted. James made an additional offer to the council after he had received offers from hedge funds offering to help finance the search, looking for a slice of the reward pie, but with no luck.

Gabriel Abed, an entrepreneur from Barbados, lost around 800 Bitcoin, according to the New York times. The bitcoin access codes were destroyed when a colleague reformatted a laptop containing private keys to a wallet in 2011. Sure it might not have been that much in relative purchasing power back in 2011. Still, as each year goes by and bitcoin continues to appreciate, that simple act of not physically backing up keys becomes an even costlier mistake.

Yes, you can lose your bitcoin

Despite these examples, I am confident that we still have many more stories of lost fortunes to come. The concept of digital scarcity and digital ownership still needs to sink in or rather sync into people’s brains. Until then, investors will disregard the security aspect of bitcoin and use it or hold it in a risk-on fashion.

I think you have your answer, now go ahead and spin up a wallet.