How Bitcoin Can Be Lost?

Home » Articles » How Bitcoin Can Be Lost? 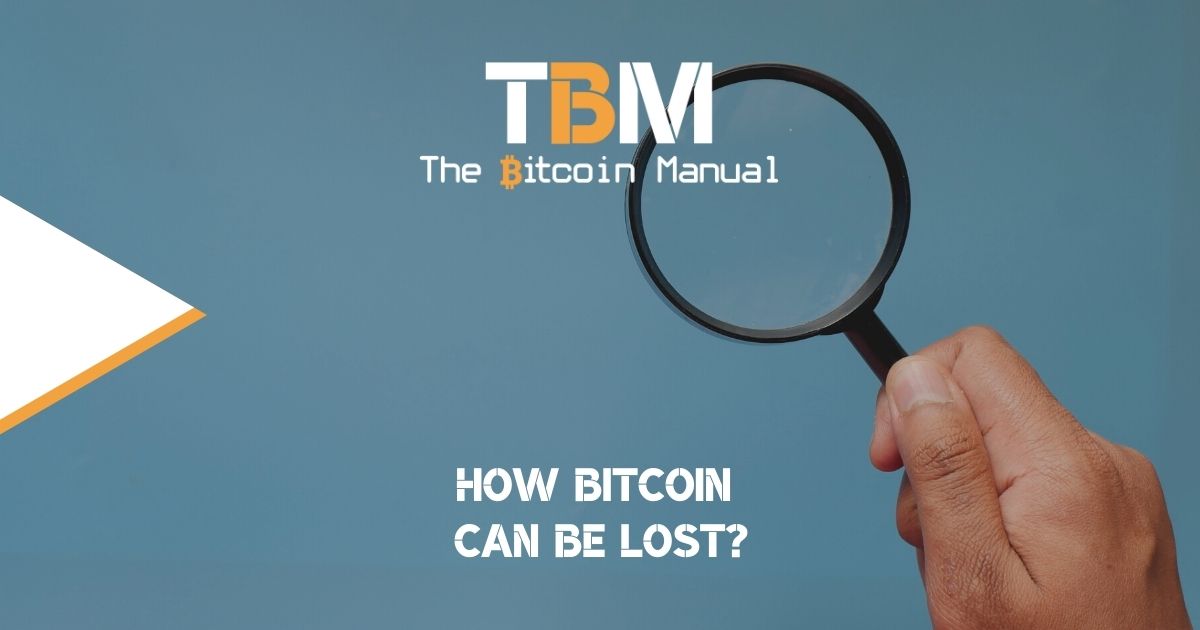 Bitcoin is still very much a path less travelled for most people. When you venture into a space that requires self-discovery and personal responsibility, mistakes will be made as part of the learning experience.

Some of these mistakes will be painful and prove to be costly. I think the idea of digital value still needs to take hold in people’s minds and act accordingly.

As Bitcoin’s value continues to rise in purchasing power terms, we are seeing a trend towards better Bitcoin management. Additionally, with money flowing into the space, better solutions are created. Companies and software developers in the Bitcoin space are Lazer focused on making interacting with the blockchain more accessible.

As the complexity is reduced, far fewer people will be liable to make mistakes, but it doesn’t mean you can sit back and relax. Since Bitcoin is a final settlement layer, once you broadcast a transaction to the chain.

It can never be reversed.

How do people lose their Bitcoin?

Every year, millions of satoshis worth of bitcoin are lost, and the trend will continue. In most circumstances, these coins cannot be retrieved and permanently exit the bitcoin circulating supply. More often than not, lost coins can be traced back to user error, so let’s look at how to avoid costly mistakes and what it all means.

Bitcoin has been around for over a decade now. During that time, technology has changed a lot, and the average person probably isn’t still cranking up Windows Vista or using the command line to manage Bitcoin.

In the earlier days, people did not take Bitcoin seriously due to its relative value at the time. In several cases, people will lose their laptop or throw it away, forgetting that they have Bitcoin stored on it.

Due to poor backing up of recovery passwords, broken devices and fried motherboards also lead to losses.

In one well-known case, an IT worker named James Howells threw away a hard drive that contained 7500 Bitcoin he’d mined at virtually no cost in the early days, which would be an absolute fortune today.

Yep, it is possible to buy or mine Bitcoin then forget you own it. This sounds like a caviar-and-champagne problem, but there is no one that will remind you of your Bitcoin. There is no Bitcoin bank or Bitcoin app that manages your finds, sending you updates to your email or phone.

You are completely in charge, and as life happens, you’ll be surprised at how many people just forgot about it their Bitcoin and never bothered to set up any recovery processes.

In addition, death can also be a cause of lost coins. It’s now recommended that those who do have Bitcoin should consider estate plans and add details to a will to help their family access it if necessary.

Sending to a wrong address

Sending Bitcoin to an incorrect address is like mailing your money to an unknown location, and you’re not sure if it exists or not or if people have access to that location. Once confirmed on the chain, it’s impossible for anyone to open the door and retrieve it. This can happen if you mistype an address, and transactions cannot be reversed.

Your private key gives access to your Bitcoin. If you lose this, it’s like forgetting the code for an unbreakable safe. Some people have written down their credentials incorrectly, only to lose their access or accidentally throw away the piece of paper. Others committed them to memory, then later forgot it.

In addition, people may destroy their private keys on purpose for various reasons, perhaps to avoid giving them over to family, governments or thieves.

The creator of Bitcoin, Satoshi Nakamoto, is believed to have mined one million but has never touched them. Some believe Nakamoto destroyed the private key.

Individuals aren’t the only ones who make mistakes with Bitcoin.

Zombie coins are those with addresses that have not had any outgoing transactions for years yet could theoretically still be accessed. One such address is associated with the infamous Mt. Gox hack. This address has been holding 79,957 bitcoin since 2011, and no one knows for sure if those coins will ever re-enter circulation.

Another high profile case is the one of Quadriga CX, an exchange in Canada lost access to Bitcoin when the 30-year-old founder of a Canadian cryptocurrency exchange died suddenly. It was reported that he was the only one with access to the keys, and therefore the coins could not be recovered.

What to do if you’ve lost coins

If you happen to find yourself in a situation where you have lost access to your bitcoin, your best course of action depends on the cause. In most cases, your Bitcoin will be irrecoverable and be lost forever. So it’s important to ensure you NEVER reach the point of no return.

Always ensure your safety and security measures are up to scratch and do regular checkups to ensure nothing is a miss. You can’t afford to slip up when it comes to managing your money through self custody.

If you don’t have direct contact, there is a complete shot in the dark option that may be worth trying if you have no other options.

You could leverage the OP_RETURN feature to send a message to the address explaining the mistake. Understand that this method will make any sent coins unspendable, so make sure only to pay the necessary fee.

Your Bitcoin was stolen.

If your bitcoin was stored on a hot wallet or a breached cryptocurrency exchange, your next course of action is probably a legal route. Legal action will depend on law enforcement and regulation in your country, so it’s not a one-size-fits-all solution.

The truth is there are very few paths for pursuing stolen bitcoin, but it is best to alert the community with details of the transaction.

I’ve personally been down this rabbit hole, and I can tell you there is very little chance of resolving this issue. The best option is always to hold your Bitcoin in a cold storage device and maintain a secure place for your keys.

Your transaction is stuck.

If your bitcoin is stuck because you’ve set the wrong fee for a transaction, you can leverage a method known as Replace-by-fee (RBF) to encourage miners to grab your transaction from the mempool. Depending on your wallet, it may natively support this feature. Doing so allows you to replace the stalled transaction with an identical one that offers a higher fee and is more likely to be confirmed.

You’ve lost or damaged your hardware wallet or digital backup.

If you were using a cold storage wallet and have lost access to it, you have a few options. If the hardware has failed or become damaged and you do not have a backup, you may have some luck letting a reputable data recovery team have a crack at it.

If you still have access to the private keys, you can regain your wallet by inputting your recovery seed into a new wallet.

Coin loss is a certainty, but don’t let it happen to you.

We humans aren’t infallible, and we’re bound to make mistakes, which is why it’s important to have as many fail-safes as possible when it comes to managing your Bitcoin. There are only a finite amount of Bitcoin, and while 21 million may be the full amount, it will be far less as users continue to lose their coins.

Removing more coins from circulation means it drives up the scarcity of the asset and increases the relative purchasing power of each unit that can return to the options market.

I know this may not be comforting for those of you who have lost your Bitcoin, but let it be a reminder to everyone on why Bitcoin security is so important.

South African bitcoin pleb falling down the rabbit hole and willing to share every bump, scratch and knock along the way
View more articles from this author
PrevPreviousEarly Bitcoin Wealth Will Be Wasted
NextHow To Verify A Bitcoin Transaction?Next