How To Verify A Bitcoin Transaction?

Home » Articles » How To Verify A Bitcoin Transaction? 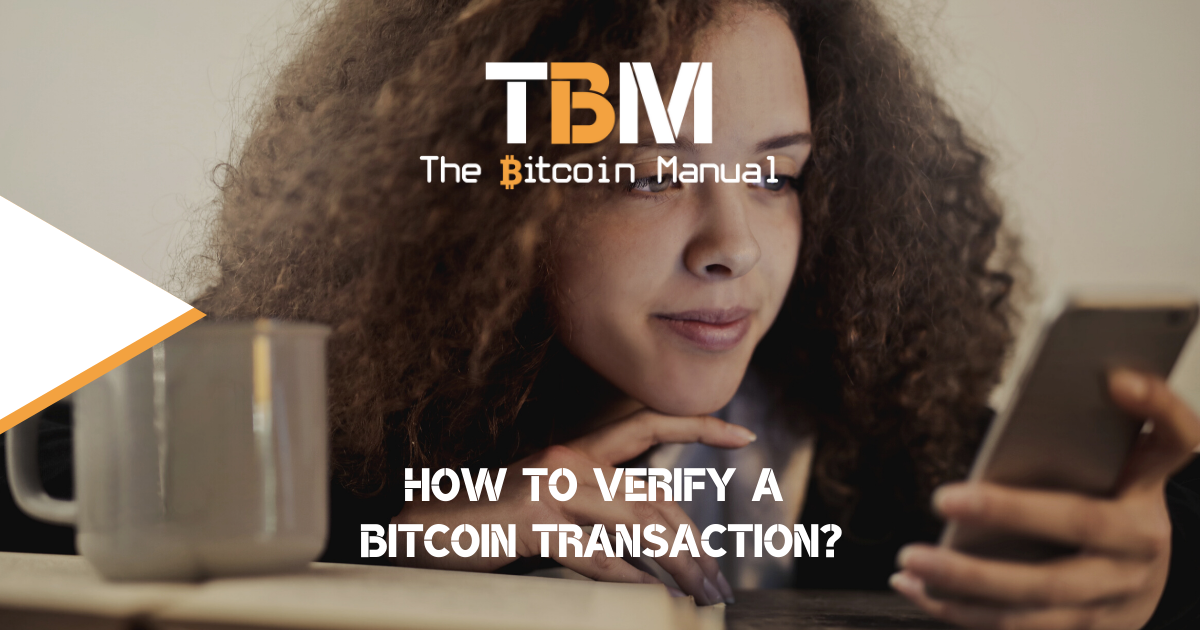 Moving into a decentralised world where you are the bank, and you have to take responsibility for managing your money can be daunting. I think for every new Bitcoiner, sending that first transaction on the blockchain will have you sweating bullets.

You’re wondering if you did it right, did you copy the address correctly, is it normal to take this long, how do I follow up with my transaction. It’s a scary but also a liberating process that you should never take for granted.

The feeling you have when you send your first on-chain transaction, I say, remember it and harness it. Never get complacent when moving your Bitcoin; check, double-check and re-check everything you do because once it hits the chain, there’s no going back.

Bitcoin’s electronic value exchange system will seem like alien technology when you first use it. Whether you are spending or accepting bitcoin as payment, it is prudent to understand how a transaction works. It will save you a lot of stress and help get you comfortable with performing transactions.

What is a Bitcoin transaction?

Bitcoin transactions are digital messages, like email, which are digitally signed using cryptography and broadcast to the entire Bitcoin network for verification. Transaction information is publicly available on the digital ledger known as the Bitcoin ‘blockchain.’ The history of every Bitcoin transaction leads to the point where the bitcoins were first mined into exitance.

If you own Bitcoin and you’re looking to either spend it, send it to your Bitcoin wallet or convert it to a different exchange, you’ll first need to know a transaction is verified on the blockchain. A chain exists as a way to achieve final settlement and the digital distributed ledger that contains every single Bitcoin transaction ever made. The chain makes Bitcoin secure and trustworthy, as they make every transaction is immutable and can never be changed.

What does Bitcoin transaction confirmation do?

When you commit a Bitcoin transaction to the blockchain, it must be confirmed to verify that the transaction is legitimate. You would select a sender address, put it into your wallet and click send.

The node you’re using, be it a personal node or the one used by your wallet provider, will submit this data to the mempool or memory pool. There, your transaction will be placed into a basket with all other unconfirmed transactions.

Miners then select the transactions they want to place into a block and submit the block to be added to the chain. You will pay a fee for your transaction, which the miner gets to keep as a reward, and the rest of your Bitcoin will be transferred to that sent address.

How does Bitcoin transaction confirmation work?

Miners will then take your request, along with many others, and privately mine the coded request to ‘solve it’.

Once it has been solved by a miner, the miner adds it to their personal version of the blockchain. Then, other miners and other users who are known run nodes will review that the block meets Bitcoin consensus rules.

If it does, all nodes will verify that the first miner’s proposal is correct and valid, and the new block containing all of those transactions will then be added to the public blockchain. By being added as part of a block to the blockchain, your transaction is now confirmed.

What is the average Bitcoin confirmation time?

Bitcoin blocks containing all the most recent transactions are added to the blockchain every 10 minutes. That means, in theory, your transaction will receive its first confirmation within 10 minutes after a miner adds it to a block. Depending on the rules of the receiver, your Bitcoin should reflect after one confirmation, but it can take up to six confirmations.

How many confirmations does a Bitcoin transaction need?

Many Bitcoin wallets won’t process transactions until they’ve been confirmed at least three times. Confirmations are not a hard rule, and you’ll need to review your wallet or exchanges implementation to see how many confirmations are required for funds to reflect.

How to track Bitcoin transactions

When you send Bitcoin, in addition to the private key, you’re also given a Bitcoin transaction ID labelled as a TxID, this ID is unique to your transaction, and you can use it to track the details.

You can then grab that TxID and visit any one of many Bitcoin blockchain websites that are called block explorers. You’ll be able to enter your Bitcoin TxID, or your exchange or wallet address, to track your transactions.

You will see a summary of information about the transaction, including the number of confirmations it has. You’ll also be able to see the fee you’ve paid for the transaction. Every transaction comes with a fee that goes towards rewards miner’s receive for solving equations.

If you don’t want to use a third-party service, you can set up your own Bitcoin full node and check all your transactions via your node.

South African bitcoin pleb falling down the rabbit hole and willing to share every bump, scratch and knock along the way
View more articles from this author
PrevPreviousHow Bitcoin Can Be Lost?
NextCan You Delete A Bitcoin Wallet?Next