How Bitcoin Can Be Lost Forever

Home » Articles » How Bitcoin Can Be Lost Forever 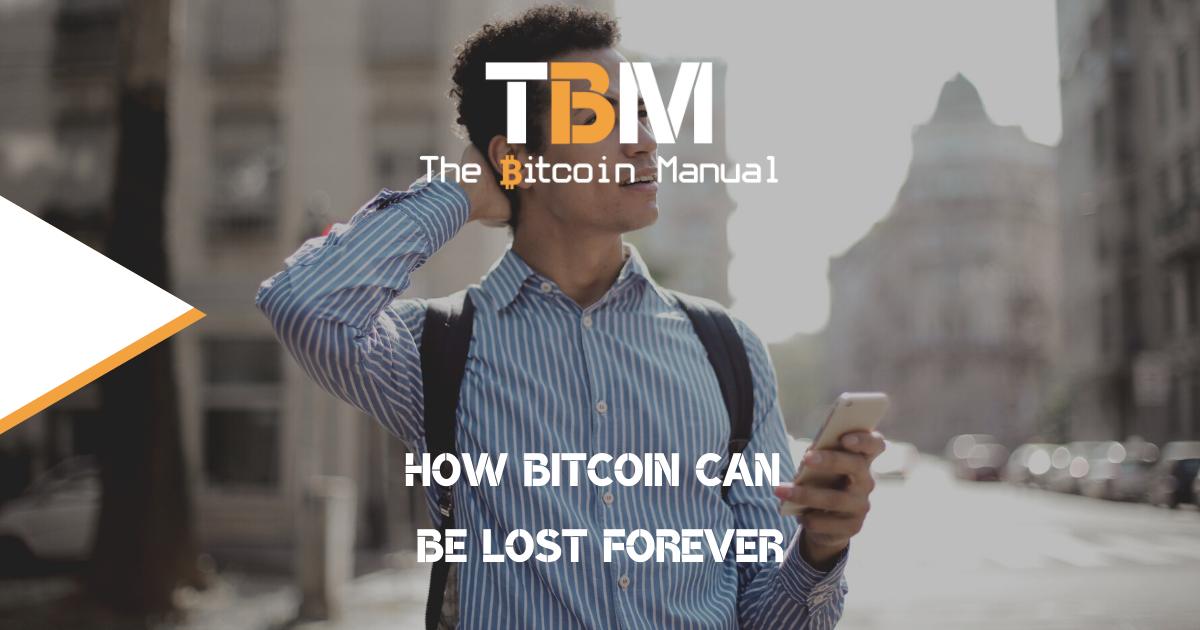 The rise of bitcoin has been quite the social experiment, with the discovery of digital scarcity being a challenging concept to grasp for many. The idea that something digital cannot be copied, is unique, requires real-world effort and energy to produce and can be personally secured is a lot to take in. Then add to that bitcoin’s ability to appreciate, and you have a recipe for regret.

In its first decade, there were very few people who thought bitcoin would reach the lofty heights in purchasing power it has today. People took it for granted, saw it as an internet play toy; it’s only internet money, it’s not real. In addition, interaction with the blockchain was not as polished as we have today, and while mistakes can still happen, in the early days, it was far more common.

Bitcoin has a supply of 21 million that is yet to be realised as mining new coins will continue until 2140. Yet every year bitcoin exists, users can and will lose their bitcoin. In most circumstances, these coins cannot be retrieved and permanently exit the currency’s circulating supply. More often than not, lost coins are due to user error and could be prevented.

So let’s look at these costly mistakes and how to avoid them.

What is considered “lost” Bitcoin?

The Bitcoin blockchain is an immutable ledger; when electricity is used to mine and secure a block, it means the value was expensed to secure the transactions, and due to the consensus of nodes, the ledger continues on, and bitcoin transactions are final. The final settlement element of bitcoin means there is little to no recourse for a mistaken transaction.

Basically, with bitcoin, there are no takebacks, no do-overs and no second chances.

Bitcoin, or rather the UTXO set that make up that bitcoin amount, is considered lost when no one has the ability to spend those coins or move them. Every on-chain Bitcoin is controlled by private keys, the same way physical keys control money in a safe or vault. Private keys create signatures, which are required to spend bitcoin. If the private key cannot be accessed or the bitcoin is sent to a public address with no private key access, it is considered lost.

Bitcoin works fine, but sadly, humans are prone to mistakes and the primary and only cause of lost bitcoin, not Bitcoin or blockchain technology.

How much bitcoin is lost?

The exact number of Bitcoin currently lost is unknown, and we can only make assumptions based on the blockchain’s activity. Some blockchain analytics companies claim that around 4 million or 20% of bitcoin has already been lost, but we cannot be entirely sure of these numbers.

Bitcoiners are naturally holders and see no reason to move their coins; some coins haven’t moved for years, but that does not mean they cannot be spent. As long as the private keys for those coins are accessible, they can be spent sometime in the future.

A famous example of unmoved bitcoin is the amount of bitcoin held by Satoshi Nakamoto. No one is certain what Satoshi did with the private keys to his bitcoin or whether the keys still exist, but the bitcoin has not moved since its creation.

Note: Stolen or seized bitcoin is not considered a lost bitcoin because thieves and authorities still have the ability to spend those coins.

How bitcoin can be lost?

There are several ways bitcoin can be lost forever, never to return to the circulating supply.

For more detail on how bitcoin can be lost, check out our guide here.

Can lost bitcoin be retrieved?

In most cases, the answer would be a resounding no. If the private keys are missing, the odds of you guessing the words and the correct order are astronomically small. It would be easier to try and mine a new bitcoin than spend resources trying to gain access to old bitcoin wallet addresses that have been lost.

There are people and firms that specialise in bitcoin wallet recovery, but you cannot approach them with no clue on where to look. Perhaps you have a partial seed phrase, or you have your keys on a hot wallet on a device; they may be able to recover it for a % of the coins as a reward.

A costly excercise, but it’s better than having nothing, I suppose. As with most things in life, prevention is better than the cure, so following the best safety and backup practices reduce your chances of ending up in these situations.

What does lost Bitcoin mean for the Bitcoin network?

Lost bitcoin is a horrible situation for the individual and a painful lesson to learn, but this is the price you pay for being negligent in a network that requires you to take responsibility and be your own bank. As for the rest of the bitcoin holders, it is by no means a bad thing. Fewer bitcoin is available to buy or sell increases the value of the remaining bitcoin on the network.

Bitcoin is infinitely divisible, so lost bitcoin does not harm the network as a whole as we can transact in trillions of satoshis, which will also increase purchasing power. Since Bitcoin derives value from its finite supply and the resources needed to produce, so every lost bitcoin will slightly increase the value of the remaining bitcoin in the network.

South African bitcoin pleb falling down the rabbit hole and willing to share every bump, scratch and knock along the way
View more articles from this author
PrevPreviousWhat An EU Mining Ban Means For Bitcoin
NextHow Long Does A Bitcoin Transaction Take?Next