How Long Does A Bitcoin Transaction Take?

Home » Articles » How Long Does A Bitcoin Transaction Take? 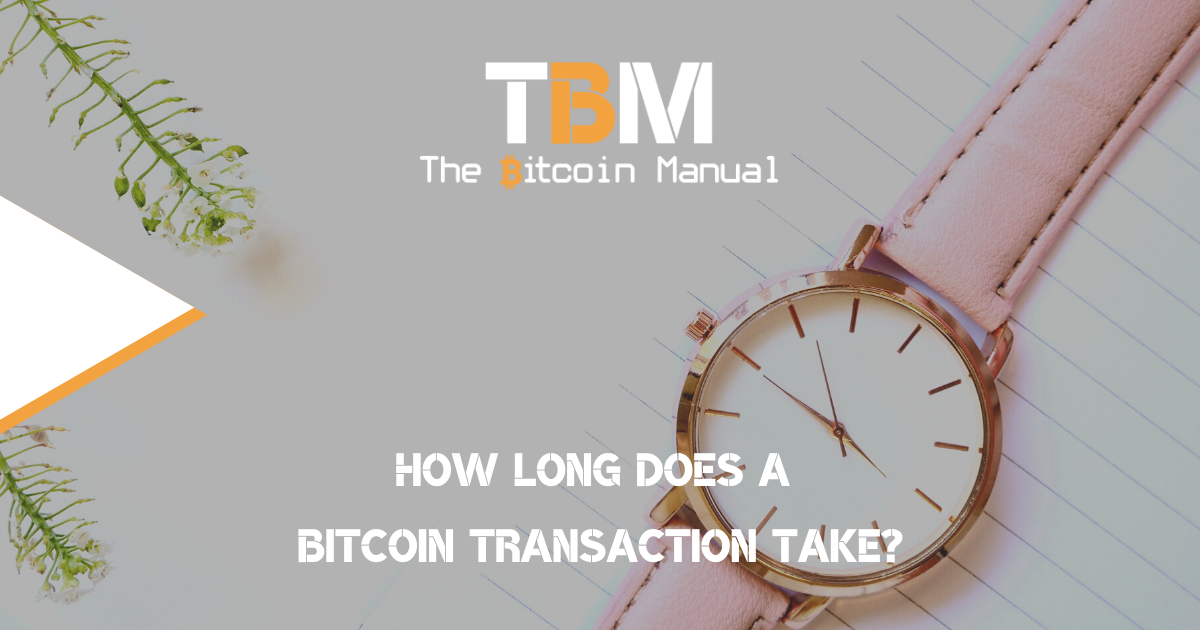 Making a bitcoin transaction for the first or one-hundredth time can be a never wrecking experience. Once your bitcoin is out in the ether, that is the mempool; waiting for those confirmations can rattle anyone. Your mind starts to wonder, did I use the correct address, did I set the proper fee, is the node im referencing providing false data.

A trait of Bitcoin is that all transactions are final; once broadcast to the base chain and confirmed, transactions cannot be reversed, a concept that can freak out many of us. Before jumping to the worst conclusion, you may want to learn how the bitcoin network handles transactions.

In the Bitcoin network, transactions committed with finality to the base chain require the average confirmation time, which is roughly 10 minutes. Depending on the wallet or exchanges may require more confirmations to reflect your funds; these can be 1 to 6 confirmations. Each confirmation will be around 10 minutes meaning confirmations can take up to 1 hour before the funds reflect.

The confirmations are not the only factor affecting transaction times, and they can vary wildly due to several factors, which we will review.

Sending Bitcoin on the base chain

Bitcoin is completely digital, so it has to follow the rules of the network to be able to move it from one wallet to another. The virtual currency is guarded by a distributed ledger called blockchain, which comprises transaction and signature records. For all Bitcoin, you need two things a set of different keys, namely a public and private key.

When you send Bitcoin, the transaction you broadcast a message to the blockchain via a node it could be your node or a third party node. In the message, the following is included:

Once the blockchain acquires the transaction message with the above details, the transaction is put into a mempool—a waiting room where the miners will look for transactions to confirm on the network.

What is a Bitcoin mempool?

The memory pool or mempool is a record of all Bitcoin transactions that have been broadcast by various users but have not yet been validated by a miner and added to the next block on the blockchain. A mempool is temporarily stored on each individual node in the network.

Mempool transactions are periodically cleared each time a new block is added to the blockchain. Pending transactions waiting in mempools will only be cleared (processed) once they meet the minimum transaction fee threshold. All transactions in the mempool are bidding for block space, and if you do not provide an attractive bid, your transaction is pushed down the list. Transactions with low fees will often have to “wait” more than one block in the mempool until they are processed and confirmed.

Once you sign your bitcoin transaction with your private key and broadcast it to the network with a fee, it moves to the mempool, as mentioned earlier. Miners will scour the mempool and put together the most rewarding transactions for their next block — especially when the mempool is full.

Bitcoin block space is limited given that block sizes are fixed at 1MB, and there’s a limited number of miners, you may end up having to pay a much higher fee to get first-class treatment. Once a miner solves the latest block and commits it to the blockchain along with your transaction, it broadcasts it to the network.

All nodes then review the proofs and confirm that this is the latest block to be added to the chain. If your transaction is in that block, you will receive a confirmation. As new blocks are added, they provide additional confirmations that your transaction has been secured and processed.

How to check bitcoin transaction times

There are some great tools out there that can give you an estimate of the average time it’ll take to complete a BTC transaction or transfer. The best option would be to run your own full node, but if you cannot, you can use various block explorers to review the data from the chain.

How to speed up Bitcoin transactions

Besides increasing your transaction fee to get ahead of the queue, another way to speed up your Bitcoin transaction is to plan your transfer during off-peak periods. Using a blockchain explorer, you can see the average fees and the size of the mempool, which will show you the number of unconfirmed transactions is at its lowest. You can then pick your time to transfer to avoid congestion.

Note: A new Bitcoin proposal is being discussed, known as check template verify, which will allow you to set the mining fee you want to pay and leave your transaction in the mempool until conditions are met.

Sending Bitcoin on the liquid network

Since the liquid network has fixed block times of around one minute, a transaction can be confirmed in 1 minute or up to 6 minutes, depending on the confirmations you need with your wallet or exchange.

Sending Bitcoin on the lightning network

The Lightning Network (LN) is another second layer solution that uses a mesh network and payment channels that are anchored on the main bitcoin blockchain. Bitcoin owners who want to use lightning cooperatively create a 2-of-2 multi-sig address and send funds into this special lightning wallet to create a lightning bitcoin balance it.

The funding usually comes from one party, but one channel owner can, for example, pay the other channel owner with the funding transaction by allocating the payment amount to them in the channel’s initial balances.

Payments on the LN are subsequently performed by the channel owners renegotiating their balance shares of the anchor’s funds and can be zipped around to anyone with a lightning network-enabled wallet. Since there is no need to touch the chain, confirmations are near-instant and far cheaper.

Only once you close your lightning channel and move your funds back to the base chain will you need to pay the mining fees like with a standard bitcoin transaction.

Sending bitcoin via a custodial service

If you’re using a custodial service like an exchange or a custodial wallet where you do not hold the keys, you are not dealing with real bitcoin, but bitcoin IOU’s similar to the way you use cash in the bank. The physical asset isn’t there for you to control; you are asking a third party to move balances around.

When you send bitcoin via a custodial service to another custodial service, you’re not using any chain. You are merely crediting another account while drawing yours down. The experience may be one of sending bitcoin as value is transferred, but a third party hands the changing of funds, and it never touches the chain.

The custody provider holds the bitcoin and moves balances around on their internal servers. This can be faster and cheaper to use, but remember your funds are not in your possession and are accepting third party risk.

We are sending value with real finality

Sending bitcoin can take an hour, or it can be nearly instant for low-value transactions using second layers, but regardless of the on-chain method you use, it is all final settlement. These are irreversible transactions, and the recipient can send those funds immediately after confirmation. There is no need for banks to clear it or credit you funds in the meantime while they settle between banks on the backend.

There is no risk of rehypothecation, and it can be done globally at any time; that is the power of a bitcoin transaction.

South African bitcoin pleb falling down the rabbit hole and willing to share every bump, scratch and knock along the way
View more articles from this author
PrevPreviousHow Bitcoin Can Be Lost Forever
NextWhy Bitcoin Needs Layer 2 SolutionsNext