What An EU Mining Ban Means For Bitcoin

Home » Articles » What An EU Mining Ban Means For Bitcoin 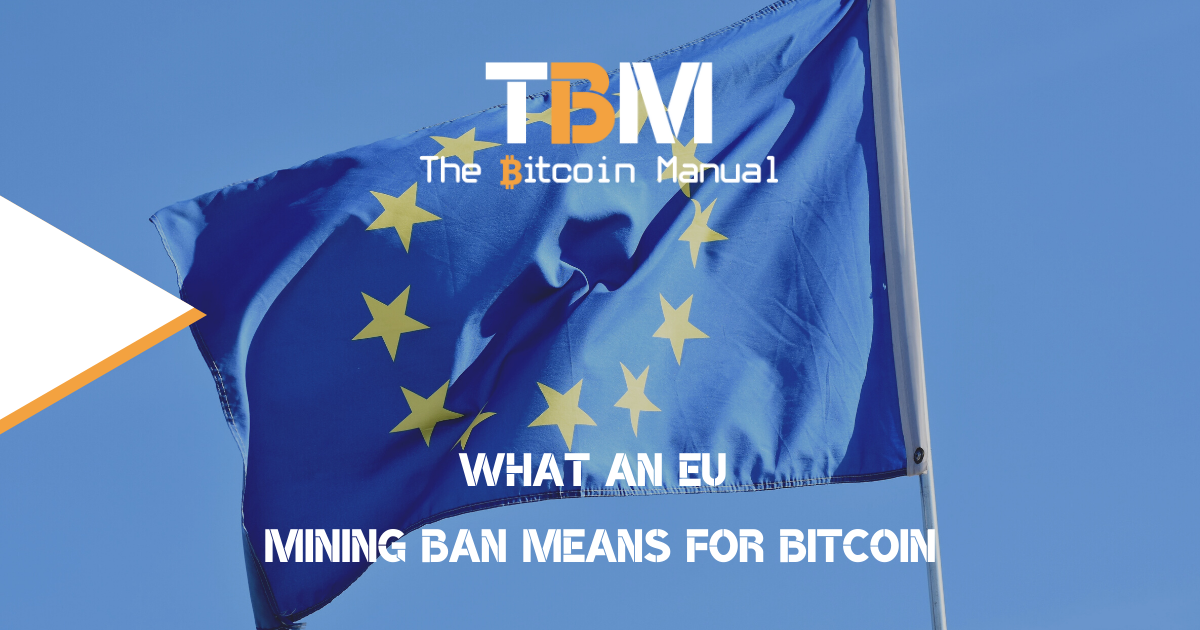 2021 marked the year of the significant bitcoin mining migration, as China called for a mining ban. The ban is a government response to the growing local bitcoin scene drawing resources from the country. The motivation for the ban is said to be to protect against capital outflow, reduce demand for energy on their grid, and reduce the need for mining equipment production.

The ban hit the bitcoin network hard, with China having over 34% of hash power. A fact that has long been critiqued as a sign of centralisation. An issue that has been remedied thanks to the abolishing of bitcoin miners and, of course, swift implantation of this regulation. Affected miners had to effectively shut down operations and either sell their equipment to foreign competitors or move their operations to different countries.

We saw many Chinese miners move to the US, Canada and Eastern Europe, as well as a few trickling into Western Europe. During the migration, hash power was hit hard. Dropping from a peak of 178m Terrahashes to a low of 86m Terrahashes, a drop of over 50%.

During that time frame, the price also took a hit, dropping from around $60 000 to as low as $29 000, but that didn’t last long, and by the end of the year, price and hash rate hit new all-time highs.

The network continues to thrive.

Despite the massive loss in hash power and reduced access to energy from China, the incentive structure of bitcoin proves that it cannot be stopped. Miners did their homework and migrated to countries where they could tap into the cheapest electricity and continue operations. At the same time, miners who were unaffected kept the network going and provided opportunities for smaller operations to secure blocks and bitcoin rewards.

The network adjusted to the drop in hash power, and once the new difficulty adjustment kicked in, it was business as usual. If bitcoin can recover in less than six months from the largest producers in hash power going offline, it shows how robust the system is and how entrenched the incentives are to mine bitcoin.

Mining still goes on in China.

Despite what some reports tell us, there are still mavericks willing to mine inside China’s border and take the risk. The miners can produce hashes with local energy and submit them via masked connections to block their local IP. These may be smaller operations, mobile operations or home ming operations, but I have no doubt bitcoin mining in China continues to this day.

The effect of the big mining migration

Since operations have adjusted to new countries, naturally, demand for energy increases in those countries as bitcoin companies come in to compete for electricity. EU countries, especially up north, have a distinct advantage in that the colder temperatures provide for a more effective climate for bitcoin mining.

There are several countries in the EU that contribute to bitcoin ming with most of them providing less than 1% towards the global supply of hash rate. At the moment, Germany and Ireland make up the biggest part of EU related mining. The two EU members sport a combined 9% of global hash rate. A reasonable amount, but small in comparison to what China had prior to the ban.

These poor policies and implementation are naturally looking for a scapegoat, and bitcoin provide a ready-made villain to place the blame on energy costs.

Sweden currently has 1.16% of the global hash rate but have already hit out and called for a ban on proof of work mining with neighbours Norway seemingly in agreement. They have begun discussions on bitcoin mining bans, and these talks have started to interest other EU members.

When we consider the amount of hash rate in Sweden or even the entire EU, it’s hardly that big of an impact on the network, and their share of the hash rate should easily be absorbed by other countries. Sure, the hash rate may drop slightly in the short term, and the price may take a knock, but I hardly see this as cause for concern.

Pushing the incentive to other countries.

As I mentioned, European countries have an advantage over other parts of the world due to their energy mix, infrastructure and climate, but shooting themselves in the foot isn’t something that can be reasoned with using logic. Every government will take a different stance. Developed countries seem to feel that they have far more to lose from bitcoin than gain. These nations benefit from the current global monetary system and do not want to risk their position in the present financial spigot.

These bans will only drive incentives towards other countries that may not have had the most attractive energy costs compared to Europe, but now it seems more favourable. It allows developing nations to leverage bitcoin to create more energy production in other parts of the world and distribute the output of new bitcoin away from power centres like the EU.

Indeed the US will benefit, but they can only offer up so many resources, and it allows the likes of Latin America and Africa to stake their claim in the bitcoin network. These parts of the world do not have the most incredible energy mix or the most robust grid, but having an incentive like bitcoin could see investment flow into these regions. To create more energy for bitcoin but as a result, supply more energy to these regions for the development of other industries too.

They are pushing more decentralised mining in Europe.

As in the case of China, I don’t see mining disappearing from the continent EU completely. It will take shape in different forms. Instead of the large publicly traded companies or massive private equity firms funding large scale industrial operations that are subject to regulation and government pressure, it will come down to the individual.

These mining operations could take the shape of home mining or garage mining on a small distributed scale providing non-KYC sats to more citizens in the EU. It could also find niches like tackling stranded energy in remote parts of the region or offering hybrid heating solutions for buildings.

The truth is “bitcoin honey badger don’t care”, and any time you attack it, you only push for more decentralisation and a more robust network.

South African bitcoin pleb falling down the rabbit hole and willing to share every bump, scratch and knock along the way
View more articles from this author
PrevPreviousWhat Is Check Template Verify?
NextHow Bitcoin Can Be Lost ForeverNext