A Breakdown of Bitcoin Home Mining 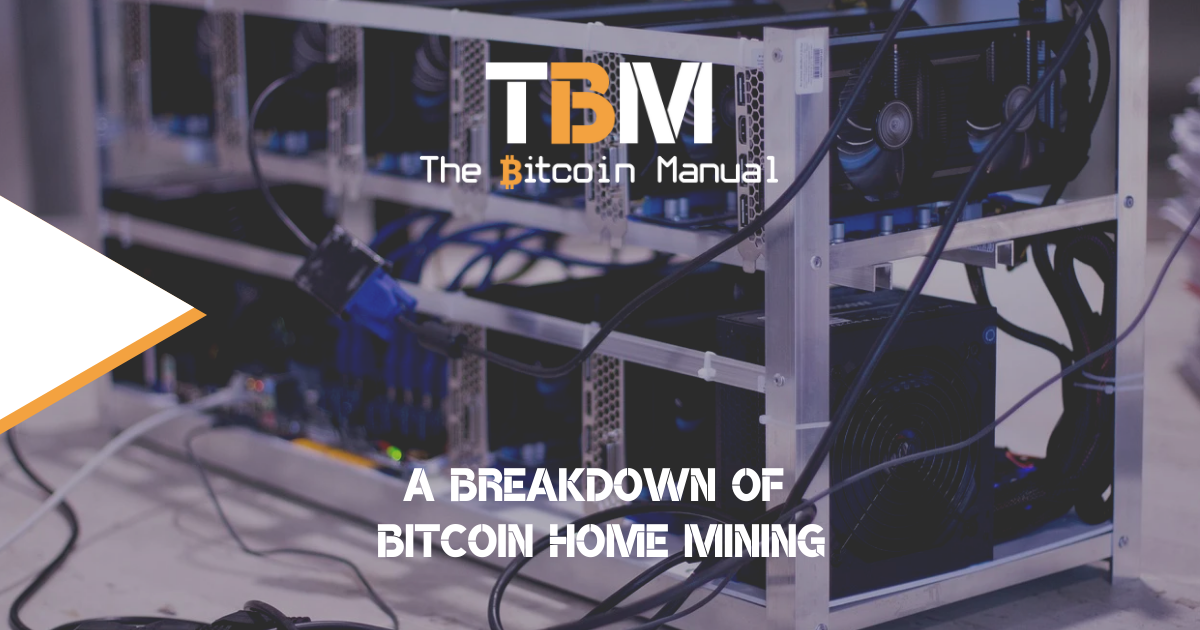 So you’ve heard about bitcoin mining, and you’ve seen theirs an opportunity to mine these digital tokens worth thousands of dollars. I’m sure you’ve thought, why buy bitcoin when I can mine myself, right? All I need is a few computers, and I can start printing digital money. Maybe you’ve heard stories of people who mined bitcoin with their laptops in the early days and made off with millions. Perhaps you’ve listened to someone telling you they’re making a lot of money home mining, and they’re trying to sell you on the idea.

Regardless of your reasoning, the outcome of bitcoin mining remains the same, a tough battle to secure bitcoin. When you decide to mine bitcoin, what you’re essentially doing is taking your electricity passing it through a specialised computer to create hashes. These hashes are submitted to a mining pool to secure the network and help lock in the next block.

If you or your mining pool guess the correct computation to secure the next block, you are rewarded with freshly minted bitcoin. At the moment, 900 new bitcoin are created every day, and that’s what you will compete for as a miner.

Mining competition grows every year, and you can see the level of competition by the growth in the hash rate to secure the network. So if you think you’re going to have a free shot at that 900 bitcoin, you’re sorely mistaken. There are mining operations of all sizes worldwide trying to get as many new bitcoin as possible.

Gone are the days of being able to mine bitcoin on your laptop or using some crudely assembled rig of GPU’s you got at your local computer store. If you want to make the best go of it, you need a machine powerful enough to push out as much hash power per kilowatt-hour of energy used.

Once you’ve identified the machines you want to buy, you’ll need to decide how much you are willing to invest in your setup. You can choose between cheaper second-hand mining rigs or pull something off the shelf brand new. While the second-hand rigs may be heavily discounted, you don’t know how much life is left in them. In some cases, you may score and have one that can run way into profit and run for years.

In other cases, it could go bust within a few months and never repay your initial investment. The same can happen with a new device, but your chances of getting a shoddy machine that doesn’t run long enough to make a profit are far smaller.

The cost of your rig is a crucial step for any home miner as this is part of the floor you set for your investment. You would also need to spend money on other aspects like:

If you plan to get the most out of your operation, this isn’t a plug and play set it and forget it kind of operation.

Apart from the cost, there are other issues you need to be aware of before you place your first order:

Besides these issues, ASICs are pretty rugged. They do not need an air-conditioned environment. They can tolerate dust, heat and humidity to a certain extent, but this is your precious money machine. Why would you take any chances, am I right?

Once you’re plugged in and producing hashes, you need to commit them to the network, and WiFI will not cut it. Bitcoin ASICs are speciality devices for mining bitcoin. Most don’t even have a power switch, much less WiFi and USB compatibility. So, you’re going to need wired internet.

You should conder picking up a switch and some CAT-5 cables as you start to plan out your setup, another expense you will need to account for on configuration.

The good news is once you’re connected, it won’t labour on your internet connection since these machines use very little data. If you have stable broadband internet, you should be good to mine, even with multiple ASICs units.

Most of these rigs run on 240 volts and draw around 15 amps or more. In some parts of the world, this might be a standard plug. The typical wall plug in the united states is 120 volts, so you may have to do some electrical work before you get started. For each rig you intend to run, it’s recommended you dedicate a 240-volt, 20-amp circuit. Having one circuit breaker per machine will give you more flexibility for repairs and limit the “blast radius” if something goes wrong on one of the circuits.

Now for the electricity, at current prices and competition, you can get away with mining at up to $0.25 per kWh and still make some profit, according to cryptocompare. This is not a set figure, and you should constantly monitor your output to measure your cost basis.

Industrial miners aim for around $0.03 per KwH to remain profitable in their large operations, and while they have massive margins, they also have enormous initial costs they need to recoup. Taking these figures into consideration, if you can access electricity between $0.04 and $0.15, you could have an excellent operation going.

So your rig is set up, it’s running smoothly, your cooling system is in place, and you’re ready to mine some bitcoin. Remember that graph I showed you earlier regarding hash rate? This is where it comes into play; it’s the measurement of competition for new bitcoin. As that rate increases, the change of your hashes among that bunch unlocking the next block reward, become ever smaller.

You might mine for years and still not solve a block at that rate, but the electric bill comes every month. The solution is to join a mining pool, which is a group of other miners all working together to try to solve blocks and share the rewards. Pools are free to join, but you will pay a fee in specific setups. You only need an email address. When you sign up, you’ll pick a username.

There are many mining pools available such as:

They all work and pay around the same, and each pool will have a URL that you’ll need to enter into your miner. So the miner knows where to contribute the hashes it creates.

Bitcoin mining is very much profitable, on the industrial and the home mining scale, but it doesn’t mean it’s a guarantee. It will rely on several factors as mentioned above and your ability to weather different market forces.

If you’re trying to get into home mining for a quick profit, thinking you’re going to mine a few coins and flip them for profit over a short period, you are sadly mistaken. The bitcoin mining game is the most ruthlessly capitalistic market to try and compete in if your goal is short term profit. Bitcoin mining is the one market where thinking short term will have you carted off the field pretty quickly.

Bitcoin mining will cost you money and generate a lot of heat, and innovative bitcoiners have found ways to augment this trade-off. Some use their ASIC’s to heat the water in their pools or hot tubs, while others are using them to heat their homes in winter. If you will spend money on mining bitcoin, why let that heat go to waste? Why not get the full benefit of that initial spend on energy.

So why do people home mine?

Home miners are typically bitcoiners committed to supporting the network and are not looking for short term profits. They are happy to mine regardless of the rewards to help secure the network and get a small reward today for the proof of work. They believe bitcoin will continue to appreciate. Even if they are not profitable today, the purchasing power measured in bitcoin will eventually see them become profitable the longer they hold and the longer they mine.

Home miners may also be bitcoiners who want to earn bitcoin that is not tied to their identity; by mining, you get access to virgin bitcoin with no transaction history, and no one can tell who owns or owns that bitcoin.

I am not trying to discourage anyone from taking up home mining. I think it’s a valuable part of the ecosystem as it distributes the sources of hash power and improves the distribution of non-KYC bitcoin.

By having home miners in play, they act as the first line of defence should industrial mining operations come under pressure or if they are banned from operating in certain countries. It’s far easier for governments to attack more significant players like mining companies. When it comes to individuals, it’s way harder to get them to comply with anything.

If you want to contribute to the bitcoin network, earn some extra bitcoin, secure non-KYC bitcoin or augment your current stacking of sats, then home mining is a great option.

I still want to mine, but home mining is not ideal.

If you want to mine bitcoin, but you don’t have the technical expertise, access to the equipment, access to cheap or reliable electricity, or you simply don’t want to deal with the drama. A hosted mining option could be your best bet. A hosted mining facility allows you to purchase a mining rig and set it up in their facilities. They will enable you to rent a bay in their mining facilities for your rig, and you can mine through their service using your equipment.

A hosted miner gives you the chance to level industrial costs for electricity and economies of scale. Instead of competing with these big players, you contribute to their hash power and get a cut of the rewards.

Hosted mining has pros and cons, something we will tackle in a later article.