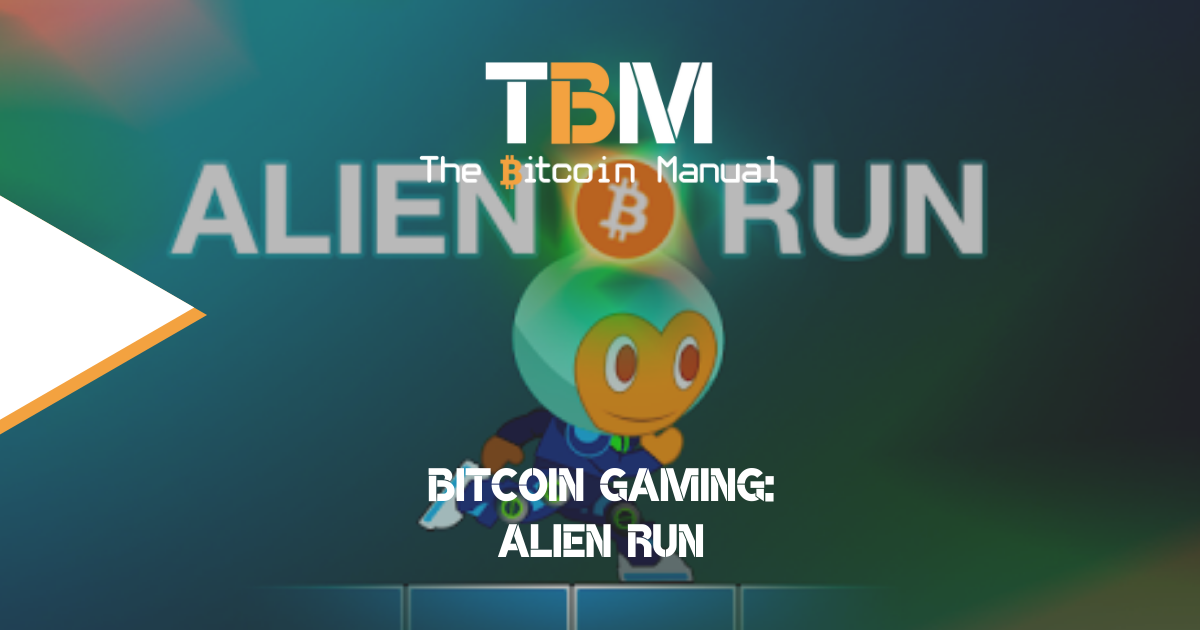 Bitcoin is starting to make its way into more mainstream operations as startups, and indie operations look at new ways of leveraging the technology. The idea of earning digital points has never been lost on gamers. They’ve been farming digital in-game currency for years to unlock all sorts of boosts and upgrades, but what if that in-game currency could be hard currency.

What if you could earn Bitcoin instead of some meaningless in-game points so that you could use it in our outside the game? Wouldn’t that be a revolutionary upgrade to gaming?

We think so, and so do many of this latest range of mobile game developers who are starting to put satoshis in the forefront of their games incentive structure. One of those early-stage games leveraging bitcoin is a mobile arcade game known as Alien Run, one of the many games we’ll be reviewing in future.

What is Alien Run?

Join Daniel D’Alien, the games lead character, on his most fantastic Adventure yet! Playing as Daniel, you will need to navigate a host of everchanging levels, dodging obstacles and even handling reversing gravity. Gamers will earn free bitcoin by playing new unique levels every day in this runner game. Claim your rewards by playing daily missions and exploring all the game offers with hundreds of levels to keep testing your skill level!

Alien run is a mobile game, there is no gambling in this app, and they will never ask you for money. Your task in the game is only to watch the character move through the course and tap the display to jump. There are many different obstacles, so you have to be diligent. As you progress, your alien runs faster and faster through the levels. It’s not hard to play this game, but you need to be attentive, or you will keep dying.

If you’re worried about getting into this game cold turkey, don’t worry, the mechanisms are explained at the start of the game and through the tutorial level.

The game also has a practice area with several difficulty levels.

So you can play around before you try to make a run for the money.

It’s just good fun and a great way to pass the time with a free game that distributes free bitcoin to players. The game pays out Bitcoin every week! If you are going to try and cheat the system, note that you could put your rewards at risk. The developer does reserve the right to deny payouts to any users suspected of fraudulent activity.

Help Daniel make it through five levels of blocks by running, jumping and using his special powers to get to the end and claim bitcoin prizes!

Play this mode every hour and help Daniel navigate the blockchain through a series of fun and challenging levels to claim your hourly bitcoin rewards.

In this mode, you can play through up to 8 levels and claim a bigger bitcoin prize for each level you successfully complete! The levels get harder and harder, so if you want some guaranteed bitcoin, you can stop at any time and claim a small reward for the number of levels you complete. The more levels you finish in the Daily Mission, the more bitcoin you earn!

Regardless of the type of mission you choose, the levels can get tedious at times, but if you’ve got time to kill or have a boring day, you can earn between 50 and 500 satoshis.

Where does Alien Run get the funds to reward users?

Alien run leverages A Mobile Ad Manager to run mobile ads which display after you complete certain levels or perform specific user actions. These ads can be somewhat annoying as they are unskippable and can affect your gameplay, but if you’re willing to give up a little bit of your time, you ensure the game has a revenue stream to continue to reward all players.

If you’re not a fan of in-game ads, you may want to give this one a miss.

How to withdraw bitcoin from Alien Run

You do not need to register to play the game, and you can play anonymously. However, if you’re thinking of extracting, you will need to sign up with an email address. Once registered, your payouts will be made automatically using the signed up email address as the unique identifier. Your balance will only be paid out once it’s hit 10 000 satoshis or more.

Alien Run also has a referral program; once you’ve signed up with the game, you can generate a custom referral link and share it with friends and family. If users sign up using your link and play the game regularly, you will receive %20 of the commissions on everything they earn.

What I thought of Alien Run

Personally, I got bored of the game pretty quickly, it was not that the gameplay is boring, but there is a distinct lack of interactivity. You’re simply waiting to time certain jumps, and I would like to have seen more obstacles, perhaps other power-ups or levels, to make the gameplay more interesting.

I would have also preffered if the game had a bit of story behind it, some lore to flesh out the character rather than simply relying on the fact that it’s a game where you can earn some bitcoin. That way, it gives a base for adapting the game by adding new levels, new gameplay modes because there’s a story behind the character threatening everything together, so there would be a platform for expansion.

Regarding the bitcoin payouts, I am disappointed that they have not made use of liquid or lightning as it would be a far better option for these microtransactions, and the developers are really missing out by not leveraging second-layer solutions.

I would have also preferred if your wallet could have also been used to sign your account, so you didn’t need to provide your email address; that would be a nice touch for those not wanting to provide their contact details to another game.

The creator of the game Bitcoin Aliens has been in operation since 2014 and has integrated bitcoin into a full roster of games. Their commitment to bitcoin gaming has seen their games give away over 1090 BTC and grow every day. Join their growing community of over 2.5 million players and start earning Bitcoin from your phone!

South African bitcoin pleb falling down the rabbit hole and willing to share every bump, scratch and knock along the way
View more articles from this author
PrevPreviousA Breakdown of Bitcoin Home Mining
NextCan You Earn Bitcoin From Gaming?Next