Home » Articles » Can You Earn Bitcoin From Gaming? 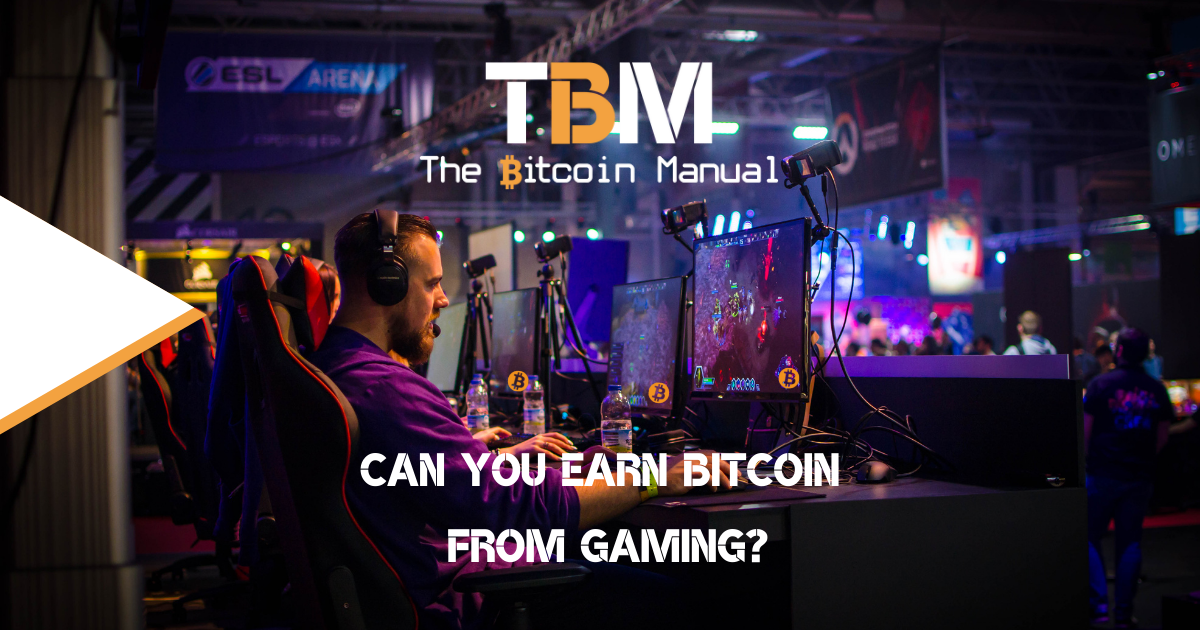 I’ve always had a soft spot for gaming. It formed such a big part of my childhood when the first console we had was the Atari 2600 with Zelda and Centipede.

As time went on, we moved to the world of Nintendo with the SNES, being engrossed with Mario Kart, Donkey Kong and we even had the Scope Gun!

The teenage years saw us move away from the 8-bit and 16-bit shenanigans towards Sony and the Playstation games such as Need for Speed, Crash Bandicoot and Spyro the Dragon.

My final console I have, which is cutting a lonely, dusty figure, as the last time I used it would have been in 2015, is the Xbox 360 Elite, playing games such as Burnout, Call of Duty and Forza.

All the while, I still gamed on the PC from Windows 95 with classics such as Whiplash and Screamer, before being scared shitless by the immersive Half-Life 2 and discovering Counter Strike: Source.

With the advent of smart phones, I got involved with the classics like Candy Crush, some word games, Sonic and Gardenscapes but felt like they were such a massive time waster without getting much in return.

Nowadays, I barely have time for any of these fun past times but when I discovered recently that there are games that tap in to Bitcoin’s lightning network, I started getting excited!

You might be thinking that gaming on the Bitcoin blockchain itself isn’t possible and you’d be right.

Remember, Bitcoin’s technology is just a means to send Bitcoin from one person’s wallet to another without the need for a 3rd party i.e. peer-to-peer digital cash.

What the gaming companies do is build their game using their own technology and use Bitcoin’s decentralised payments system to reward gamers using lightning.

The lightning network is a 2nd layer built on top of Bitcoin’s mainchain to facilitate millions more transactions instantly with very low fees.

Thanks to the latest Taproot upgrade in November 2021, this has made developments on the 2nd layer easier to facilitate and is ideal for micropayments.

I have to admit, I wasn’t aware of too many games that were using Bitcoin only but when I dived down the rabbit hole, I was very pleasantly surprised.

There are actually over 30 games that we’ve found so far and some of these are barely a couple of weeks old. Some games are more developed than others but you can find out a little more about them in our dedicated page here.

The current issues are that the games are still very much under development and can be buggy, they could have their BTC reserves depleted by hackers or they run out of funding to continue work on the game.

Of course, if the games start shitcoining then that’s another concern and you should stop playing. I know I would lol!

Now don’t expect to be making millions and quit your job as it’s likely that the games only pay out a few sats here and there but hey, it’s better than nothing and for doing something fun to pass the time, I’ll take whatever sats I can get!

This is a very exciting time and we’ll be getting involved a lot more here at TBM, giving our reviews of the games that are out there so far and hope to shed some light on them.

We are always looking out for any games that are being developed so feel free to contact us if you are working on a Bitcoin only game.

From what I’ve researched so far, there are all kinds of games going from mobile to PC and even esports wagers on popular free to play games.

It’s about time I scraped the rust off my inner gamer and it looks like Bitcoin gaming is calling… time to earn some sats!

British bitcoin pleb falling down the rabbit hole and willing to share every bump, scratch and knock along the way
View more articles from this author
PrevPreviousBitcoin Gaming: Alien Run
NextHow To Send Bitcoin Through DiscordNext