Why Low Fee Or Free Blockchain Transactions Is A Lie 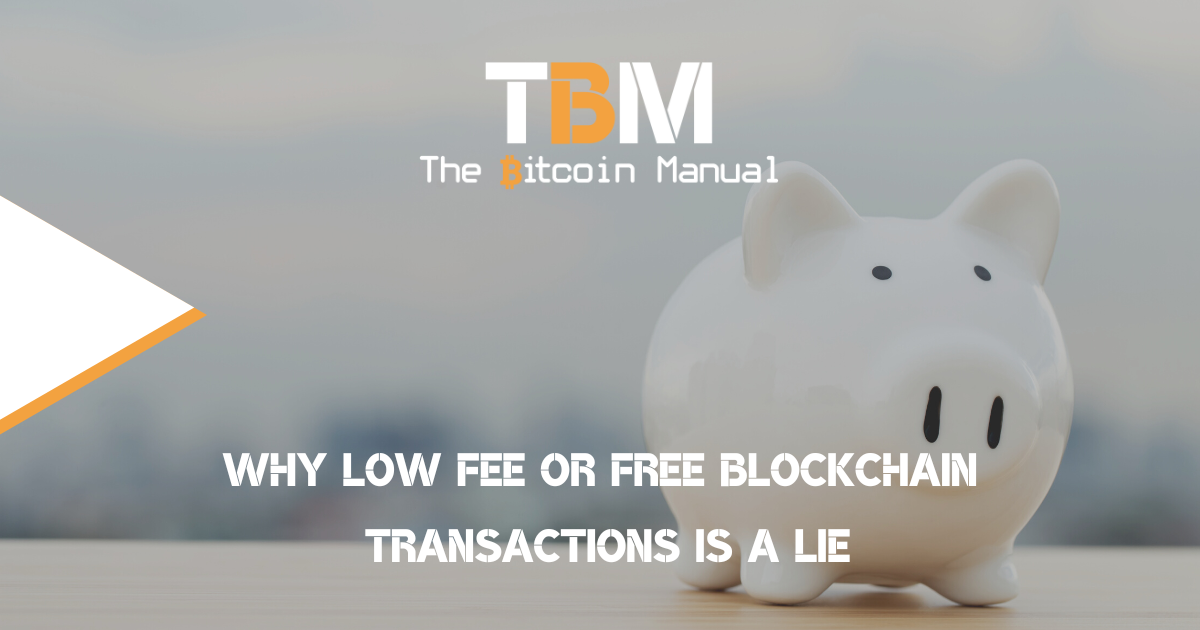 As a bitcoiner, you have to deal with all sorts of FUD and malicious marketing by unregistered securities pretending to be currencies. Users and holders of these securities will look for any excuse to sell you on their solution.

If there’s one critique that these proponents continue to hold onto, then it’s the fact that bitcoin is an old boomer coin that is slow and most importantly expensive to use.

These Shitcoiners either through malicious intent or naivety will try to sell you on their solution, a chain that has by some miracle found a way to improve on bitcoin while keeping fees low or having no fees at all. When we have a fiat mindset, price is always on your mind and you never think of quality or trade off’s. It’s why companies can get away with “shrinkflation” and you continue to support them, even though you’re getting less value for money.

There’s an old saying here in South Africa “goedkopp is kak koop”, which roughly translates to if it’s cheap, it’s probably shit. So let’s take a look at the argument made by low fee chains and why it’s not all it’s the marketing team promises you.

Bitcoin fees get a bad rep

The average fee for the bitcoin network stands at around 0.000033 BTC or 3300 satoshis, in USD terms it would be around roughly $1.50, which isn’t the worst fee you’ll ever see, the network has had fee spikes to a high of $58 due to competition for block space at very specific times.

These spikes have seen bitcoin receive the branding of an expensive blockchain and are used as a narrative to justify using another chain instead.

Very few cryptocurrency advocates will mention to you, how to use bitcoin in a cheaper fashion, such as leveraging second layer solutions such as the Lightning Network or Liquid Network. It’s not in their benefit to do so, the benefit is to encourage you to move over to a network where they can sell you on a native token and pocket fees.

As soon as bitcoin fees tend to rise, you’ll hear these shills come out and claim their chain is cheaper or even fee-less.

The importance of transaction fees

To most newbs getting into the bitcoin space, they see fees as a negative, it means I have less of my coin when I move it, why do I have to pay fees?

Well, you pay fees to secure the network and encourage miners to provide hashing power, it’s not a tax, for your fees you’re getting the guarantee that you’re securing your value in the strongest computing network in the world, and that a transaction cannot be rolled back.

Bitcoin transaction fees are also an essential component of the blockchain network for the prevention of spam transactions that could slow down and clog the network.

Bitcoin was created (by a person or group that remains unidentified to this day) as a way to conduct transactions without the intervention of a trusted third party, the market for block space sets the price for transactions on the network. Bitcoin is not a company, unlike these other blockchains, where they’ve raised private capital and sell their premine tokens to users to keep their treasury stocked to pay for hosting costs.

These chains have companies behind them, these companies can absorb costs for some time, to provide cheaper fees. They either fund it through debt or equity sales of the holding company or offset it through the release of premine tokens onto the open market, they can acquire fiat to pay for more centralised infrastructure.

As a user of these chains, you might be suckered into a teaser rate you can enjoy now, but if this chain were to scale, it would be a thing of the past, and locking more wealth in this chain can cost you down the line. Alternatively, they will continue to hide the cost of fees through inflation of the token and those who hold the native token will be debased to hide the direct cost of fees.

When you use these chains, sure you’re getting a cheaper fee upfront or no fee, but you’re taking the risk of using a network that can be taken down, can be halted, can be shut down, doesn’t have a proven track record and you’re using a native token with low liquidity and regulatory uncertainty.

Competing on fees is a race to the bottom

The fee problem was first associated with bitcoin, and other chains came along like Bitcoin Cash, Litecoin, and Dogecoin offering cheaper on-chain transactions. These chains used lower fees as a marketing tool to sucker people out of the bitcoin network, into their network but never informed people that to provide cheaper transactions, they had to make trade-offs in security and decentralisation to achieve it.

The issue with competing on fees is that every blockchain has an upper limit on the basechain where throughput cannot be increased and once it gets there those same people you attracted with low fees will migrate to new chains.

We’ve seen this happen with Ethereum, where stablecoin holders have since moved on to chains like BNB and TRON simply because they offer the same features, but at a far lower fee. These consumers don’t care about security or trust, they only care about how much it costs to transact, they’re not there to store value long term, they’re there to use a medium of exchange.

Chains that compete for these consumers will continue to centralise or make more security trade-offs to provide faster and cheaper transactions until you’re back to being a PayPalesque Neo Bank. If there was any time that being pennywise but pound foolish was evident, then it would be in the case of chasing after the lowest blockchain fees.

How to pay lower fees and still use bitcoin

Depending on the region you live in, you may have to purchase bitcoin through a centralised service or go through a P2P market. Before you make a purchase on an exchange, review the fees they charge for

Factor these costs into your purchases to make sure you’re not getting overcharged and compare it with other service providers so you find the most cost-effective means of stacking sats.

If you’re planning to make regular bitcoin transactions for small amounts, you may want to consider using a Liquid wallet or Lightning wallet. These side-chains allow for cheaper transactions and have exchanges that support them directly, you can buy bitcoin already on Liquid or Lightning and withdraw it to your wallet for a relatively low fee.

Once you have a large enough amount, that you wish to secure on the basechain you can either peg out or submarine swap back to the main bitcoin network.

How are you handling fees?

How have you been handling your bitcoin? Have fees been a problem for you? Let us know in the comments section down below, we’d love to hear from you.

South African bitcoin pleb falling down the rabbit hole and willing to share every bump, scratch and knock along the way
View more articles from this author
PrevPreviousHow Bitcoin Could Play Out In The Central African Republic
NextHow To Curb Email Spam With BitcoinNext