How Bitcoin Could Play Out In The Central African Republic 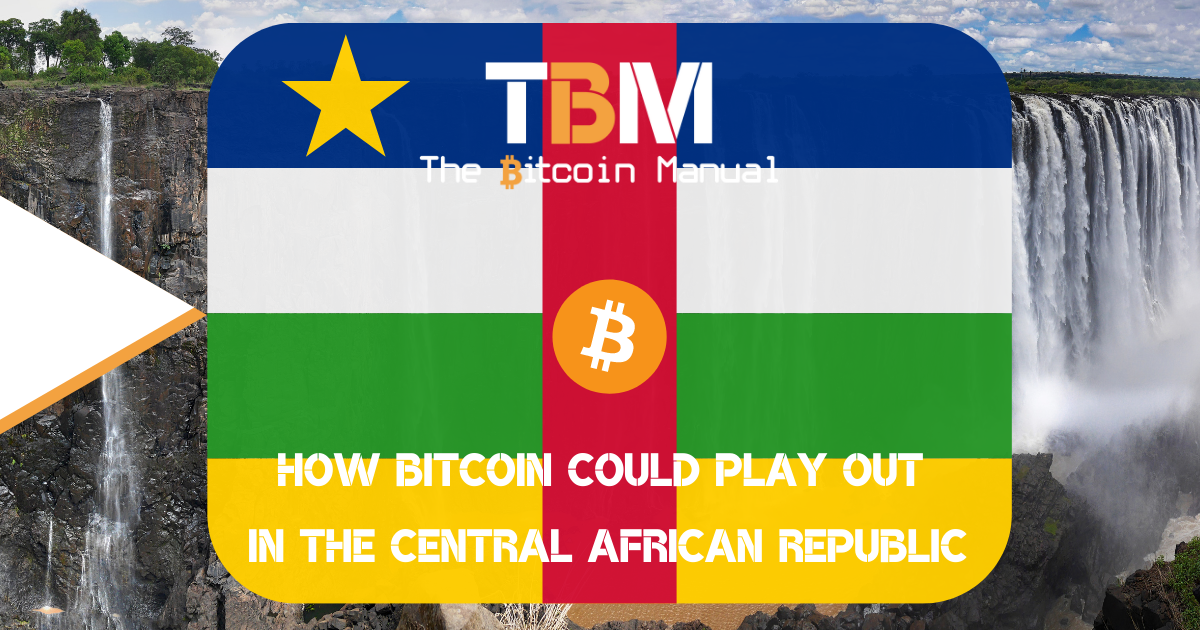 A few weeks ago, If I mentioned the Central African Republic (CAR) most bitcoiners wouldn’t be able to point it out on a map let alone know the country exists. But that all changed as the country became the first African nation to adopt bitcoin as legal tender and follow El Salvador as the second country to make bitcoin their national currency.

Despite having the bill in discussion for around a month, The announcement came out of the left field and caught the world blindsided. The Central African Republic leapfrogged regional cryptocurrency front-runners such as South Africa, Kenya, and Nigeria, countries which have growing adoption in the bitcoin space.

As of this month, Bitcoin will be considered legal tender alongside the regional Central African CFA franc, which is a currency shared with several other nations.

As you can imagine, the news came with a lot of fanfare, and while it’s a great positive sentiment, turning what’s on paper into reality and setting up a bitcoin-backed economy is an entirely different story that comes with several challenges.

Reality and limitations in the CAR

Getting the citizens of the CAR to migrate to a bitcoin standard is easier said than done, for the most part, bitcoin requires electricity and an internet connection to operate, two building blocks that are heavily lacking in the region.

The population of the Central African Republic is around 5.4 million people, of which:

Electricity access in the CAR is equally as abysmal with only 15.5% of the country having access according to the WorldBank Reports while those same reports state that roughly 71% of the CAR’s inhabitants live below the international poverty line.

In the CAR you’re not competing against other payment providers or other digital currencies, you’re competing with physical cash. CAR will need innovative solutions, such as nodes with built-in power supplies, they’ll need mesh-nets, they’ll need wallets that can broadcast via SMS and work on feature phones, bitcoin will need to be as low tech as possible if it is to reach as many people as it can.

If we consider that the ability to use bitcoin would be severely limited by the lack of electricity, internet access, smartphone penetration, and lack of education regarding bitcoin. It would be highly unlikely that many citizens would be using bitcoin in a non-custodial manner. This would defeat the purpose of one of bitcoins’ primary features which are to have no third-party risk.

If banks or fintech companies are entrusted to hold bitcoin on the behalf of citizens and governments, it allows for risks of confiscation, limitations on where funds could be spent, and even rehypothecation.

Shady ties to the bitcoin bill

CAR’s government says a bill to adopt Bitcoin was passed unanimously by the country’s parliament, reports Reuters and BBC News. (Though former CAR prime minister Martin Ziguele complained the bill was approved “by proclamation.”) While there are reports that some legislators intend to file suit against it at the Constitutional Court.

So the bill is not set in stone, and we could see it change, having the world’s eyes on the bill and the country along with all sorts of pressures from different geopolitical interests and institutions.

A break away from colonial currency

One of the popular motivations cited for the introduction of bitcoin is that CAR’s wants to use the network as an attempt to undermine the CFA franc and offer a rebuke to the country’s former colonial power, France.

Bitcoin can be a tool the country could use to retain the value that is extracted through the CFA and also build and fund local governance and provide more autonomy in the region while getting a fair price for goods, services, and resources.

A hedge against sanctions

Another possible reason for the move to bitcoin could be tied to the CAR’s close relationship with Russia. We’ve seen how the west has started to pressure nations to take sides in this recent conflict and the CAR was one of the few nations that chose to abstain from a United Nations vote condemning Russia’s invasion of Ukraine.

While the CARs government has been condemned for deploying mercenaries from Russia’s Wagner Group to fight rebels. These Russian fighters provide direct assistance to the CAR government, according to the UN.

The reason for military deployment is part of a de-escalation of tensions in the country.

Peace in The CAR since independence from France in 1960 has been few and far between and ranks 188 out of 189 countries in the UN’s Human Development Index, a benchmark of prosperity. As recent as 2013, saw the country plunged into a civil war that developed largely along sectarian lines.

The conflict eased after France intervened militarily and elections were held that were won by Touadera, although for years armed groups held sway over most of the CAR’s territory.

CAR remains a failed state, with most of its territory controlled by various rebel groups, although the government will retain key cities, including the capital, Bangui, with support from Russian mercenaries.

Rich in resources, poor in infrastructure

The CAR will provide unique challenges for bitcoin, bitcoin users, and bitcoin companies and it will take a host of expertise and resources for it to take hold in the region. The country may be poor, with a measly GDP but having such an informal economy means much of the productivity is not properly tracked and understated.

That’s not to say the CAR is some Wakanda hiding billions in wealth ready to go, but it does have a vast amount of resources that if harnessed could be a catalyst for bitcoin to flourish.

Some may consider the country’s lack of development as a negative, while others may see it as an opportunity to build infrastructure that is bitcoin-minded and bitcoin first. The country is rich in uranium, which could feed into the world’s need for energy, as well as future attempts at having smaller reactors in the country.

Much of the country’s limited electrical supply is provided by hydroelectric plants located in Boali and with an indiscriminate buyer in the region like bitcoin miners, it can help fund a more advanced hydro system.

I am still glad a country has taken the plunge, it’s a statement, it shows that it can be done, that it’s more than an idea, and is a viable option. No one likes to be the risk-taker, the first one through the door, but now that we have the poster child, the rest of the kiddies at the playground may follow sooner than later, and this announcement could speed up the timeline toward African “hyperbitcoinisation”.

As an African, I realise we’re on the wrong end of fiat failure, there is no place to hide for storing your wealth locally with any measure of certainty apart from bitcoin.

It’s one thing to acquire bitcoin, it’s another to be able to spend it and build out a circular economy, which is what I hope African countries will be a breeding ground for over the next decade.

In the same way, Africa adopted the mobile phone/smartphones network which took the continent by storm as we weren’t tied down to landline infrastructure. I hope a similar trend will emerge since we have so many unbanked and also underbanked people, we have 1 billion people who are keen to move to a superior system. A system that for the first time doesn’t favor other regions of the world over Africa.

A system where the rules are the same for everyone.

Bitcoin is taking hold in Africa, and its roots are expanding, but it’s up to every African to nurture it if we want to see it succeed and in turn, see our continent unleash the untapped value we all know remains dormant.

South African bitcoin pleb falling down the rabbit hole and willing to share every bump, scratch and knock along the way
View more articles from this author
PrevPreviousWhy Bitcoin Podcasts Aren’t The Best Way To Learn
NextWhy Low Fee Or Free Blockchain Transactions Is A LieNext