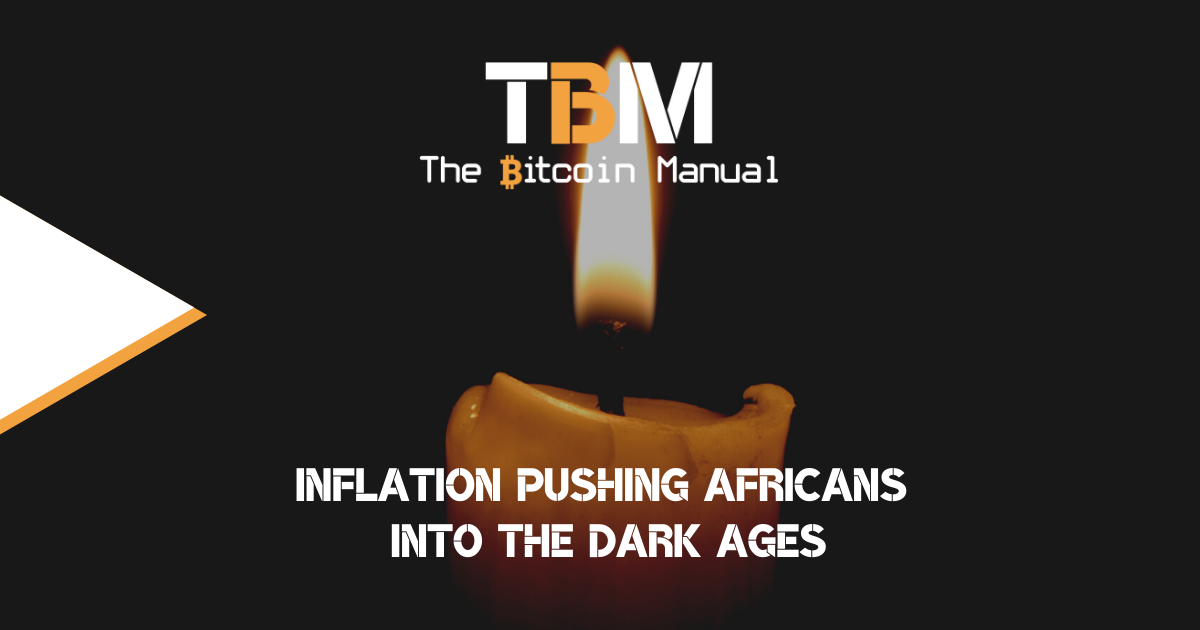 Currency inflation is a sinister creep that affects you more when you’re on the lower end of the economic ladder. Living in South Africa, I can see first-hand how it affects how people manage their lives and how others couldn’t be bothered.

If I look at those of my acquaintances firmly in the upper-middle class, their behaviour has not changed much. Their income provides a buffer to absorb the increase in prices. In addition, they are asset holders of financial tools like stocks, ETFs, index funds and real estate they own to offset the currency depreciation with nominal appreciation in asset prices.

When you measure your wealth in a particular fiat currency, if the number goes up, you feel more prosperous. You will respond in the same fashion even if the purchasing power of your cash goes down in real terms.

When I look at those who have found themselves in the longer rungs of the economic ladder, it becomes an entirely different situation. When you only have currency as a means to store wealth, the unseen hand of inflation drives your behaviour more than those that have cash as a marginal utility asset.

We are securing your energy needs.

While food prices are probably the one that is the core focus for most, and it is an issue. Food security for more people becomes a daily struggle; it is, of course, the energy that fuels us, humans. If we don’t have access to food, we quickly realise how all the things we usually worry about don’t matter.

But food is only one part of the equation; humans have become accustomed to leveraging energy. Whether it be simple combustion of a wood fire to keep you warm or cook your food. Or something more complex like hydrocarbons you require to transport yourself with a vehicle.

Modern humans cannot enjoy a good standard of living without energy. If spoken before on how currency is a human right, and so should access to energy markets. In Africa, electricity is not a given, you can be shut off at a moments notice, from 2 to 8-hour sessions per day, and you need to plan your life around it.

We know all too well what securing energy needs are about, setting up a solar geyser, having solar lamps, having an uninterrupted power supply to particular outlets, having a gas stove can all make a world of difference when you don’t have reliable electricity generation.

However, these solutions come at a cost to the individual, which not everyone can afford. So many are at the mercy of the centralised energy grid. We as citizens expend energy through labour, receive compensation in currency, which is an energy dilution and then convert that to access to electricity.

Yet, we sometimes do not get access to it, and we get less of it each year. An hours worth of labour brings you far less energy than it did 2,5 or 10 years ago.

Due to increased electricity prices and gross mismanagement of infrastructure limiting supply, I see more people having to skimp and save on how they use their electricity. We get bombarded daily with adverts that remind us to save electricity. It’s easy to say we should conserve energy, but it doesn’t tell the whole story.

An office building spending energy on additional lightning is not equal to that of a mother trying to feed her child. Energy is precious, but so is human life, and because the money allocation is rigged, so too would energy allocation.

We see people who can access an abundance of energy while others are made live on scraps.

You live in Africa, you’ve got tonnes of sun why don’t you go solar? Well, I’ve enquired about moving towards solar. It would cost around $20 000 to go off-grid. When we factor in that the average salary in South Africa is $830 a month, that’s not much to work with when pushing for energy independence. In addition, that’s the average salary, not the median salary, which is far less.

It would take you pretty much a decade to save up or pay that off to be energy independent. I’m pretty sure the maintenance cost of going off-grid would expand those costs considerably over time.

So for most South African’s, that’s an expense that’s out of reach.

If you do not have access to electricity or have limited access, your other energy alternative is natural gas. Now in modern homes, access to gas is abstracted away.

In African homes, it’s manually handed from the bottle.

As you can imagine, mishaps happen all the time, and it costs people what little they have or worse, their lives, their families lives, and even the lives of their neighbours.

Poor energy infrastructure and lack of access have a body count that very few consider.

Another large energy cost, I would say, it can be between 5 and 20% of where people spend their salary is petrol and the knock-on effects. When petrol prices increase, it not only increases the price of transport but everything that needs to be transported. Goods and services providers then need to compensate and pass on the cost to the consumer.

When petrol prices increase, it reduces your mobility be it private or public transport due to the cost. It also reduces your access to certain goods and services as you are priced out of acquiring them.

Who among us hasn’t seen their shopping cart shrink a few weeks after a petrol price hike?

Without energy, we do not have access to prosperity.

Modern society as we know it today cannot function without energy; we have become so dependant on it that even the slightest disruption can cause widespread chaos.

Even In countries like my own, where the climate is favourable, and air conditioning is still classified as a luxury. If you are without access to energy, your quality of life diminishes drastically. You cannot perform vital tasks like warming water, cooking food or travelling.

To efficiently perform a lot of the tasks we take for granted, we require energy. It makes our lives so much easier, and the more access you have to energy, the better your life becomes.

It seems counterintuitive that we would have to pay higher prices for energy in a world where we’ve got more energy creation methods than ever before. Sure we have an increase in people who need energy, but where there’s demand, a supply should naturally flow to meet it.

When you actively reduce peoples access to energy, you’re actively harming them by reducing their quality of life and pushing them back into the dark ages.

Fiat money is not tied to energy production. It’s not tied to labour productivity, so why would it optimise for either of these? We can see how it plays out as so many people lack access to energy and why their labour isn’t properly compensated because it’s not part of the labour the elite class find valuable.

Bitcoin energy usage, the elephant in the room

It may sound strange to some that I would be arguing about the cost of energy when Bitcoin has become such a large energy consumer. I can already hear you thinking, oh well, shut down the Bitcoin network, and we can have less demand for energy.

As if Bitcoin even has that big an effect on energy prices. If you’re thinking along those binary terms, then this article is not for you. For those of you who are willing to hear the argument for Bitcoin’s energy usage, I’ll lay it out for you.

Bitcoin uses energy; we get it, but what it does with that energy is more important; it leverages energy to prove ownership of a scarce asset that anyone can access. It provides the world with a free and open monetary network with a low barrier to entry regardless of where you are in the world.

The network also forces itself to become more efficient, as miners look to secure cheaper energy to drive greater profits for themselves. The need for extra energy also means more supply is unlocked, such as stranded or wasted energy making the worlds energy markets more efficient.

Bitcoin acts as an energy buyer of last resort and then allows us to tap into that stored energy in the future, at any time and anywhere in the world instantaneously.

Bitcoin is created through the expenditure of energy with the sole purpose of securing your energy and time in the time-chain. It’s there to protect and preserve your purchasing power through time and space and requires a growing amount of energy to do so.

I think everyone would agree that no cost should be spared for the protection of your life’s work.

While fiat continues to push African nations back into the dark ages, Bitcoin allows Africans to leverage the world’s energy production to store their spare energy and productivity. Bitcoin actively recruits the cheapest energy in the world and allows you to store any amount of value in its network long term.

As Bitcoin appreciates purchasing power, African’s can then extract that energy stored in Bitcoin. Africans can use it to build new means of energy, supplement the grid, create more energy independence, build more robust access to energy and leverage the labour and talent on the continent.

Bitcoin converts the worlds cheapest energy and creates an incentive to create more supplies of energy. The more energy supply we have, the more we lift people out of poverty and create more value in all parts of the world.

Bitcoin allows us to share energy abundance with the world.

South African bitcoin pleb falling down the rabbit hole and willing to share every bump, scratch and knock along the way
View more articles from this author
PrevPreviousWhat Would Happen If Satoshi Nakamoto Sold All His Bitcoin?
NextWhen Does Bitcoin’s Market Close?Next