What Would Happen If Satoshi Nakamoto Sold All His Bitcoin?

Home » Articles » What Would Happen If Satoshi Nakamoto Sold All His Bitcoin? 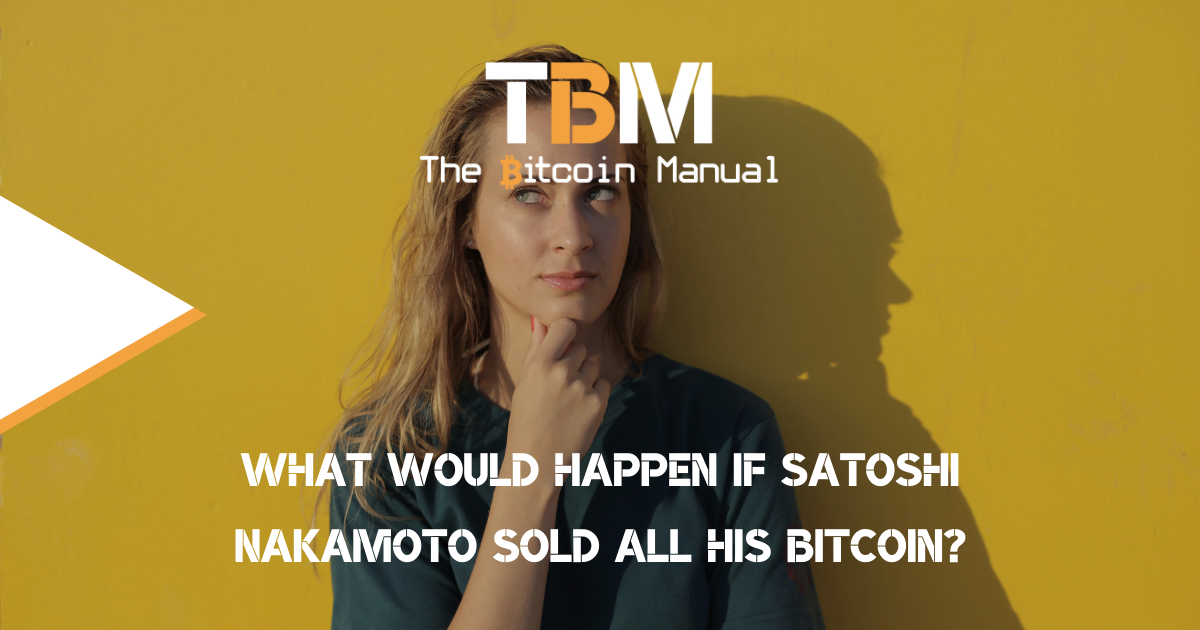 This question pops up from time to time and I had a conversation with someone at a conference recently who critiqued the amount of BTC that Satoshi Nakamoto has. Currently, blockchain analysts reckon that there’s over 1 million Bitcoin in Satoshi’s wallet which is a substantial amount!

However, this has been laying dormant for over a decade and many believe that it won’t move but it has caused a stir amongst a few shitcoiners and those who are just learning about Bitcoin.

With the proof-of-work protocol that Bitcoin uses, the size of your Bitcoin wallet doesn’t mean you can dictate changes to the underlying monetary system.

This is because there is a large network of nodes that verify the whole transaction history to ensure no double spend has happened before or after every transaction.

Once those nodes have verified these transactions are legitimate, then there’s an army of miners across the world that process those transactions and permanently etch them on to the blockchain every 10 minutes.

Finally, for any changes or upgrades, over 90% of the miners and nodes need to approve the changes.

As you can see from all of this, it actually doesn’t matter if someone has a Bitcoin wallet with 1 sat in or over a million BTC – they can’t change the protocol based on how many Bitcoins they have as there isn’t a centralised point of control.

Contrast the proof-of-work protocol of Bitcoin against the proof-of stake of almost all of these alt coins and you might see what we came to realise at TBM.

With proof-of-stake, the more of that token you have (your stake), the more influence you have on the underlying monetary system.

In some cases, the maximum supply of a token isn’t known. Others, the monetary policy changes more times than the UK’s weather. The rest of the projects start burning their tokens because no-one wants to buy them, creating an artificial demand.

Now you may be thinking, “why don’t you just buy more of the token to have a say in the network?”

Well, the issue I have is that a lot of these tokens/projects will have had some pre-token issuance behind closed doors to the dev team or insiders that then have an overwhelming control over the network.

That doesn’t sit well with me as they can literally change anything, rug pull, shut down the project, ghost and that’s the end of that.

Why would you want to spend your hard earned money buying up so many tokens to “have a say” just so you boost up the project’s founders self-issued token value, only for them to dump on you and you’re left with nothing?

The price of Bitcoin is always the first thing anyone looks at, thinking it’s out of reach, which is likely where the unit bias of having “1 of a shitcoin” takes you.

We’ve all heard of the sudden price crashes that occur but if Satoshi just decided to dump his whole stack at once, would it actually collapse the price to $0?

Let’s work it out.

Even if there was enough liquidity (buy orders) to absorb a 1 million Bitcoin insta-dump, Satoshi’s stack is only 5% of the total market cap of Bitcoin.

So really, his stack is not going to affect Bitcoin’s price that much. I’d argue that over-leveraged traders that gamble with their Bitcoin on exchanges affect the price more with those sudden price wicks than Satoshi’s stack would.

The sentiment around the pseudonymous creator and the aura of mystery would likely change if their identity would ever be revealed.

Would sentiment change around Bitcoin though?

I am not so sure about that either. For nearly 13 years, Bitcoin’s money system has remained unchanged and that will hopefully be the case forever more. This brings comfort to many in an uncertain world.

If that 1 million Bitcoin did somehow end up getting dumped on exchanges, then an extra million Bitcoin suddenly becomes available to everyone until they all get bought up.

No doubt there would be a lot of FUD going around as mainstream media and the whales will have a field day with emotions should Satoshi sell up.

If Satoshi would end up selling all his Bitcoin, I’d imagine there’d be plenty of takers! Ultimately, Bitcoin has kept going despite Satoshi’s last communication in 2011 so I’m sure everything will be just fine. I know I will be anyway.