How Many Satoshis Is 1 of My Fiat Currency Worth 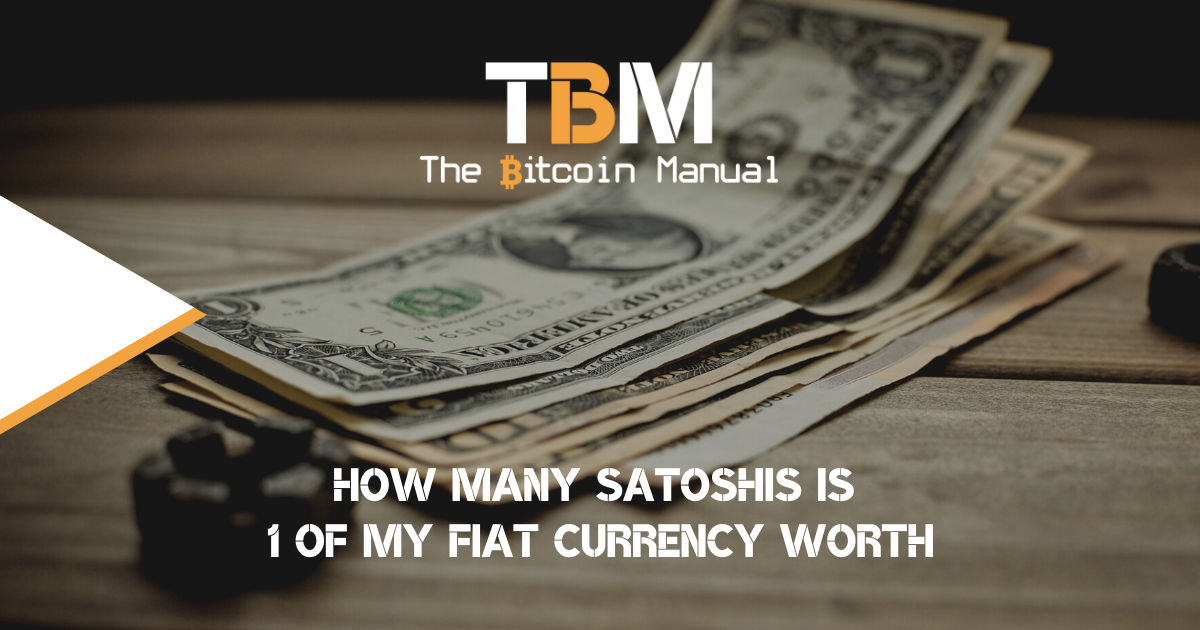 When the term Bitcoin is mentioned in passing conversation, the discussion is more or less centred around the price of 1 Bitcoin in US dollars or your preffered local fiat currency. Sadly the conversion often ends there, a surface-level engagement that doesn’t dig into the meaning of this price appreciation and the downstream ramifications.

I think it’s safe to say that at $60 000, 1 Bitcoin is officially priced out of the range of the average person in most countries. Who the hell has $60 000 worth of cash to spare to purchase 1 Bitcoin? The higher the price moves, the more people it prices out.

It seems we’re only up to the millionaires, institutions and governments to accumulate on the whole coin level, but don’t despair.

That is not the point of Bitcoin.

Sure, if you can stack a large amount of Bitcoin, you’re probably patting yourself on the back, but we’re still in the adoption phase, and price appreciation isn’t going to stop anytime soon.

As Bitcoin continues to increase in price, so too does its various units, namely the Satoshi. Since there are 100 million Satoshis in 1 Bitcoin, there’s more than enough to go around for everyone on the planet.

What is a satoshi worth today?

Since each sovereign currency has a different size in market cap and different amount in circulation, they all square off to Bitcoin in different terms. At current rates, the Kuwaiti Dinar has the strongest 1 unit to satoshi exchange rate but has a pretty inconsequential market cap.

You can review the different currencies as they relate to Bitcoin in the table below.

Note: Feel free to visit their site and if you find the site useful you can donate to them using the wallet address found at the bottom of the site.

As currencies continue to lose value in Bitcoin terms, so too does the Satoshi become a superior unit of account. If 1 unit of your local currency secures 100 sats, that means 1 cent in your currency is one Satoshi. If we have a look at the table above, over 40 countries are already falling within this range.

If 1 unit of your local currency gets you one sat, that means you’ve achieved satoshi unit parity. Surprisingly there are already 19 currencies that have hit this range of Satoshi to currency unit parity.

This means that the Satoshi is a better unit of account than their local currency because goods and services can be priced in it without much of a difference in the unit price.

Of course, Bitcoin is still volatile, so pricing goods in sats can be tough for now, but as the market cap increases, the velocity decreases. Eventually, Bitcoin will hold certain ranges and can be a unit of account you can settle purchases in without much regret or miscalculation.

Since we use the US dollar as the benchmark for international settlements lets, look at what it would take for Bitocin to match it in size. To get it to dollar cent to Satoshi parity would require Bitcoin to reach a price of $1 million. If we are looking at one satoshi to 1 USD dollar, we would need a Bitcoin price of $10 million per Bitcoin.

That gives Bitcoin a long way to go before it can compete with the G7 currency dominance. It’s probably why developed nations still have the luxury to debate the merits of Bitcoin. They still have time before they are flipped.

As for those of us who use emerging market currencies that suffer under the weight of the increasing size of the US Dollar, Bitcoin gives us a chance to migrate that value out of the system.

Following the purchasing power increase of satoshis in currencies around the world can give us a measuring stick of the relative strength of each country, their growth/productivity and the implementation of their monetary policy.

A look at El Savlador

El Salvador recently put into law Bitcoin as a legal currency, and since then, their local currency BTC has grown in relative strength to their neighbouring countries currencies. As other central and Latin American countries sovereign currency lose purchasing power, the satoshis they own increase in purchasing power. This allows them to secure cheaper imports and drive more productivity and abundance for the country.

If this trend is to continue, it would be seen as unnecessary pain to not adopt a Bitcoin standard, especially if you’re one of the lower end currencies.

Satoshi strength could be a lagging indicator of adoption.

As currencies fall below satoshi cent or satoshi unit parity, it only encourages more people to adopt it as a unit of account and method of saving. Sure, people could opt for other fiat currencies like the US dollar, but that would require easier rails to access these currencies locally.

Since Bitcoin is already borderless, stateless, and an open monetary system, the ability to access this network is far easier with less need for infrastructures like banks or regulation.

Bitcoins low barrier to entry makes it the rational option for anyone who sees their local currency continue to fail as a way of conducting economic transactions.

South African bitcoin pleb falling down the rabbit hole and willing to share every bump, scratch and knock along the way
View more articles from this author
PrevPreviousDoes The Dollar Milkshake Theory Delay Hyperbitcoinisation?
NextWhat Would Happen If Satoshi Nakamoto Sold All His Bitcoin?Next