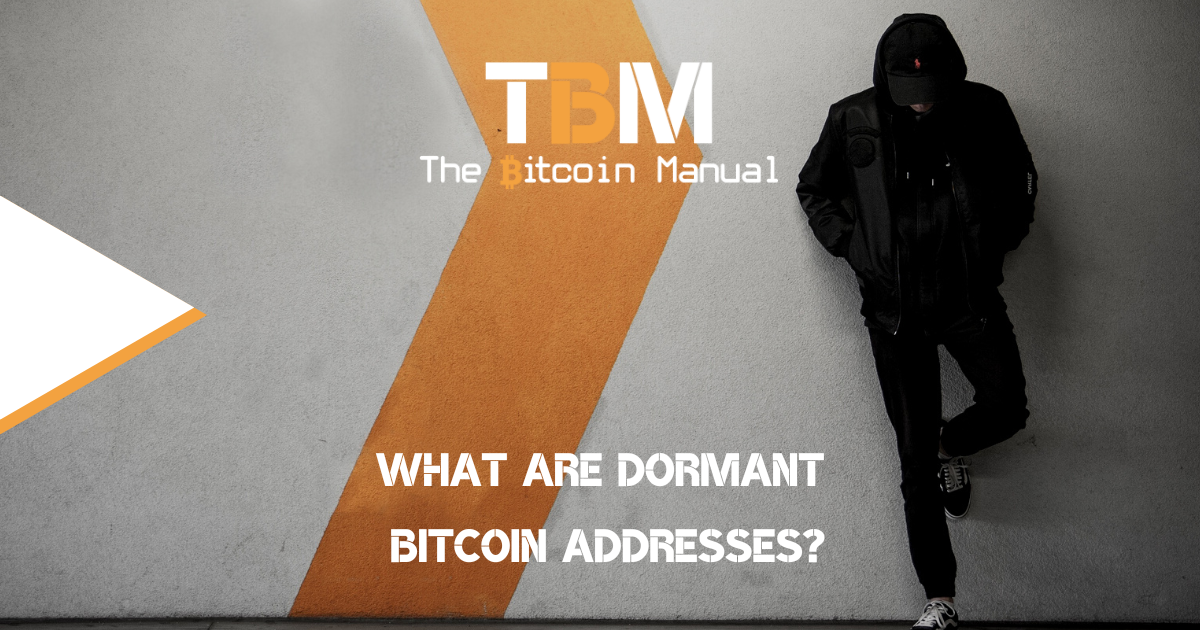 The ability for anyone to verify a network, its holdings and where bitcoin is moving and at what price would naturally attract the curious data analyst. Today we have on-chain analysis and chain analysis firms, all drawing data from the chain to either provide updates on the so-called “health” or “growth” of the network or, more sinisterly, trying to de-anonymise the network’s base of users.

Now that the bitcoin to fiat market is worth billions, the interest in watching these addresses increases since one dormant address holding a considerable amount of coins could move the price should that user decide to sell.

Today there are bitcoin wallets containing billions of dollars worth of BTC simply hanging around with no intention of moving/ For one reason or another; the wallet has not transacted for years despite having what is considered life-changing money.

These addresses are often referred to as dormant addresses.

What is considered a dormant bitcoin address?

A dormant Bitcoin address refers to addresses with no outgoing transactions for a certain period with a non-zero balance. Depending on the time frame you prefer, an inactive address could be considered dormant if no funds have moved in or out of that address for one year or more.

Someone holding bitcoin for one year might only be getting into the feel of it; they might be planning to hold it for a cycle to sell at the top, so considering these dormant seems like a stretch, in my opinion. I prefer to look at addresses that have been held through multiple cycles and consider them dormant.

If you’re immune to price drops and rises in bitcoin over any cycle, you’re either a holder, dead or in jail.

Below is a graph of dormant addresses and the amount of bitcoin held on the chain by these addresses for nine years.

Now that we know what dormant addresses are and how to identify them let’s take a look at some of the reasons why addresses go quiet.

Some of the big wallets are from the early eras of bitcoin; they could have mined those coins or purchased them through P2P traders or the early exchange days and happened to hold onto them somehow.

Early holders who invested in the asset and maintained their stakes have evolved into bitcoin whales, and those who are alive to spend that money have either started companies to further the growth in the space or they’ve gone off to enjoy early retirement; who knows?

During the last few cycles, a growing cohort of bitcoin maximalists have emerged; they simply dollar cost average and acquire bitcoin and plan to store it for the long term. These hodlers hold their bitcoin on-chain, they are the sole owner of the keys, and since they have no plans to spend the bitcoin, those wallets don’t see much action.

I don’t think this one needs much explanation, users who have lost their keys or failed to back them up while alive or dead lose access to those coins forever. If that private key is never recovered, those coins will remain lost and can never be moved.

Certain financial transactions involving bitcoin could be considered illegal by governments and law enforcement, and in these cases, coins can be seized. Some coins could be used as evidence in court cases that could take years and thus remain dormant until the governments holding them finally do decide to do something with them, like auctioning them off.

Stolen coins are mainly due to incidents like hacking accounts, but some could be from physical attacks, where someone has broken into your home and taken your private keys or forced you to hand them over. Once these addresses have been reported to authorities, the holder knows they’re constantly under watch, and some tend to leave the addresses dormant in a bid to avoid investigations.

It is worth noting that in recent years, despite the anonymity of bitcoin, investigators have managed to trace stolen funds by tracking their movements from one address to another. Stolen coins could eventually become active again if the holder thinks they have a way to liquidate some of the bitcoin without it being tied to them or if authorities do track them down and move the bitcoin from that set of keys to another set of keys.

Now that we have second-layer solutions like the Lightning Network and Liquid Network, on-chain bitcoin doesn’t always have to move to facilitate transactions. Certain bitcoin addresses could be holding bitcoin for a while, even years, but in the meantime, they’re zipping around on other networks paying users and facilitating transactions.

The growth of second-layer solutions is one of the reasons why I don’t think a one-year-old address could be considered a dormant address.

Again, the emergence of new bitcoin use cases means the dormant address length becomes a concern. We have a growing market of users willing to lock up their bitcoin in multi-sig addresses and use that as collateral to secure a loan. The bitcoin does not move until the loan is repaid with the agreed interest.

Generally, bitcoin-backed loans run for 1 – 2 years, so while those funds might be seen as dormant, they are actively backing an agreement with different parties.

Don’t turn your wallet into an eye-catching address

If, after reading this, you’re thinking I hold my bitcoin on-chain and my public address isn’t doing jack, wouldn’t they be watching me? The short answer is yes; your funds are being considered dormant regardless of the size of the funds in the public address.

As a responsible bitcoin holder, your job is not to consolidate your bitcoin in one public address, or one day you’re moving; your coins could be flagged by individuals or bots watching the chain and applying certain rule sets.

Instead, create a new public key from your seed phrase each time you withdraw on-chain, and while each address might eventually be considered a dormant address, you would never be in danger of seeing your coins watched by others as it moves to an exchange to be sold off.

South African bitcoin pleb falling down the rabbit hole and willing to share every bump, scratch and knock along the way
View more articles from this author
PrevPreviousHow Altcoin Exchanges Carry Liquidity Risk
NextWhat Is A Point Time Lock Contract?Next