Home » Articles » Why Is Bitcoin Mining So Loud? 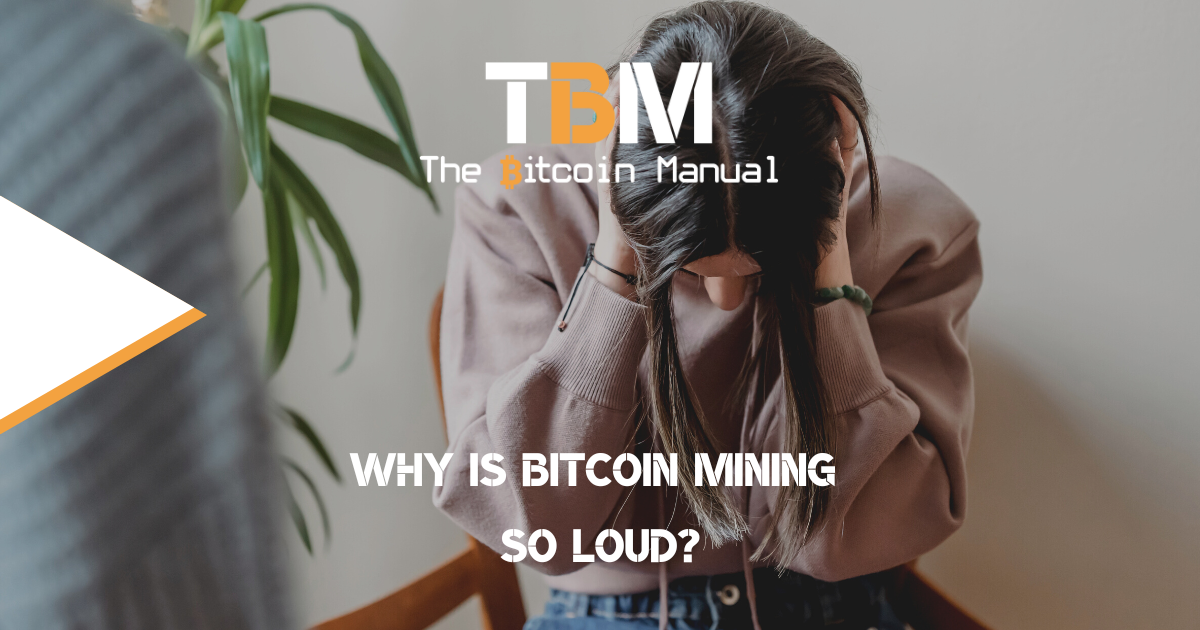 Bitcoin mining gets a lot of flack from the general public; if it’s not using too much energy, it’s driving up the price of computer chips. If it’s not generating useless computation that cannot be used for anything else, it’s making too much noise. Bitcoin miners provide computing power to the network in a globally competitive race, hashing out calculations all day-all night to ensure the integrity of the network and maintain the addition of new blocks to the chain.

The constant narrative attacks on bitcoin mining are directed at a core tenant of bitcoin, the proof of work algorithm that underpins the entire network. To remove proof of work is to neuter the bitcoin value proposition, so arguing for a stop to mining or a move to proof of stake is a non-starter.

Those that critique bitcoin mining, feel free to propose an alternative solution that allows us to have a globally decentralised network that provides a reliable method of transferring value with near flawless uptime and provides you with uncensorable transactions.

If you can’t, you have to accept that bitcoin mining is here to stay and that certain trade-offs need to be made in the short term. Yes, there will be issues with bitcoin mining as it matures, but that’s why there is a growing industry around it dedicated to solving these problems.

Why is bitcoin mining so noisy?

To the uninitiated, bitcoin mining solves extremely complex computational math problems using complex computers, so does it make so much noise? Aren’t laptops and desktops running as quietly as can be these days?

Yes, personal computers have become dramatically quiet after the years, but you’re not exactly pushing those devices to the maximum, bar some who do video editing. Your email client and web browsing are not exactly going to push your device over the edge.

In case you’ve ever used a gaming laptop or a CPU, you would know in extreme loads, the GPU and the CPU would tend to get hot, forcing the fans in the chassis to spin at full speed, trying to dissipate as much heat as possible.

That process gets pretty loud, in case you’re in a room alone.

In bitcoin, however, you want to push the device as hard as possible. The goal of the computer is to find a solution to the problem. When one computer finds the solution, it is awarded a block subsidy of bitcoin along with the transaction, and the process continues. It’s a race against time that repeats roughly every ten minutes, so you must push out as many computations as possible in the hope of making a profit.

To push out more computation, the computer needs to process faster, drawing electricity and generating heat in the process. The heat could fry circuits if not properly cooled, and this is where the majority of the noise comes from, the cooling fans spinning at top speeds to provide enough cool air to the various parts inside the mining machine to keep it cool.

Bitcoin mining has long since left the personal computer space. Today, the hardware required to run this mining setup is specialised to do one thing, and that’s mine bitcoin — it requires an application-specific integrated circuit (ASIC) for setting up a mining rig. In these rigs, anything superfluous to mining is stripped out and only what is needed to generate hash power computation is kept and optimised.

A typical ASIC’s noise levels range between 50 DB and 75 DB; by comparison, the noise level is similar to a food blender or a loud vacuum. To give you an idea of how loud a bitcoin miner can be, check out the video below.

This is only a single stand-alone miner, and as you can imagine hearing the sound of a blender or vacuum 24/7 in your home or emanating from your neighbour’s place is going to drive you nuts.

Now take that sound and multiply it when it comes to mining facilities with hundreds or thousands of such computers running calculations and consuming a ton of processing power, so it is not surprising that the whining fan noise would amplify too and reach even further distances and as a result, annoy large swaths of people.

The noise complaints are rolling in.

Industrial-level bitcoin mining operations often co-locate close to an energy source to secure preferred rates of power or access and keep those operational costs as low as possible. In some cases, those locations are close to residential areas, and as you can imagine, once you bring noise into a neighbourhood, you will get complaints.

In Murphy, North Carolina, close to the foot of Poor House Mountain PrimeBlock, set up a mining facility that neighbours claim sounds like you’re living on top of Niagara Falls.

The city of Sherbrooke, Quebec, 100 miles east of Montreal, saw Bitfarms spin up a mining operation. The 500 people who neighbour the company’s computer centre have been complaining about an “inescapable drone” driving them crazy.

In Limestone, Tennessee, Red Dog Technologies have set up a mining operation that has clashed with the surrounding area as residents complain about a noise sounding like a jet engine idling on a nearby tarmac.

Noise is a factor miners have to consider when setting up operations and expanding operations; they need to choose areas where they will not affect the general population or limit the size of their operation and break ground somewhere else should they wish to expand.

The need to limit noise or, rather, the effects it encourages miners to spread out, and that means there is a limit to your growth and is a smaller consideration that keeps competition for mining from becoming centralised.

What can be done about the noise?

Contrary to popular belief, bitcoin miners aren’t fond of the sound either; even if it’s your business, place of employment, or home mining, the sound is equally as annoying. Certain miners have learned to live with noise pollution, while others are taking steps to reduce its effects.

If you’re a home miner with a few mining rigs and don’t want to annoy the closest neighbours with mining noise, then prefabricated noise-dampening enclosures are your best bet. Tools like the Black Box from Upstream Data make it an easy plug-and-play solution if you don’t want to build one yourself.

This fire-and-weather-resistant enclosure cuts a machine’s noise level in half.

Not a fan of the standard fans

Some bitcoin miners have looked to improve their rigs by using smaller fans; German-made fans have been used to replace the Chinese-made ones it had originally used in the factory.

Chimneys aren’t only for Santa.

Some companies have also built chimneys that funnelled the sound up and out through the roof of the building instead of through vents in the walls.

Other mining operations have resorted to building walls, some as high as 20 feet, to act as a sound barrier between the mine and the local areas.

Other mining facilities make use of industrial cooling/ventilation solutions to dissipate the warmth and help the systems to run at optimal temperatures, as if the temperatures get higher than usual, it would result in thermal throttling, causing the system to drop performance in an attempt to prevent it from overheating.

Immersion cooling is another technique for reducing noise and heat. Instead of high-velocity fans, miners can remove the fans, submerge the hardware in dielectric fluid, and the noise disappears.

Do you invest in bitcoin mining? Are you considering bitcoin mining? Have you been mining for some time? How do you deal with the noise? Let us know in the comments down below.