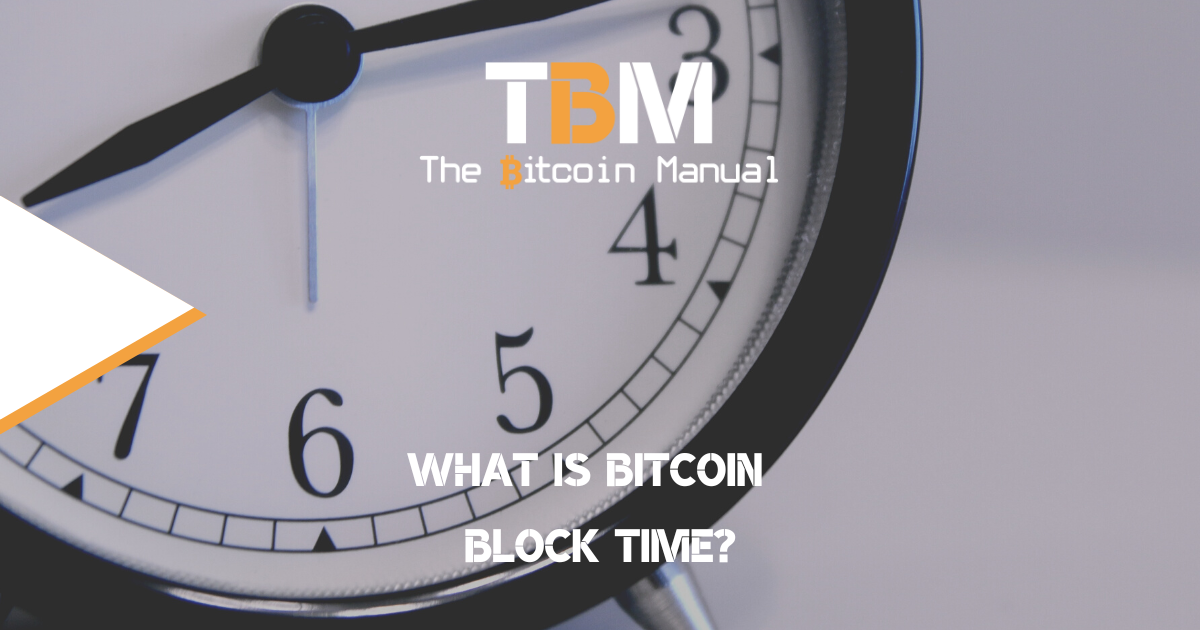 A transaction can only occur once a block containing the transaction data has been generated and the network approves that the block in question meets consensus rules.

The time needed to create this new block is called block time.

What is block time?

Block time is the measure of the time it takes the miners within a network to verify transactions within one block and produce a new block in that blockchain. Once a second block is added, the previous block has a greater degree of security that it cannot be rolled back, and this is called a confirmation.

The block time on the bitcoin blockchain is roughly 10 minutes, or rather the network tries to reach a confirmation within that time frame. If all is running smoothly, then every 10 minutes, a new block of transactions is added to the blockchain, and transactions within the block are considered to be ‘processed’.

However, this block time isn’t set in stone and can oscillate between a few seconds and a few days.

How does block time work?

Satoshi specifically chose ten minutes as a tradeoff between the first confirmation time and the amount of work wasted due to chain splits. After a block is mined, it takes time for other miners to find out about it, and until then, they are competing against the new block instead of adding to it.

The longest-ever wait between bitcoin blocks was between the genesis block (the first block on the bitcoin blockchain) and block 1; a massive five days, 8 hours and 32 minutes. This extended wait was due to limited computational power on the network since Satoshi was the only miner, and the challenge of long delays between blocks continued throughout bitcoin’s first year.

However, since this initial teething period, the daily average wait time has stabilised, with the most recent record being just 122 minutes for block 679,786 to be mined. The block time is in a constant state of adjustment to match the changing difficulty and hash rate coming on or falling off the network, and you can see how it tries to maintain a balance in the chart below.

What does mining difficulty have to do with block time?

A consistent factor that affects how long it takes to mine one Bitcoin is what is referred to as the network’s hashing difficulty algorithm, which is designed to self-adjust to maintain a consistent 10-minute block verification time.

Mining bitcoin is an “all or nothing” affair — miners receive their bitcoin reward every 10 minutes while the losing miners receive 0. Mining is structured as a race between miners, who compete to solve computationally intensive puzzles and become the first on the network to validate a new block and pocket the reward successfully.

Since competition for bitcoin is constantly in flux, with new miners coming on and older miners falling off, the network has to readjust the difficulty of finding a block based on the amount of computing power available. Since the difficulty adjustment takes a while to kick in, blocks can be mined faster or slower on some days until the network rebalances itself, and that’s why block time can remain in a state of flux.

Why is a block time roughly 10 minutes?

The reason for the block time is to give the network time to catch up and ensure the nodes and miners can remain in consensus; the longer time between blocks, the easier it is for a decentralised network to remain synchronised.

While we may be used to the feeling of instant transactions and think these 10 minutes seem antiquated, the truth is none of our fiat transactions has a final settlement. When a transaction is made, counterparties agree to credit one another in that instant and settle at a later date. In bitcoin, you’re getting the final settlement and 10 minutes to 1 hour to have full control over spendable funds isn’t too bad.

Another factor that encourages longer block times, and handles limit disputes, while not a common occurrence there are instances where two miners could secure a block and the network will have to decide which block they pick as the next addition and avoid a chain split.

The other factor is the block time, the target interval, which, as we’ve mentioned, isn’t 10 minutes on the money every time. It reduces the average confirmation time at some points and makes them longer at other times to compensate and average out.

How to get around block time limitations?

If you don’t want to live your life 10 minutes at a time, there are ways around the base chain block time in confirming a transaction.

The first option would be to move your funds or keep funds on second-layer networks like Liquid which offers users 1-minute block times, or Lightning which offers channel owners instant transfer of funds as balances are updated and managed off-chain.

If the bitcoin economy continues to grow, block space will become an issue, and as a result, block times might have spells where it is far too long to complete certain transactions. If scaling solutions do not expand to compensate, certain businesses might have to build reputations based on “trusted addresses” to fill the need for instant acceptance without confirmation. Such services could be provided by major corporations who can sign a PSBT, or they’ve re-used an address, and it has a history.

In addition, those addresses could be backed by insurance against fraud (for a small per-transaction fee) and be willing to conduct transactions with 0-confirm transactions.

Another proposal to get around the need for a confirmation on the blockchain is a covenant; this would be a special bitcoin transaction with additional rules placed on it. Even if the transaction is not confirmed within the block, the covenant can be enforced while it remains in the mempool, which reduces the need for a block confirmation for two parties to agree on a transfer of funds.