How Much Bitcoin Will My Miner Make?

Home » Articles » How Much Bitcoin Will My Miner Make? 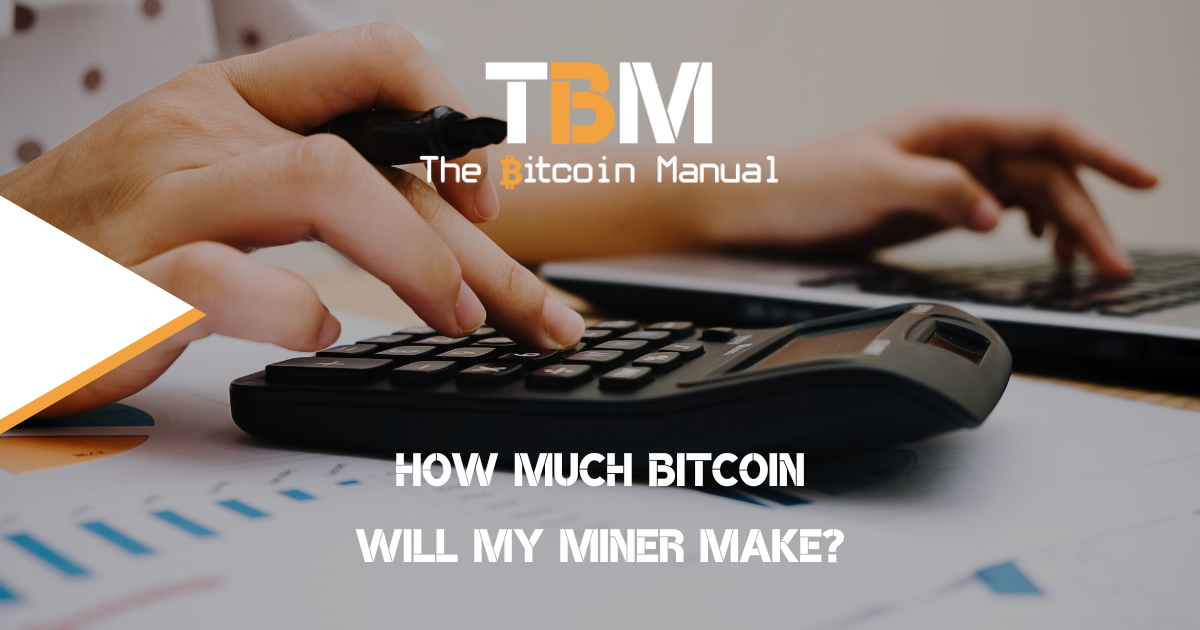 Bitcoin mining has grown into big business as it becomes more popular now people are seeing past the FUD. Whether its energy companies looking to balance their grid or plebs wanting to secure the network and earn some sats for doing so.

Mining is one of the key parts of Bitcoin as highly specialised computers, called ASICS, batch together transactions from various users across the network and permanently etch them in to the history of the blockchain.

As a result of successfully adding one of these batches of transactions, called blocks, to the blockchain, miners receive a reward in Bitcoin to pay for the energy used as part of this proof of work, as well as any transaction fees.

With the block reward being slashed in half every 4 years approximately (or every 210,000 blocks), you can start to see why so many companies are keen to set up various mining farms as soon as possible, using excess or even waste energy to keep running costs low.

However, for the humble pleb looking to add to their stack, calculating how many sats you can get from a specific miner is important before you start jumping in.

Some of those I’ve spoken to that mine Bitcoin consider mining as a way to “dollar cost average“, with the added advantage of acquiring non-KYC Bitcoin, where the cost of running the miner is effectively your “buying price”.

There are of course some considerations when deciding if you want to get in to the mining game or if you just want to buy Bitcoin and move it to cold storage for the long term.

Here are some things to think about to get you started if you’re planning on home mining but there might be other factors that pop up as well:

There are other services such as cloud mining and hosted mining, each with their pros and cons but they should tell you what hash rate, power and costs are of the miner you have bought so you can run calculations.

If you’re happy you have the basics covered for mining, then you can use this handy tool to calculate whether your miner will help get you to your Bitcoin goals.

CoinWarz is an online Bitcoin mining calculator that has been running since May 2013 to specifically help people work out the profitability of their miners. The main requirements to use the calculator are:

Once you input these, the calculator will give you a fairly accurate figures for your daily mining revenue, mining fees, electricity costs, how much BTC mined per hour and per day.

It automatically uses the current Bitcoin difficulty so you have live information of your miner’s performance.

For example, a Bitmain Antminer S19 XP miner with a hash rate of 140TH/s, 3,010 Watts of power consumption and electricity costs of 5 cents per kWH will give you something like the screenshot below:

As humble plebs looking to escape the current monetary system, we’re not too interested in that filthy fiat value in green, rather the amount of Bitcoin we will get.

However, if you are interested, the website does breakdown the return of investment values and how long it will take the miner to mine one whole Bitcoin if all else remains equal.

This is a personal choice so it really depends on what is most important to you. If you want to secure non-KYC Bitcoin then buying a miner and setting up a cheap home mining system that you can sustain would be the way to go.

The other things to factor in if you want to make sure you’re getting the most sats for your buck will mainly depend on these things:

The Bitcoin difficulty changes approximately every two weeks to keep up with, approximately, 10 minute block times. So if more miners come online, the difficulty increases, reducing the amount of sats that your miner will get and vice versa if miners go offline.

The fiat price of Bitcoin can help determine if you just decide to buy Bitcoin outright instead of mining it. If the price drops below a certain threshold, you may get less sats through mining compared to just buying and the opposite is true if Bitcoin price increases.

Costs of running the miner may increase with older miners and, especially in the current climate, electricity prices are rising rapidly. So if you can find cheap, or make your own, energy to power the miner, it will be more profitable to mine.

The hash power of the miner won’t change but it’s important to consider when buying, given that you’ll probably be keeping this miner for at least one halving cycle, if you can keep it running!

Of course, it’s up to you what you want to do and switching the miner off is always an option should you need to for whatever reason. There’s more than one way to skin a sat, mining is just one of many 😉

British bitcoin pleb falling down the rabbit hole and willing to share every bump, scratch and knock along the way
View more articles from this author
PrevPreviousHow To Buy Bitcoin With PayPal
NextHow To Speed Up A Bitcoin TransactionNext