Home » Articles » What Is A Bitcoin Block Subsidy? 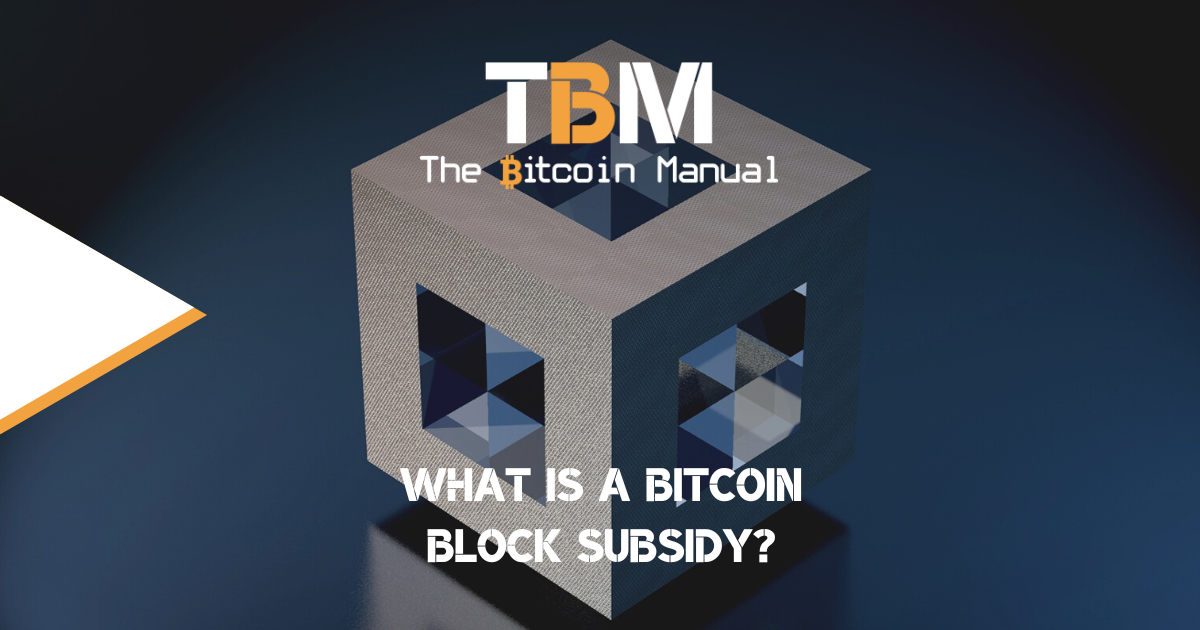 Bitcoin is a multi-facetted system that requires mass coordination from thousands of people worldwide, from those running nodes who enforce the rules and monitor the blockchain to ensure transactions and miners remain in consensus and follow the rules. To miners who provide more computing power to secure the network and exhaust energy to ensure the integrity of every new block added to the chain.

If you’ve heard about bitcoin, then you’ve probably heard about the concept of mining, mining in simple terms is the way bitcoin secures new transactions in its ever-growing ledger. As a reward for providing that computation power, miners get paid out in bitcoin.

But where does this bitcoin come from?

What is considered a successful bitcoin block?

To create a new block, miners collect transactions from the mempool and add it to a block; once they’ve filled their block must go through a process to solve a math problem faster than any other miner. When finding a valid solution for the network, a new block will be added to the blockchain by consensus of the nodes.

The miner who finds the solution and adds a new block to the chain will receive a reward for the new block, which contains the block subsidy.

What is a block subsidy?

How is the block subsidy decided?

This amount is strictly determined by an algorithm in Bitcoin’s source code: the subsidy started at 50 BTC per block and is cut in half every 210,000 blocks or roughly four years.

Why does bitcoin need a block subsidy?

This special transaction is the first transaction in every block, and it has no inputs. The output of a coinbase transaction cannot be spent for 100 blocks, so miners can only spend their block subsidy after a 100-block cooldown.

Each block contains many transactions, each with fees attached to incentivise their confirmation. Since the block subsidy falls by half every four years; transaction fees will slowly begin to make up most and then all of the block reward to encourage miners to keep providing hash rate to the network.

When is the block subsidy issued?

Roughly every 10 minutes a block is mined, and once it’s mined, the miner is rewarded newly generated coins are created by a special kind of transaction called coinbase transaction. Typically, the coinbase transaction is the first transaction to be added to a block, and it generates coins out of nothing because the coins come from a single blank input. These coins can also be called virgin bitcoin as they have no transaction history.

How much is the bitcoin block subsidy?

In the case of Bitcoin, the block subsidy started at 50 BTC and is being reduced in half every 210,000 blocks (approximately once every four years). Such a process is known as Bitcoin halving. Bitcoin’s block subsidy was reduced to 25 BTC in 2012 and to 12.5 BTC in 2016. The last halving is expected to occur in May 2020, and the next halving should be around 2024.

Is the block subsidy inflationary?

Yes, the bitcoin block subsidy is inflationary as it adds new stock of bitcoin to the current circulating supply; some of that supply is sold by miners on the open market to either realise profits in a bull market or to pay for runway and cover current expenses. Bitcoin miners like hodlers have an incentive to hold on to bitcoin as long as possible, so despite all the new bitcoin being mined, not all new coins will hit the market at one time.

All bitcoin participants know how much bitcoin is being mined each day and what the total cap of bitcoin will be at all times.

Additionally, bitcoin goes through a “halving” roughly every four years or 210,000 blocks which are disinflationary. This means the block reward given to miners systematically halves over their lifespan. Since the last halving in May 2020, successful miners have received 6.25 BTC for each block discovered, which usually takes approximately 10 minutes and is set to be cut in half once again come the next halving schedule.

South African bitcoin pleb falling down the rabbit hole and willing to share every bump, scratch and knock along the way
View more articles from this author
PrevPreviousBitcoin App: Keet
NextWhat Is Kollider Pay?Next