Home » Articles » Why Is Bitcoin Mining So Energy Intensive? 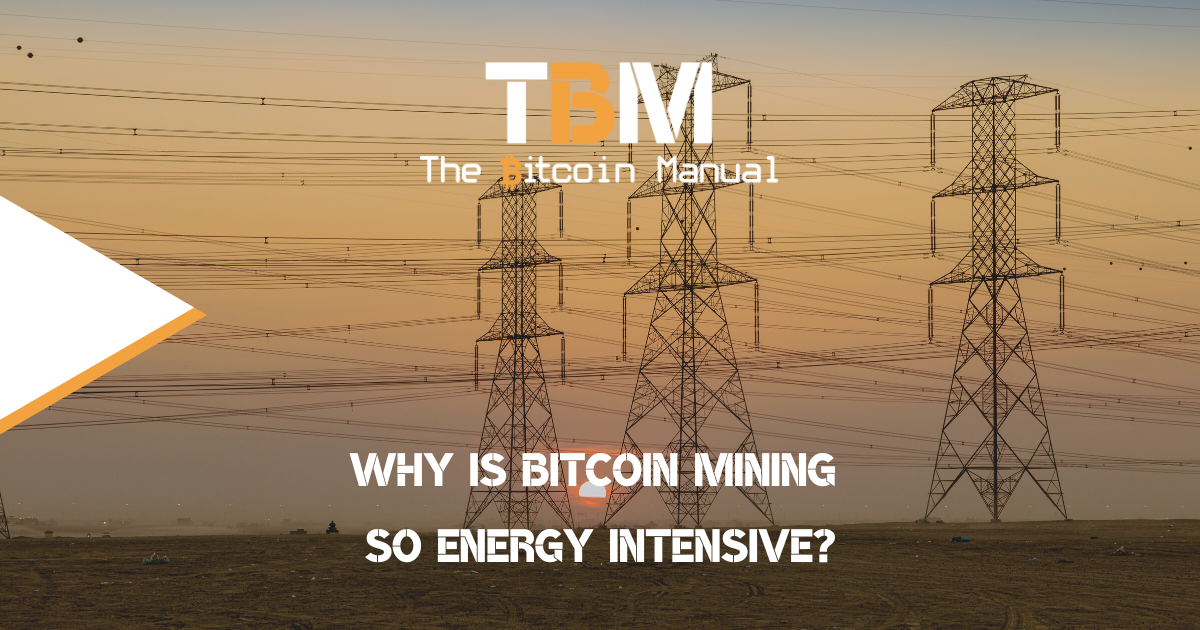 When Satoshi Nakamoto mined the first bitcoin back in 2009, the plan was to create a decentralised payments platform that would revolutionise how we create money, how we manage balances and how we transfer value between participants in the network. The idea behind proof of work was to create a competitive marketplace where anyone could provide security to the network by converting electricity and computing power into hashes.

During those early days when there was hardly anyone supporting the network, you could run the mining software on a laptop or GPU and net yourself a considerable amount of bitcoin. However, the purchasing power during those first five years was negligible.

As bitcoin became more popular and markets were set up to trade the asset for fiat, the interest in mining followed suit as some saw it as a way to generate additional income.

As competition heated up, bitcoin migrated from being powered by many computers worldwide to working through specialised devices known as ASICS, which could push out a considerable amount of hash power to maintain the bitcoin blockchain.

Today bitcoin miners compete on different scales, from the individual home miner to the industrial scale miner, all providing hash rates to record and verify the transaction and earn bitcoin from the block subsidy and transaction fees as a reward.

These transactions are verified by solving complex cryptographic and mathematical problems for which bitcoin miners use a lot of power. To give you an idea of how large the bitcoin network has grown, today, its demand for energy to secure the chain uses more electricity than many countries.

Bitcoin’s thirst for energy has received quite a bit of attention. You’ll probably hear stories of how bitcoin uses more energy than Sweden and Norway or that it uses 0.5% of the total electricity produced worldwide.

How bitcoin transactions are recorded

Every time an individual sends Bitcoin to another, the nodes in the network must verify the transaction, and if they are legitimate transactions, miners can add them to the next block. This prevents individuals from spending coins that they don’t own or making copies of coins they do own and spending them multiple times. To ensure the chain cannot be changed, the network’s security is enforced by the amount of energy used to add a new block.

This provides a massive cost barrier to attack the network and ensures that a better use of any energy pointed to the network via a miner would benefit from providing security. Once blocks are added to the blockchain, whichever miner wins the race in the network rewards that miner with a certain amount of Bitcoin (for example, the reward was 6.25 BTC as of 2020).

This key to this security model is the SHA-256 algorithm-generated, 64-digit hexadecimal number (or “hash”) that is less than or equal to the target hash, upon which is built the most recent block that was added to the blockchain.

In this way, every new block validates every subsequent block, creating the blockchain.

Why bitcoin needs so much energy?

Now that you understand the process behind bitcoin mining consider that everyone who participates in mining is using energy to generate those hashes hoping to be the one that solves the next block and secures the next reward. Every time a new miner comes online, the network needs to adjust to that new competition and make it harder to mine bitcoin through the difficulty adjustment.

As these different competitors all factor in the number of hashes they can produce and the cost to produce hashes, they conduct a race to see how quickly they can package the transactions and solve the next mathematical problem.

Multiple miners around the world are using their access to electricity in competition for rewards. Even though there may be hundreds of thousands of computers racing to solve the same problem, only one can ultimately receive bitcoin. Since most miners are there to net a profit, the incentive is to improve your chances of securing a block either by getting access to more electricity or access to equipment that can turn out more hashes per unit of electricity.

Since improvement in bitcoin miners and your ability to access new upgrades aren’t something, you can rely on, sourcing the cheapest electricity is a variable you can focus on in your bid to try to outcompete other miners.

How difficult is it to mine bitcoin?

If you would like to get an idea of how competitive the network is, you can have a look at how much hash rate is currently pointed at the network to secure a block. Looking at the chart below, you’ll see that despite the price of bitcoin, the hash rate has continued to trend upward as more miners compete and find ways to generate cheaper hash over time.

Because the mathematical problem can only be solved by trial and error (and because the odds of being right in a single try are one in trillions), computers must constantly run to have the best chance of finding the key, verifying the latest transaction block, and being rewarded with the newest batch of bitcoin.

Since the mining process requires powerful computers capable of generating thousands, millions, and even billions of hashes per second. It requires large amounts of electricity and a constant amount of electricity. By having your miner on at all times, you theoretically stand a better chance of securing some bitcoin as you compete for each block roughly every ten minutes.

When number go up, so does miner participation.

One of the key drivers in the amount of electricity coming online and pointed at the bitcoin network is the price in fiat currency. As the value of bitcoin rises, more and more people see it as their chance to secure profits and are incentivised to spend money to purchase mining equipment. At the same time, miners who are already in the market look to secure more equipment or expand their operations, all driving up competition and, therefore, energy use.

Couple this trend with the difficulty of solving each cryptographic problem, only getting harder as the network grows; more and more energy is then used by miners.