What Gives Bitcoin Its Relative Value 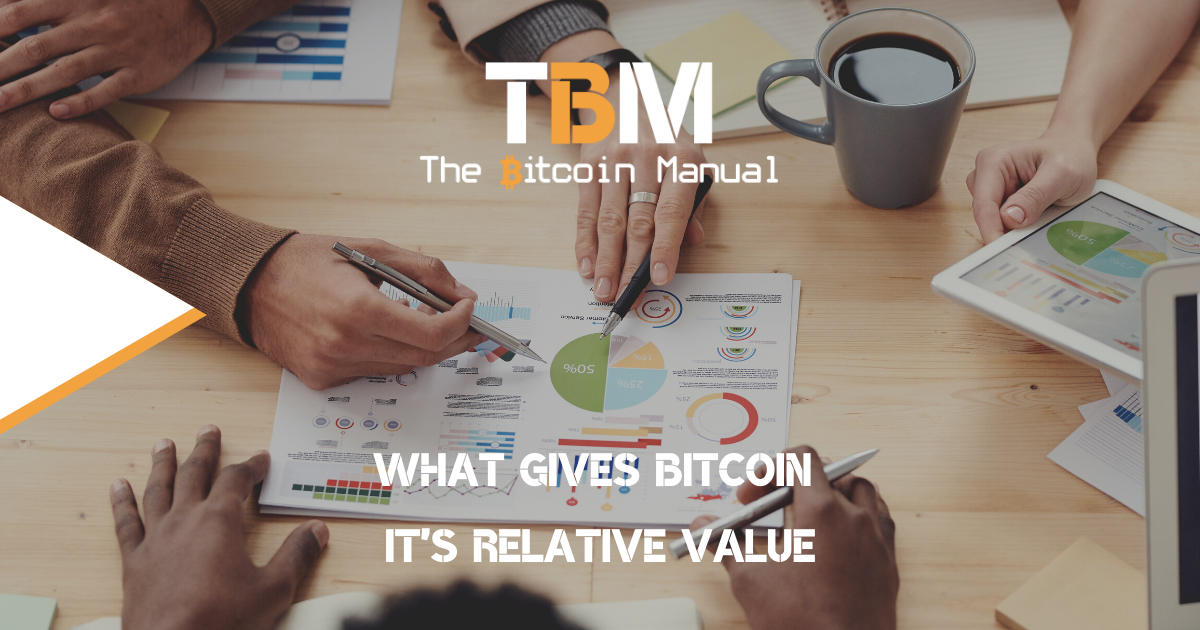 Most people, myself included, come to bitcoin for the price action. We hear or see the formation of this new asset class, we understand that it is volatile and can move in any direction each day, and we hope to profit from it. Unfortunately, most people become fixated on the price action and stop learning about bitcoin and its importance. Instead of diving into the more profound aspects of bitcoin, they prefer to “learn” sideways and remain on the superficial surface level of the price. This sentiment will lead you towards a path of shitcoining.

When your motivation is solely on how to get more fiat in the shortest amount of time, you’re going to use bitcoin as your initial training ground and later transfer to risker bets. When your focus is on price movements, the underlying asset doesn’t matter to you, only the spreads you can pocket, and you have no desire to find out what differentiates bitcoin from the rest of the digital casino chips.

It’s not uncommon for the bitcoin’s price to move violently upward or downward; 4-10% daily moves are the norm, but never rule out moves as high as 50-80% in a day. Bitcoin’s history is filled with meteoric rises and crater inducing crashes. In the past year alone, we’ve seen the price dip below $30,000 in July and climb as high as $69,000 in November 2021.

While the percentage moves are far smaller than in previous years where bitcoin could move up 2, 3, 10x, the purchasing power representation is far more prominent. Catching the eye of the general public, when you see a digital asset holds a value more than most of the worlds annual salary, it tends to draw a lot of attention.

So why does bitcoin’s price move so crazily? What determines the price of a bitcoin?

Why is Bitcoin volatile?

All new financial assets have to start somewhere centralised in ownership, and bitcoin is no different. In the early years, the distribution isn’t widespread, with few holding the asset. A new market has to bootstrap liquidity and participants over time. As more people came into the market, some players would unload their position for a fiat price they found attractive, while others would gobble up bitcoin.

This mismatch of views on the market and ownership of the network fight it out on the open market and cause volatility initially. Bitcoin is considered relatively volatile because we’re comparing it to markets with fail-safes.

If the housing or stock market were to tank tomorrow, central planners would step in to save it and cushion the blow. If a large bitcoin holder or a large number of bitcoin holders get spooked or need liquidity, there is no one stepping in to save them.

If there is a giant dump, eventually, the price settles as those selling run out of coins to sell, and the buyers eat up that additional liquidity at lower prices.

Bitcoin’s volatility is a measurement of how much Bitcoin’s price fluctuates relative to the average price in a given period. Volatility measures the past performance of the price and is used to predict how likely it is that the price will change dramatically.

The higher the volatility – the riskier the asset. Given that bitcoin moves in fiat terms at significant ranges, many investors still consider it a risk asset.

Why does Bitcoin’s price move up or down?

Bitcoin trades on thousands of markets worldwide in a variety of pairs. Some are trading bitcoin for their local fiat currency; others could be trading bitcoin for other cryptocurrencies or stablecoins. Every market made for bitcoin to trade in and out of an asset has an order book.

Each order book has a certain amount of bitcoin available to trade; if one order book is exhausted and there is a supply squeeze. Let’s say Japanese participants are buying bitcoin for the Japanese Yen. When the supply of order books are thin on a local exchange, it attracts opportunities. Arb traders will move bitcoin to that market to try and capture that premium. As bitcoin is moved from one market where it’s overpriced, it can cause ripple effects.

Every day these price corrections are completed in real-time on thousands of asset pairs and, as you can imagine, would move prices in different directions.

These market orders may be responsible for the small day to day price changes, but they are ripples in a bigger pond.

Bitcoin very much trades based on how people feel about the asset, media news positive or negative can move the price range, government policies, bans, taxes, and regulations can all affect sentiment towards bitcoin. The sentiment is not tied to a metric like sales or supply and is a more emotive force. It’s either driven by greed or fear as an interpretation of the latest news.

Another larger cause of price movement in bitcoin is the supply of coins hitting the market, every four or so years, the supply of bitcoin created by mining is cut in half. As you can imagine, if a certain amount of bitcoin hits the open market to fund mining operations, it reduces by half, but the buying demand remains the same; it’s going to quickly gobble up the supply and sellers are encouraged to raise their asking price.

Miners are responsible for bringing new supply to the market; depending on how healthy their operation is, they need to sell less bitcoin to remain in operation and therefore starve the market of new supply.

Bitcoin prices can be manipulated

Bitcoin has no product because it’s the product. In many cases, especially in the earlier years, the value of bitcoin is tracked more like a collectable than stock. As it matured, it started to have more correlation to the stock market, but bitcoin is not a stock.

The price of Bitcoin does not track based on any predictable data. It moves up or down based on how people feel about the market at any given time. When buyers outnumber sellers, the price goes up.

Investors, influencers and celebrities have the ability to move the price of bitcoin not because they affect the network but affect the thinking of people who trade bitcoin.

Bitcoin, like many financial products items, can be manipulated; this can be done through something known as spoofing, where trades are placed on the order book with the intention to either sell or to buy bitcoin. When other traders see these large trades, these other traders can panic and either buy or sell, and once the price reaches close to those large orders, those orders are removed from the order book.

Since bitcoin is traded on a range of international exchanges, it’s not as regulated as other financial assets, so some traders are going to employ riskier trading practices due to the lack of regulatory oversight.

As the largest market, bitcoin can’t be manipulated as easily anymore, and the more it grows, the less profitable it is to try and manipulate markets. These practices then tend to move to smaller cryptocurrencies simply because of the lack of liquidity and the ease of moving those markets.

Leveraged bets on top of bitcoin

In addition to the spot market, there are also side markets for traders to get more exposure to bitcoin. These are known as leverage traders; in this case, traders take on more risk and borrow bitcoin to buy or sell in the market to try and make larger profits.

If the underlying market goes against their thesis, it can force these traders to sell and close out positions or get liquidated, putting further selling pressure on the market and driving prices down even lower.

The opposite is also true in a positive run, as people borrow more bitcoin to go long on the trade, taking more supply off the market to lock up for these trades, making it more scarce and pushing the prices up even more.

You can think of this as adding further fuel to the fire, and that’s what can give bitcoin even bigger price movements than if there were no leverage trades or large positions on in these side bets on the price movement.

The world is trying to price a new asset class

Bitcoin is a completely new paradigm for all market participants; very few know what it is, how it will be used in the future, how big the market will be as people around the world adopt it, what markets it will disrupt and to what extent or how governments react to it. Considering all the unknowns is what investors have to wrestle with, and as new information presents itself, investors, both institutional and retail, change their allocation.

As information is not evenly distributed, some pay attention. In contrast, others do not, so too is this information asymmetry reflected in peoples portfolio size, their exit price or how much bitcoin or fiat they’re willing to risk on the open market to acquire or sell bitcoin.

Volatility is your friend

Bitcoins volatility is not about to subside anytime soon; despite being older than a decade, it’s still in its formative years, and we need these moves to redistribute the coins. Bitcoin’s high volatility may make it difficult for businesses to accept it as payment. Still, it does offer an investment opportunity for those willing to consider it as part of their portfolio.

When you trade into bitcoin, you leave the faux safety or instead stability of fiat currency and deal with volatility. It can be an opportunity, but it can also be a test of your conviction or belief in the other properties of bitcoin. It is up to you to decide how valuable you feel bitcoin is in terms of having an asset that is globally recognised, censorship-resistant, with a known monetary policy.

Everyone values or understands these traits differently and therefore prices the value of them at different prices.

South African bitcoin pleb falling down the rabbit hole and willing to share every bump, scratch and knock along the way
View more articles from this author
PrevPreviousWelcome To “Shaft-flation”
NextBitcoin Gaming: Word BreezeNext