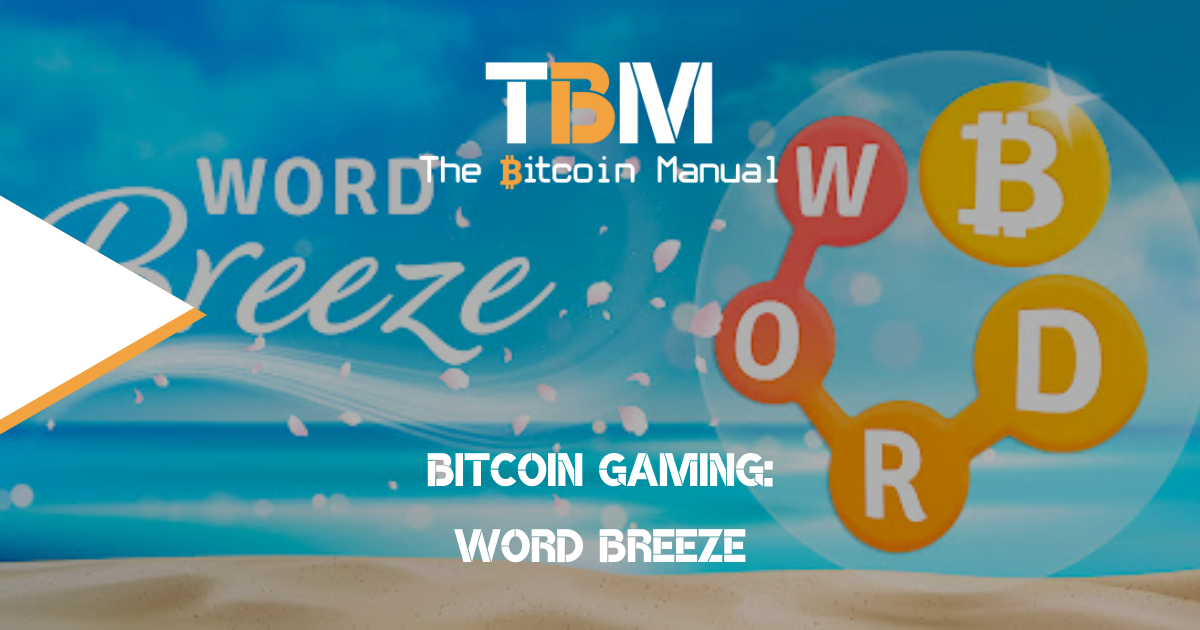 As someone who writes blogs, I’ve always had a bit of a penchant for word games such as scrabble or boggle. Mainly to help with my own vocabulary and find the right words for what I want to put out there.

When I was on Facebook, there were games from Zynga such as Words with Friends and Scramble with Friends which is where I met one of my biggest word game foes to date.

She was President of her local poetry club and the words she would play in those games taught me a strong lesson that my own personal dictionary needed some work! We stayed good friends and met up a couple of times pre-covid whilst learning a few more word games.

One of the ones I picked up was called Wordscapes which is a combination of word search, cross words and scramble, with different landscapes in the background.

This was a good time waster for those spare moments but after going on a deep dive in to Bitcoin Gaming recently, I discovered a game from PlayDay Studios that has combined Bitcoin with word games and thought it was worth investigating!

As Bitcoin starts to catch the attention of more people across the world, games seem to be a great way to onboard many to it. So today, I’ll go through Word Breeze and see how you can train your brain whilst stacking some sats.

PlayDay Studios was founded in 2020 by Amy Wan and Dan Rice with the purpose of bringing Bitcoin to casual gamers. They have developed a couple of brain games such as Solitaire and Sudoku, which I’ll be covering in future.

They have partnered with Bling Financial which is a fintech (financial technology) company founded in 2017 that aims to “make money fun” by allowing users to earn Bitcoin by playing casual games.

Bling have launched their own games but recently partnered with PlayDay Studios to release Word Breeze in December 2021.

What Is Word Breeze?

Word Breeze is a word puzzle game that combines factors of word search, scramble and crosswords with the aim to complete the grid of words using a combination of letters to make 2+ letter words.

Finding hidden words will give you additional points that you can use to buy power-ups with and hints, should you struggle to find the words necessary to complete the grid.

As you complete levels, you will earn Bling points, which you build up over time and can redeem for sats. Bling sometimes have events where you can earn bonus points, which are mentioned from time to time on their Twitter page.

Please note: Word Breeze is currently only available on Android at time of writing.

Having played Wordscapes before, I was already expecting a similar experience to that and was very easy to get an account set-up with Bling either via Gmail, Facebook or provide an email address.

Everything seemed to operate pretty smoothly when I was playing although one time the loading screen did freeze when I went back from the main game.

The background changes landscape after every few levels to various relaxing scenes such as beaches, sunset and mountain landscapes.

There is a limit on how many levels you can play though due to something called “Party Power”, which you use up as you play games and earn the Bling Points.

This is probably a good thing to stop you playing on the game all the time and you have a countdown timer on the home screen so you know when you can play again.

If you get stuck there are two help bonuses on hand. The light bulb fills in one letter on the grid at random and the magic wand allows you to pick a specific empty space on the grid and fills it in. These cost you gems which you earn by finding hidden words.

How Can PlayDay Studios & Bling Reward Players With Bitcoin?

Thanks to the sponsors and investment from the companies mentioned earlier, PlayDay Studios & Bling can reward players with sats.

Partnering with Coinbase Ventures has allowed players to have their Coinbase account be credited with sats once enough Bling points have been earned and you want to redeem.

There are also a copious amount of adverts in this game which would add to the revenue to fund the game and sats to the players.

These can get a little intrusive as they appear after almost every level and I didn’t see an option to pay to remove them so it looks like they will be staying for the foreseeable future.

As time goes on, there will likely be more developments happening, given that this game only rolled out 2 months ago at time of writing.

How To Withdraw Sats From Word Breeze

You will start earning Bling points every time you complete a stage, which can consist of one grid or more than 5. Once you build up enough Bling points, you will be able to redeem these for sats.

At the moment, in order to withdraw sats, you will need to create a Coinbase account or link your Coinbase account if you already have one, using the same email address you used to set it up with.

When you have connected to Coinbase and built up enough Bling points, you can withdraw to your Coinbase account. At time of writing, you needed a minimum of 10,000 Bling points in order to withdraw.

It seems that you’re only allowed to withdraw once per week so in between each week, you can build up enough Bling points to withdraw. There is a countdown timer on the home screen that shows you when you can next withdraw.

Bear in mind, you will not be earning much and they do state this on the download screen, it seems that the ratio of Bling points to sats is very high so you need to build up a lot of points (at time of writing).

My Thoughts On Word Breeze

Overall, I’d say this is a good game if you wanted an upgrade from playing the non-Bitcoin rewarding versions of the same format.

Everything ran smoothly and it’s a relaxing game to play with the gentle music and sound effects. A good way to spend a lazy Sunday afternoon.

However, the adverts did get annoying, appearing after every level at one point which I thought was a bit much. Could probably do these every 3-5 levels to make the adverts less intrusive.

You will also need a constant internet connection, otherwise the game won’t load or let you play – this is likely due to the adverts.

The other thing that irked me is the lack of lightning wallet support, which is what small transactions of this kind are made for. I’d personally like to see the game make developments to withdraw via lightning invoices, which is something I’ve been used to with other games I’ve reviewed recently.

Yes, you can withdraw to a Coinbase account but you won’t be able to withdraw it from there to cold storage until you’ve built up a sizeable amount that makes it worthwhile paying the withdrawal fee.

There’s no easy withdrawal or lightning support on Coinbase yet so be aware of the shitcoin casino trap – withdraw your sats to cold storage as soon as you can on Bitcoin’s mainchain.

Still, if you can live with that, enjoy word puzzles and earn sats then it’s worth a go. Let the sats breeze in your direction 🙂

Please note: Word Breeze is currently only available on Android at time of writing.

British bitcoin pleb falling down the rabbit hole and willing to share every bump, scratch and knock along the way
View more articles from this author
PrevPreviousWhat Gives Bitcoin Its Relative Value
NextBitcoin Apps: Stacker NewsNext