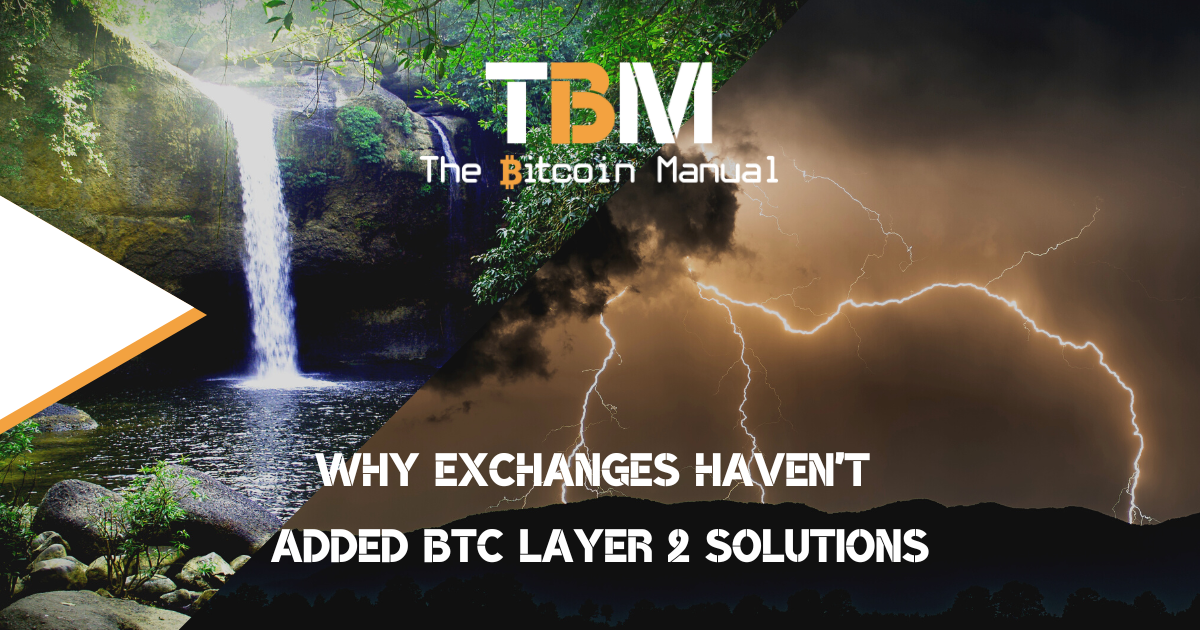 Bitcoin’s reputation as slow and costly to use has been addressed with the launch of layer two environments that help take a load off the base chain and move it to these pegged environments. While on-chain fees has steadily increased, we have not seen block space under so much pressure that fees have blown out as they did in January 2018 during that bull market.

To some services credit, we have seen a few centralised exchanges start allowing Lightning deposits and withdrawals, while Liquid Network federation members have grown in the last three years.

However, Liquid Network-enabled exchanges and Lightning Network supporting exchanges are in the minority. Larger exchanges don’t seem to be interested in supporting these alternatives, much to the frustration of many bitcoiners worldwide, but why is that?

Exchanges will say that these networks are untested, unproven and do not have a lot of market demand, but I find this argument rather mute, especially when these exchanges are willing to list a host of second-layer solutions for other chains as well as a host of low liquidity altcoins.

If you’re willing to support all these chains’ infrastructure, set up nodes, and a custody environment for these chains it should be a fairly straightforward operation to spin up a Liquid node and Lightning node and manage capacity in limited amounts until customer demand grows.

If we have a look at what exchanges have to say on the topic they’ll point to a lack of liquidity on these networks they claim that the relatively low limit on how much money can be sent over the Lightning Network and Liquid Is the reason a reason they haven’t decided to support it yet.

Both Liquid and Lightning now hold well over 3500 BTC in each network and the numbers are on a continuous growth trend.

So yes, these networks are pretty small when we consider that there are 19 million bitcoin in circulation and the amount of 24-hour volume for exchanges far outpaces that capacity, but there are many exchanges that this would still work for, and by onboarding, their customers would also increase capacity over time.

L2’s defiantly have their limitations, retail may not yet be comfortable operating wallets that speak to different networks like Liquid and Lightning, and there is still a big educational drive involved. While Liquid is a “peg-in system” which shouldn’t have much issue in increasing capacity, lightning has several limitations regarding effective use of capital in the network.

Improvements such as channel splicing, improved routing, submarine swaps, fallback addresses and wumbo channels are helping build out the Lightning stack to become more robust, but with so much money to be made focusing your support on adding new coins the incentive to have a more streamlined Lightning experience isn’t very high.

Why exchanges might be slow to support layer two bitcoin

Bitcoin is the primary asset used to get customers onto exchanges; it’s why most new users come to exchanges, create an account and deposit money. Bitcoin makes up a large portion of its customer base and trading volume; it’s the way they advertise to new users, selling you the “safe bet”, and then once you’re in, it’s about getting you to “diversify” as the “savvy investor”.

Exchanges are encouraged to increase their AUM (assets under management); the more coins they control, the more assets they can use to create markets for traders or rehypothecate funds and lend them out to earn a yield on your funds.

If exchanges start to support layer two solutions, it could impact the amount of bitcoin they are able to hold on behalf of customers as self-custody becomes far cheaper, and consumers would not need to feel the need to leave their coins on exchanges to save on fees.

Additionally, getting more people to self-custody means they spend less time on your exchange, resulting in fewer trades and fewer fees earned per user.

When exchanges hold the custody of your funds, they have a tether to you, a tether they can use for a host of marketing gimmicks. Since they are the holder of your funds, you’re likely to check up on all their newsletters, social media updates and push notifications.

They will promote a host of tactics such as trading on a new coin, getting bonuses for trading, holding their exchange token to get a discount on fees or encouraging you to take more risk with more complex products like leverage trading or futures contracts.

The longer your funds are hot, the longer they have to get you to spend it on different trades and financial products these exchanges create, and the more chance of you losing your funds on a bad trade and exchanges can sweep up your coins.

The mistake many new traders make is assuming exchanges have their customer’s best interests in mind; no, it’s all about profit and keeping the gravy train going as long as possible. If you’re not taking self-custody of your funds, you’re taking on the risk. The risk of having a third party take custody of your funds and use them as they see fit until you claim them.

As they keep you within their walled garden, they will encourage you to take on more risk, like trading opportunities, interest accounts, leveraged trading and other financial products; it’s all part of the plan of either making more in fees from your activity or earning through various rehypothecation strategies with your funds.

The modern cryptocurrency exchange is more of a casino than an asset broker and will employ tactics that encourage you to take positions where the house wins most of the time. If you want to play these ape games, by all means, don’t let me stop you, but if you want to hold bitcoin the way it was intended, self-custody is the way to go.

How do you hold your bitcoin?

Do you hold bitcoin on an exchange? What are your reasons for not holding your bitcoin in a wallet where you own the keys? Have you tried using Liquid or Lightning?

South African bitcoin pleb falling down the rabbit hole and willing to share every bump, scratch and knock along the way
View more articles from this author
PrevPreviousBitcoin App: VIDA Live
NextWelcome to Maxi-Making SeasonNext