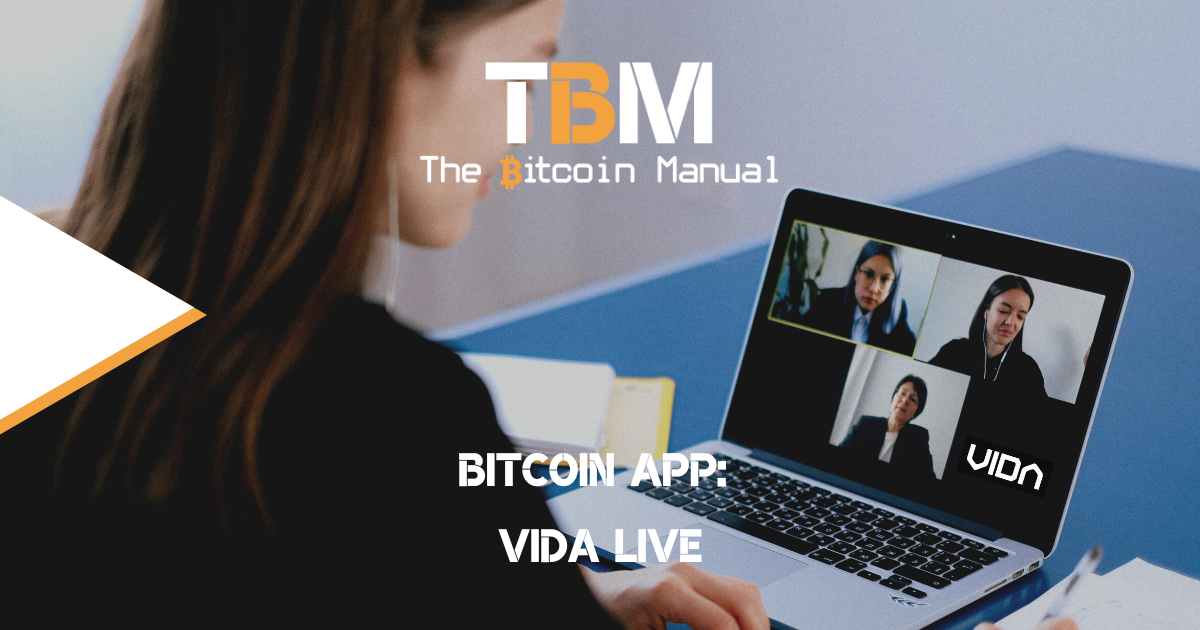 The world of bitcoin native apps is expanding and, in the process showing us how we can wrap bitcoin into a native internet experience and open up new monetisation opportunities. Every day we see millions exchanged through the Internet via live streaming apps such as YouTube and Twitch, but they have limitations and can also be censored.

The world’s live streaming market is set to reach $4.26 billion according to meticulousresearch.com, which is a pretty lucrative, internet native, high-margin market that bitcoin alternative can indeed make a play for market share.

One such app is aiming to do just that; VIDA.live is a web and mobile app developed by Lyle Pratt that aims to tap into the growing trend of social streaming and online tipping. VIDA also acts as a paywall communication app that values time by default to give creators and streamers more control when communicating with their audience.

VIDA uses the Lightning Network and bitcoin as its native payment method to facilitate interactions between users via video, audio or text and can be used on mobile and desktop with support on iOS, Android, and the web app.

If the caller wanted to reach out to you, they would need to pre-fund their VIDA app with bitcoin and then use that bitcoin to pay the cost users set to receive messages or to receive a phone call. As a caller, you are made aware of who can be called either via the profile page or via the search, as well as the cost per interaction.

Using VIDA, you’re not limited to only 1:1 video calls, but you can cater to a wider audience through its live broadcast feature. In a live stream, multiple viewers can watch a presentation and interact via chat. Making VIDA is thus suitable for broadcasting a conference, presentations, training, lectures and more on the Internet and monetising it with a fee.

The intention behind VIDA is a network of individuals that value their time and attention since individual users can set the price for a call or message. The app allows anyone can get in touch with you as long as they pay for your time in sats. No one can contact you unless they pay your rate and you’re’ guaranteed to be paid live, in real-time in bitcoin.

Is VIDA free to use?

VIDA is free to install on your mobile device and set up your account, and while you can receive messages and calls, it is not free to use as someone needs to pay to contact you and vice versa.

When users perform calls or sends a message on VIDA, the app takes a percentage of the sats sent to you as a network fee. The default rate is 20%, but you can cut that in half by connecting your own Lightning Node.

The reason for the fee set-up is to create an incentive to encourage Lightning Network growth and reduce VIDA’s regulatory burden. If you are connecting a node to VIDA right now, 90% of network fees are recycled directly into the Citadel Partners program (they give them back to you) to grow the network.

What do I need to get started using VIDA?

All you need to get started with VIDA is to head to the site, If you’re using a desktop device or download the app on your preferred mobile device. You will also need a Twitter account as this is the only method of signing up, but alternative methods are in the process of integration.

Once you’ve signed in with your Twitter account, you’ll be able to use the app to Live stream or receive messages and calls.

Alternatively, if you want to make calls or send messages to other VIDA users, you’ll need to fund your account with bitcoin either using a Lightning Wallet, A Lightning exchange or the popular fintech apps Cash App and Strike.

How to earn sats on VIDA?

The easiest way to earn bitcoin on VIDA is by setting the fee you would accept for calls and messages; you are free to set any fee you like, remember that 20% of that will be passed on to VIDA, so make sure you factor that in when setting your price.

Alternatively, you can use the live streaming function to get users to pay per minute to tune in based don’t the fees you set while also earning from users wanting to engage through the chat function.

This is a simple rewards program to encourage the growth of the app by rewarding the user base. Once you’re set up on VIDA, If you’re the first person a new user contacts, VIDA pays you a portion of the network fees it earns from the user’s activity. They are currently paying out 90% of network fees to members of the Citadel program to grow the network, but don’t expect that to last forever, so if you plan to get your friends on the app, now is the time to do it.

How to add or withdraw sats on VIDA

VIDA provides a custodial Lightning Wallet making it easy for anyone to get started; all you need to do is have bitcoin on the Lightning Network, head over to fund your account and create a deposit invoice. You’ll be sent to a screen with a Lightning invoice or QR code which you will need to pay either using your Lightning Wallet, Lightning Exchange App, Strike or Cash App.

Alternatively, if you don’t want to use the native VIDA wallet, you can take more control over your funds by using an LN bits wallet you set up using your own node and then connecting VIDA to your LN bits wallet.

If you have funds on the VIDA Wallet and would like to withdraw them to another wallet, then you can issue a withdrawal using a Lightning Invoice. Head over to the Lightning wallet you want to use and create a received invoice, set the number of sats you want and copy the lightning invoice.

Then head over to VIDA and paste in the invoice and select withdraw.

Note: Only 99% can be deducted from the credit as a balance must remain on the Lightning Wallet, so don’t freak out if you can’t extract your total balance.

VIDA.live also allows you to connect your Twitter DMS to the app to help eliminate Twitter DM spam by enabling an auto-response mechanism, meaning you can now leave your DMs open and let VIDA filter out the chancers, scammers and spammers from the real connections.

Once you enable the feature, when a user sends you a message, the VIDA app will automatically respond with a message requesting that the user message you via your VIDA.live profile URL.

Who would benefit from using VIDA?

VIDA is another tool for anyone who has to deal with cold leads on a regular basis and can provide an interesting monetisation model for the likes of influencers, coaches and consultants whose time is very valuable and people are willing to pay for that time with Bitcoin.

VIDA allows you to expand your operations globally and reach more people without the worry of dealing with banks and exchange rates. With such favourable rates and low processing fees, you get to keep more of the value you create instead of having apps and third-party payment processors eat into your margins.

There you have it, an easier way to enjoy your Twitter experience without spam DMs or turning cold calls and messages into a way to earn a few sats.

If you’d’ like to learn more about the app or give it a try, check out the links below.

If you sign up for VIDA, you can also follow The Bitcoin Manual and send us a message via the app if you’re keen on giving it a test.

Are you using bitcoin inspired apps? Which app is your favourite? Do you have one you’d’ like us to cover? Let us know in the comments down below.