What Is A Bitcoin Bridge?

Home » Articles » What Is A Bitcoin Bridge? 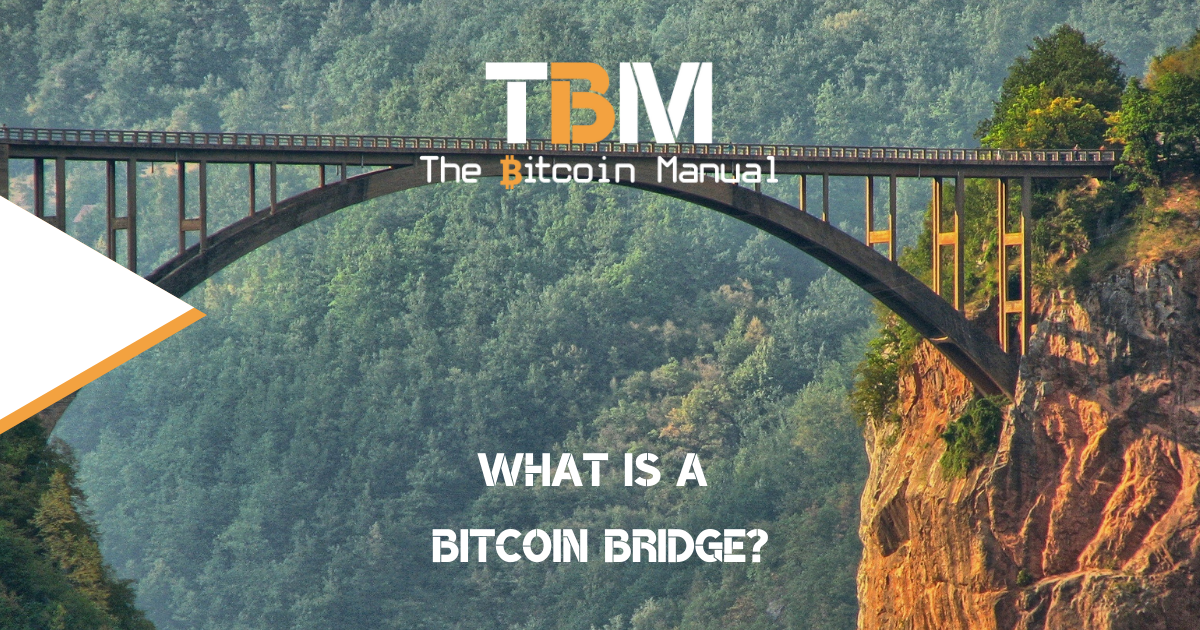 As we try to push bitcoin forward as a monetary network, we will always have competitors and imitators trying to take a piece out of the bitcoin pie. Altcoins are trying their best to absorb users and liquidity out from under bitcoin, and they’ve failed abysmally to date, as bitcoin continues to dominate the market despite competition moving into the thousands.

As alternative networks find that users do not want their subpar assets,t they’ve looked to add new features to try and attract users and liquidity. One of these gimmicks has been the creation of wrapped bitcoin and bitcoin bridges on alternative coin networks.

What is a bitcoin bridge?

A bitcoin bridge is a tool that lets a user create representative assets from one blockchain to another, allowing users to leverage the value of the assets they hold on another blockchain and improve their interoperability, or so they claim. Since blockchain assets like bitcoin are often not compatible with other chains, bridges create synthetic derivatives that represent an asset from another blockchain.

If you use a bridge to send one bitcoin to another chain’s wallet, that wallet will receive a token that has been “wrapped” by the bridge – converted to a token based on the target blockchain.

How do bitcoin bridges work?

Bitcoin bridges come in two forms; the first method is similar to exchange but uses a blockchain chain instead of their trading engine and claims. In this instance, the tokenised bitcoin is held by a centralised custodian who issues these other “wrapped bitcoin” on different chains

The second form would be using a smart contract; a smart contract oracle checks a designated bitcoin multi-sig address, and when bitcoin is added or removed from that address, so too will the smart contract mint or burn representative bitcoin tokens on the applicable chain.

In either instance, you’re taking on the risk that you would not have by using the bitcoin chain proper. You’re trusting a 3rd party custodian to honour your redemptions and maintain the backing 1-1 peg with that bitcoin.

Alternatively, you’re trusting a smart contract and its applicable oracle, the creators of that contract and the oracle provider, who could change the price feeds or wallet address, feeds.

If you are using a bitcoin bridge

If you do want to acquire some bitcoin, it may be a better option to choose a centralised service provider; if you don’t want to KYC your purchases, P2P markets might be a better option. But that doesn’t mean bridges don’t form part of your options as a bitcoiner, access and liquidity might be hard to come by in your region of the world, or your country’s fiat money might not have an established market in cases like this, bridges might help.

There might be instances, like uses who hold stablecoins on certain chains, due to remittance or payment for services rendered, those stablecoins could easily be converted into wrapped bitcoin via a bridge and then migrated back to the base chain. Allowing for another on-ramp for bitcoiners who might otherwise struggle to access the world’s most pristine asset.

Once you do acquire these wrapped versions of bitcoin, it would be advisable to find a swapping service or a redemption service where you can trade that bitcoin tokens for actual bitcoin hosted on the base chain.

If you plan on holding bitcoin, you want to eliminate any risk and third-party involvement and tokenised claims. While not similar to bitcoin on exchanges, it does carry a similar risk profile, as there are custodians or smart contracts holding that bitcoin rather than you with your bitcoin private key.

Bridges are a way to attract users into alternative ecosystems to drive users and transaction volume for these competing networks by leveraging assets like bitcoin and stablecoins. While I do see the use case, I think it’s severally limited, and something bitcoin will absorb in the future.

I think bridges are a bit of a stop-gap solution due to limitations in moving value from stablecoins between the various bitcoin layers, which is a viable use case. The Liquid Network does provide stablecoin access and on-chain swaps to L-BTC, while the Lightning Network continues to push forward multiple implementations of stablecoins.

There is nothing inherently wrong with bridges like exchanges are a necessary evil to drive adoption and spread bitcoin liquidity worldwide during this adoption phase. As long as you use bridges, knowing the risk you’re taking and keeping it in mind along with the intention to self custody; it should still be considered a method of acquiring bitcoin.

It doesn’t matter how you get there, once you’re in bitcoin, on the main chain that’s all that matters.

What do you think of bridges?

Have you used a bitcoin bridge in the past? Which one did you use and why? We’re always keen to learn from other bitcoiners, so feel free to share your story with us in the comments below.

South African bitcoin pleb falling down the rabbit hole and willing to share every bump, scratch and knock along the way
View more articles from this author
PrevPreviousWhat Is Tainted Bitcoin?
NextBitcoin Racing In Pole Position To Spread Bitcoin AwarenessNext