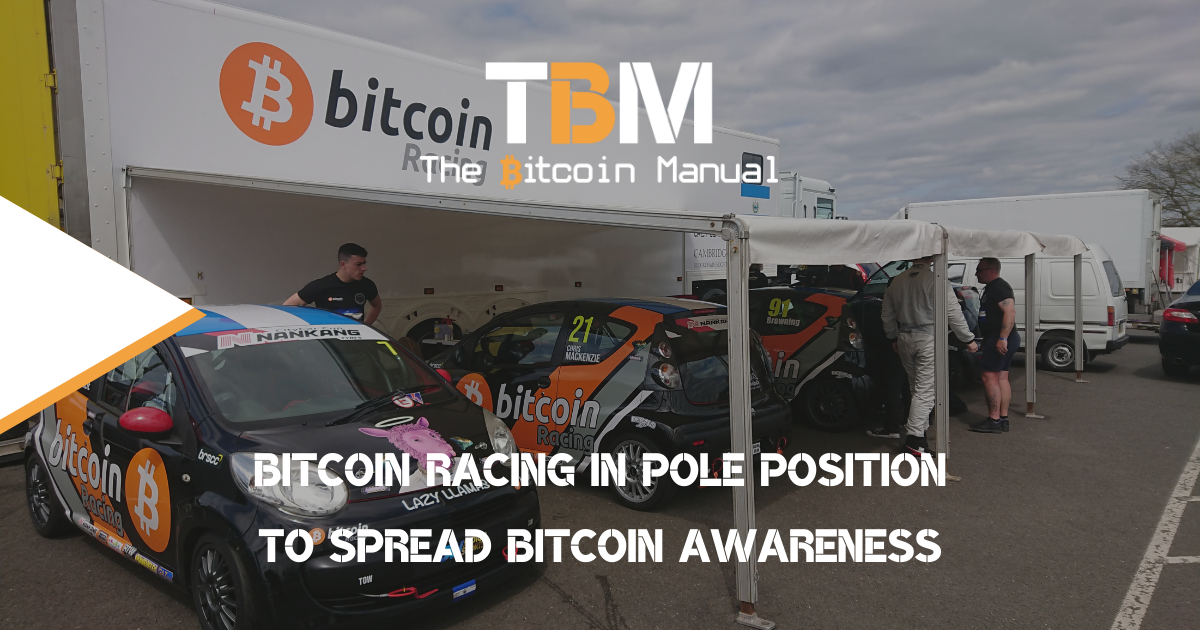 The global motor sport industry is big business with $190 billion in annual revenue reportedly being generated in 2019 and in the UK, it’s not doing too badly either, with around £2.4 billion ($3 billion) turnover generated in 2021.

In terms of people tuning in to watch motor sport on TV, Sky reported nearly 1.6 million viewers on their live events broadcast during 2021 and, despite lockdown restrictions still in effect in some countries, 2.69 million attended racing events across the world.

These figures are just for F1 and as you can see, there is already a vast number of adoring fans fixated on the adrenaline rush of race days.

However, one racing group believes that there is an opportunity here to showcase something else in front of the fans – you can probably guess what that “something” is!

Let’s head off to the races and meet up with Bitcoin Racing to get up to speed on what they’re aiming to do.

Who Is Bitcoin Racing?

Bitcoin Racing is a team of family and friends that are dedicated to spreading the word, education and adoption of Bitcoin through the medium of motor racing.

They are partaking in racing events up and down the UK, getting there via an HGV with huge Bitcoin logos, decal and artwork on the side, with their main race cars also decorated with the Bitcoin logo we all know and love.

I had the pleasure of meeting the team yesterday with a fellow Bitcoin Pioneer at Snetterton Circuit in Norfolk, UK, for their second race event of the season .

This was my first time at the races and I have to say, seeing the army of Citroën C1s with the Bitcoin decal zipping around the race course was a sight to behold!

In the first race, there were 4 C1s from the team and as the announcer on the tannoy was going through the racers of the grid, the word “Bitcoin” got mentioned a few times in quick succession and I did have a little smile with the team.

That’s exactly what the team wants to have – as much visual and audio impact as possible, along with the huge HGV that stood tall amongst the rest of the racing teams with the Bitcoin logo beaming down the orange light like a lighthouse beacon.

Unfortunately, the last race of the day was cut short due to a crash but thankfully, everyone came out of it unscathed – “Well, I’ll be damned” 🙂

As the racing season continues, there will be plenty of opportunities to meet the team on the UK racing circuit. Below is a list of the remaining events in the racing calendar in 2022:

For more information about these events, keep an eye out on their website and social media accounts (links to which are at the bottom of the article).

As I was speaking with the team in between races, they were telling me about their aims to move up the racing leagues by investing in more powerful cars and working with Bitcoin businesses, brands and plebs alike.

This will vastly increase their exposure as there will be more media coverage and also, the more cars and tournaments they have to enter for races, the more people will see the Bitcoin logo – that’s never a bad thing!

They have already developed strong partnerships that include the ambassador of El Salvador coming to their first race, giving them permission to use the El Salvadorian flag, and a “mystery driver” who is set to become a celebrity who will be a brand ambassador for Bitcoin.

These will provide a strong foundation for them to build further, all whilst spreading awareness of Bitcoin in the UK and getting fellow Brits to stop believing Andrew Bailey’s Bank of England shaft-flation.

Having met the team at Snetterton yesterday and listening to them talking about their aims, the connections they’ve made already and their passion for Bitcoin, there is a bright future ahead for them and they are definitely in pole position to spread Bitcoin awareness.

If you have a Bitcoin business, are looking to invest or help the cause then you can get in contact here and work with Bitcoin Racing.

British bitcoin pleb falling down the rabbit hole and willing to share every bump, scratch and knock along the way
View more articles from this author
PrevPreviousWhat Is A Bitcoin Bridge?
NextWhy Altcoin Self Custody Is PointlessNext