What Is Tainted Bitcoin?

Home » Articles » What Is Tainted Bitcoin? 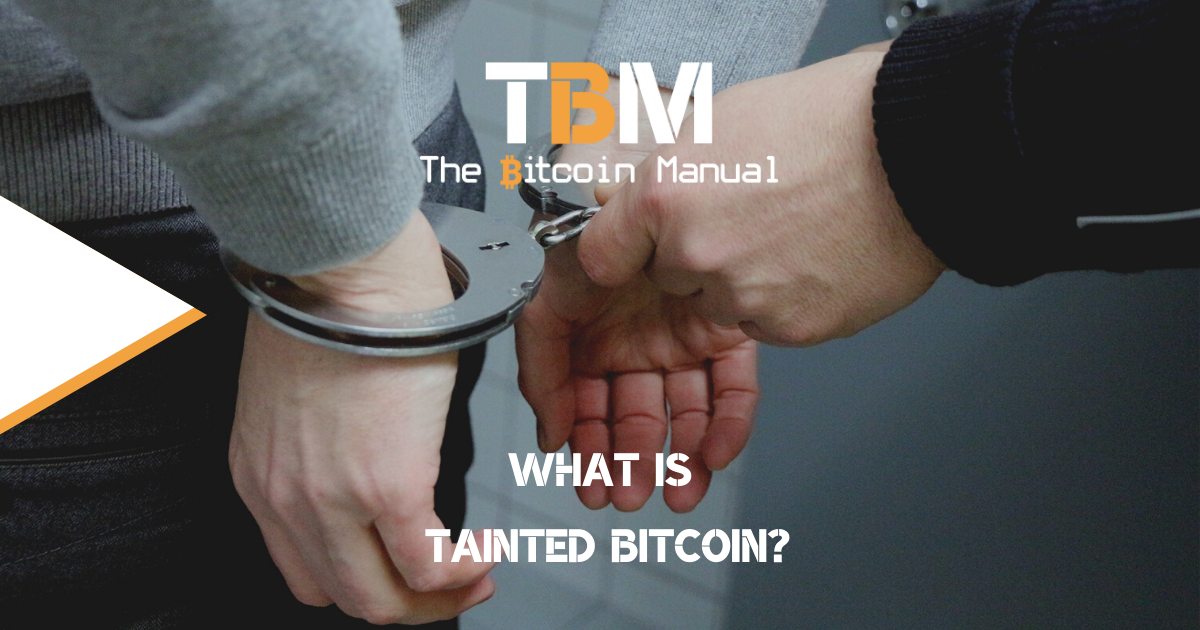 Bitcoin’s permissionless and open protocol allows for the free flow of value on the internet that makes it hard to confiscate, and this has always worried authorities who want to remain in control. In a bid to keep bitcoin from reaching more people, narratives have been spun up regarding the amount of illicit activity conducted using bitcoin, how coins can be tainted permanently, and insinuating that the average user could get caught in the crossfire.

What is tainted bitcoin?

The bitcoin network knows no difference in bitcoin; as long as you have the private keys that claim ownership of the UTXOs, you can transfer them to any wallet you like, and no one can stop you. Tainted bitcoin, however, refers to a metadata overlay of the network, governed by a central authority.

Tainted Bitcoin is a concept of tagging bitcoin associated with the illicit activity as “dirty” and that the tagging will continue indefinitely on that bitcoin despite it being transferred and changing ownership.

If authorities do enforce these tainted blacklists, the concern is that individuals might unknowingly receive tainted bitcoin, through no fault of their own, and might have their funds seized and accounts blocked should they move it to a centralised authority where you give up custody like an exchange. Alternatively, selling the coins is subject to increased scrutiny before they can make a payment, with a merchant accepting bitcoin as payment.

How can a coin be tainted?

There is no dedicated regulatory authority that, after careful consideration, declares that a bitcoin holder or transaction in the past was associated with illegal activities. Authorities in different countries may keep their own list or use lists they request from other governments, and with the help of chain analysis firms, they can keep track of coins thought to be used in criminal and illegal activities.

Another method of taint data can come voluntarily, such as the case where the victim of a bitcoin scam might report the associated Bitcoin address to bitcoinabuse.com. This would trigger a warning that the associated address would be tainted. But the accused was never convicted of a crime.

In cases like these, coins may be blocked on address, or the bitcoin originating from it once moved to a custodial account before the suspect is actually convicted of the crime by the proper authorities, as we’ve seen with hacked funds in the past.

In other circumstances might be a signal for further due diligence, especially if it would be considered a high-risk transaction, but it is not a determinator to block the transaction.

The bitcoin network is under constant surveillance by various firms who place their own weighting on transactions and assign their own metadata so we cannot be sure what they are looking at or flagging. However key indicators that could signal a possible taint on a UTXO include:

Obligations to act on tainted coins

Regulated businesses and service providers are obligated to adhere to respective anti-money laundering laws and regulations. That doesn’t necessarily mean they have to make sure they don’t accept any illicit funds (since that would be impossible), but it does mean they should be making a genuine effort to minimise money laundering by having a real compliance program. The genuine effort they make is critical or these institutions could face legal action.

Institutional on-ramps and off-ramps become the primary chokepoints for tainted coins and those who have flagged coins would do well to steer clear of any transactions where they have no signing control over their funds.

Once you’re in the bitcoin network, there is little a central authority can do to stop you from signing transactions with virgin or tainted coins and moving them to different wallets. However, you need to be cognisant of the metadata attached to coins and the possible footprint you’re creating and focus on using the best privacy methods around, especially if you plan on doing business with a centralised chokepoint like an exchange or merchant in the future.

Even for bitcoiners who don’t use centralised services, increasing the fungibility of one’s coins is desirable. If everyone routinely used mixing services such as Coinjoin, Coin Mixer, stealth addresses, confidential transactions, and submarine swaps between layers, blockchain analytics firms would lose the ability to track and flag transactions as suspicious. The more coins that pass through mixing machines, the harder it will be for anyone to discriminate over time as we all constantly break ownership heuristics methods used by these firms.

Paint over the taint

Remember all bitcoins are created equal and where the network is concerned, there is no discrimination due to a coins history, to the bitcoin network all it is is moving data from one wallet to another. Taint only exists in the eyes of blockchain forensics firms and the governments that hire them to conduct tracking and tagging programs.

If these companies are to be believed, coins that have been used in criminal transactions are ‘tainted,’ destined to be forever linked with nefarious activity, but that is not to say these lists don’t have vulnerablities of their own.

While tainted bitcoin is a reality we have to deal with today, and people will get caught for using it, it may not be the case in perpetuity as users learn to use privacy practices and new services are rolled out. The bitcoin network continues to explore new avenues for privacy such as taproot and payjoins which all contribute to the privacy stack to help combat this KYC creep into bitcoin and reduce the ability to attack the networks fungiblty.

Have you had a tainted bitcoin experience?

Have you had to deal with a tainted coin in the past? How did you overcome it? Let us know in the comments down below.

South African bitcoin pleb falling down the rabbit hole and willing to share every bump, scratch and knock along the way
View more articles from this author
PrevPreviousHow Bitcoin Mining Can Stop South African Load-shedding
NextWhat Is A Bitcoin Bridge?Next