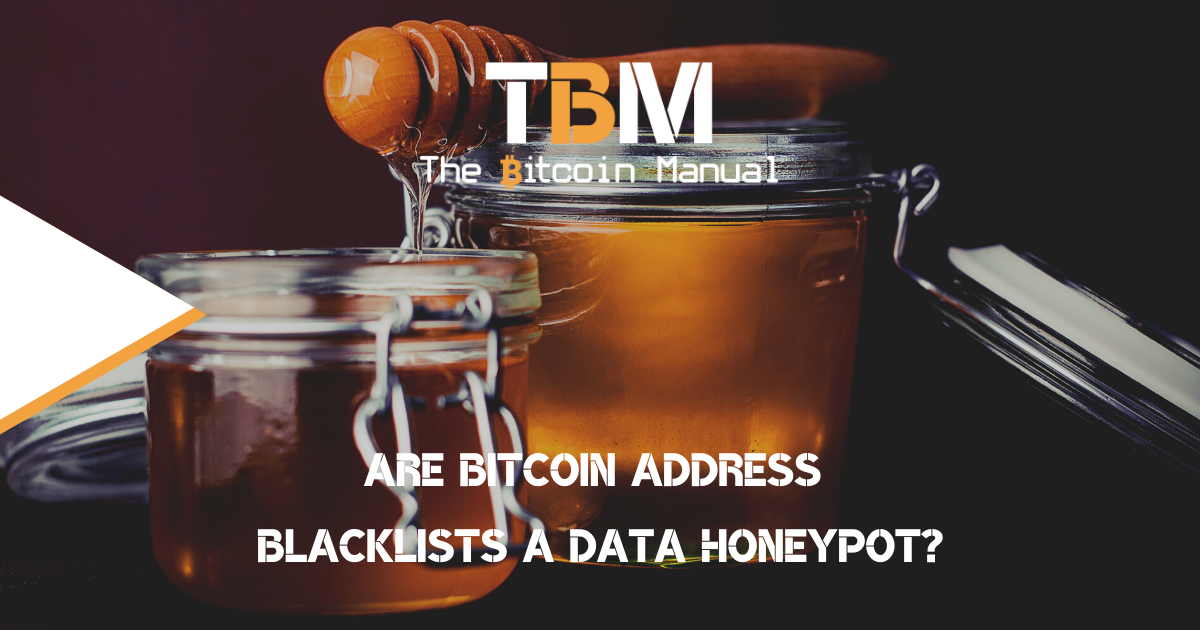 Bitcoin is uncensorable; no one can stop you from broadcasting a transaction to the network if you have a wallet with a private key that only you hold, and you do it via a node that you’re running and controlling. Having money that no one can take from you or tell you where to send it can be a real pain for governments who want to have the ability to oversee all transactions.

Yes, they’ll say the surveillance is done for your protection, to avoid criminals and terrorists from using the network, but really how big a portion of bitcoin is that? Most of us simply want a money that doesn’t love value; we’re not trying to fund a coup d’état.

But no, we’re all painted with a black brush and very broad strokes. Whatever happened to innocent until proven guilty? This take on money is more like guilty until we decide you’re innocent.

The truth is these governments want to know who has funds that are sitting outside their system of control, so they can keep a list of potential piggybanks. If you think your government is not looking to squeese every drop out of you and 6102 your bitcoin as their economies turn into peanut butter brittle, then you’re living in a dream world.

We’ve already seen the draconian measures resulting from covid and how quickly marshall law can come to any street in the world. So why do you think they’ll treat bitcoin and bitcoiners with anything else but hostility?

The first layer of so-called “protection” is KYC and AML compliance, where you need to provide identity documentation to purchase bitcoin. Have you ever wondered why they want all this information for you to buy something that they claim is going to zero?

Do I have to KYC to buy a lottery ticket? Do I have to KYC to buy oranges? No, so this shows that they realise that bitcoin isn’t going anywhere, and it does have the potential to upset the apple cart, and they want to know who these cart shaking dissidents are and where they live. If you’ve bought bitcoin on a regulated exchange, yes, you are on their shitlist.

If you’re a good boy or girl, they’ll still let you buy bitcoin and even custody it in a wallet you control, but this is only with their blessing. The moment Bitcoin is banned, or entities force KYC on you, and you refuse, you are either locked out or labelled a pariah.

So they’ve got you in the ecosystem; sure, you can use CoinJoins in the future CoinSwaps and Stealth Addresses, but that first touchpoint will always be kept on record.

Why your bitcoin could be blacklisted?

The next step in the stage of trying to force control through intimidation tactics is the blacklisting of addresses. When bitcoin may be stolen or used for criminal purposes, including terrorism financing and money laundering, it can be added to a blacklist, or rather the public addresses and associated UTXOs are added to a list. These blacklists can’t do anything to the chain; they cannot be enforced, but if you hit a centralised touchpoint like an exchange, those funds can be seized, or you can be arrested depending on the crimes attached to those funds.

Bitcoin may use services like P2P exchanges or mixer for obfuscation. But this does limit your ability to move in and out of the fiat system.

Centralised services that have to comply with regulation have to use these sanction lists and even go as far as to reject or seize mixed coins. You may not have a clue that the UTXO you got is tainted and could be accused of all sorts of crimes.

Bitcoin is pseudo-anonymous, so even with KYC, AML and Blacklists, there is a degree of assumption happening on the enforcement side.

Chain analysis teams, AI teams and Machine learning teams are working with governments to create a surveillance layer on bitcoin, pulling information from KYC and AML sources as well as international blacklists or sanctions lists.

What are global sanctions lists?

For example, in the United States, the Office of Foreign Asset Control (OFAC) issues such lists. In the United Kingdom, it’s Her Majesty’s Treasury, and the European Union adds “dirty” addresses to the EU Consolidated List.

What does it mean if the address is in one of the global blacklists?

Addresses that are on the global blacklists do not have the overall risk assessment and may even have reliable constituents, but they are included in such lists for some reasons.

If there is a Blacklist mark next to the address, it means that we do not recommend you to interact with it. As a reminder, our blacklists include addresses associated with violence, blackmail, extortion, fraud, etc.

We collect data from several global sanctions lists, including the US Treasury’s Office of Financial Assets Control (OFAC). This regulatory body is responsible for complying with sanctions rules that apply to trade and financial activities in the United States of America.

OFAC sanctions are among the most common regulatory mechanisms on the global cryptocurrency market. The user risks losing the opportunity to use their assets forever as soon as their address is blacklisted by the jurisdiction. All financial institutions that operate in the United States fall under the regulatory sanctions of the organisation. OFAC also provides several lists that combine suspicious entities by activities.

What is the use of checking the address in global blacklists?

Bitcoin blacklisting and verification are said to help you to avoid sanctions for using the assets that you could accidentally get from the scammers. Even if only some of the coins you own appear to be “dirty,” trading platforms with AML policies will block your assets and add the address to their Blacklist.

Now, this is all fine and dandy, but when a government can change rules on you, like turning the funding of a political cause or protest into a crime, this ability to blacklist addresses becomes less helpful and more of a sinister tool of oppression.

What happens to blacklisted bitcoin?

Once a coin is tainted by these blacklists, it is impossible to buy or sell assets previously used for criminal purposes on trading platforms with reliable AML policies since such funds are immediately blocked. However, there is a risk of purchasing such bitcoin on unregulated exchanges or receiving it as private payment.

That is how they force people to remain in KYC land and essentially force you to you enter into a financial transaction with a complaining party. Do you see what I am getting at here? They want to control as many data points in and out of the bitcoin network as possible, be that for tax reasons or other motivations.

These blacklisted addresses and UTXOs are monitored by a network of bots that spider the blockchain to ensure that these coins are not moving, keeping certain people from accessing funds or risking the long arm of the law overreaching.

Having a blacklist on bitcoin addresses is less than ideal, but can their database stand up to scrutiny is my question. We all know bitcoin can handle attacks and continues to be attacked in different forms, but soldiers on. Bitcoin is an immutable ledger gauded by thousands of nodes, all agreeing on who owns what and who can do what with the funds.

These blacklists are not protected by decentralisation or hash rate; they are centralised SQL databases that become a growing central point of attack. Think about it; I am not saying anyone should do it, but think rationally here.

South African bitcoin pleb falling down the rabbit hole and willing to share every bump, scratch and knock along the way
View more articles from this author
PrevPreviousHow To Delete Your BlockFi Account
NextWhat Are Bitcoin Submarine Swaps?Next