Home » Articles » How Would An Executive Order 6102 Affect Bitcoin 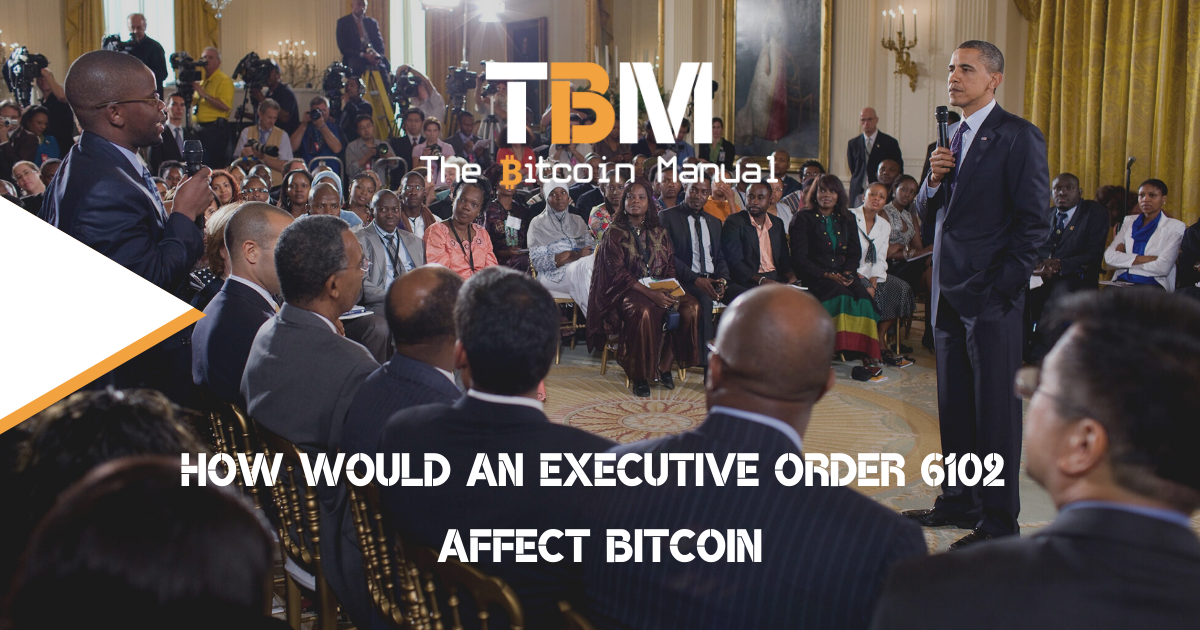 The growth of bitcoin has started to worry governments worldwide; we’ve seen many states becoming increasingly hostile, banning mining, putting restrictions on ownership or trading, and these actions don’t seem to be letting up anytime soon. While there are many steps governments can take to slow down the adoption of bitcoin before an outright ban and seizing of assets, it’s still an outcome that is very much on the table, especially with the current nature of the bitcoin market.

As more money leaves the fiat system to find refuge in bitcoin, governments will start to become desperate, and if your network wants to survive against theirs, you have to be ready to accept the full force of their might. To quote the loveable Nobel Prize-winning economist Paul Krugman, the fiat system is backed by men with guns.

So what if the guns do come out? What happens then? Now many of you reading this may be thinking we don’t live in an authoritarian state, or they’ll never resort to such measures. I am not saying you’re wrong; I am only saying this is a possible reality, and look at what you as a bitcoiner can do.

Most people hate to think about bad things happening, so they always underestimate their likelihood.

Except, of course, for bitcoiners! 😛

So let’s take a quick look at the history of Executive Order 6102 and apply it to bitcoin.

Less than 90 years ago, the Emergency Banking Relief Act of 1933 and Executive Order 6102 was authorised U.S. President Franklin Delano Roosevelt to force American citizens to relinquish their gold under penalty of the law.

Executive Order 6102 came to fruition to assist the U.S. government in exerting more control in devaluing the dollar more aggressively to stimulate the economy during the Great Depression. As long as citizens had the opportunity to preserve their wealth in gold, they had a way out of economic tyranny. The plans for an economic stimulus would result in evident, high inflation as people would flee to gold.

So the government had no choice but the remove that option from the table. The executive order did have a compensation plan, where owners would receive $20.67 for each troy ounce of gold. Soon after the Executive Order. 6102, President Roosevelt raised the price of gold from $20.67 to $35 per ounce, devaluing the dollar by 58% in one day.

Executive Order 6102 was not a unique event in history and may even be one of the more gracious, as there was still some form of compensation, even if it was a wealth stripping compensation.

Mass gold confiscations have occurred around the world for thousands of years. Gold was confiscated en masse in Communist China, the United Kingdom, and the Soviet Union.

Gold is susceptible to mass confiscations because it is physically challenging to hide, secure, or transport. These physical limitations incentivise gold owners to store their gold with centralised custodians, usually banks. These banks are susceptible to government coercion. Whereas it would be extraordinarily costly to confiscate gold from millions of private homes, looting the far more limited number of banks is relatively efficient.

As mentioned in the case of gold, confiscation was made easier by the centralisation of funds. A mistake many bitcoin holders make today. Most people who buy bitcoin do not see it as money; they see it as a speculative way to get more fiat. They don’t know the value of taking it off an exchange if they will sell it in the future.

Some don’t take custody of their funds because it seems too complex; they are naive or simply cannot be bothered to care. Regardless of your reason for leaving it on an exchange, in a 6102 world, you’re going to see your bitcoin taken from you.

Leaving it with a centralised system that can be pressured, regulated or banned themselves, these platforms will be forced into compliance relatively easily. So these bitcoin holders will be the first to get burned, as they are the low hanging fruit of the operation’s goals. Since you don’t own any bitcoin, but only a promise of an IOU with digits on a screen rendered from a central server the platform uses.

You have no power or claim over those funds.

If governments were to try something similar today with bitcoin, you can be sure it would put markets in a panic; the bitcoin price would drop as people sell off to try and drive value into other assets that are deemed legal. There would be bank runs as the speculative holders try to get out of bitcoin, and this pressure could expose exchanges if they do not have the funds on hand, causing further liquidity problems.

There will also be a minority of people who take the other side of the trade and try to purchase as much bitcoin as they can before it is outlawed. This could be on exchanges if trading into bitcoin is not suspended or via P2P markets and private deals. In this instance, it would be important to protect your identity as exchanges would be reporting purchases and balances to the government. Even so, once the coins have been removed from an exchange, it’s pretty hard to go and confiscate individuals bitcoin, but not impossible. It all depends on how aggressive a government wants to be with their rollout.

The more aggressive, the less of a footprint you want to leave surrounding your ownership of bitcoin. Finding a more private method like P2P exchanges or private deals would be the safer option.

Like any decree by the government, there will be a vocal yet small minority that opposes the decision. Their ability to be vocal will come down to the fact that they have custody of their bitcoin. Sure they can be taken down one by one, but I doubt these people would want to fund the state. These bitcoiners will sooner destroy their bitcoin keys before handing over their funds.

The pain this remnant class will have to endure or hoops they will need to jump through to keep their bitcoin and identity that ties themselves to funds a secret will all depend on how aggressively a government wants to violate individual property rights.

You can ban country and your citizens from bitcoin, but you can’t restrict bitcoin usage, and it will live on despite regulated institutions removing off-ramps. There is over 18 million bitcoin in circulation that can be broken down into trillions of satoshis. So there is more than enough to redistribute and support any commerce and exchange of funds.

People who want to own bitcoin will find a way to own it. Through home mining operations, they can hide effectively or engage with citizens who have bitcoin both locally and internationally.

Since bitcoin lives on the internet is entirely borderless, and the software is free and open-source, a grey market will always exist in your country despite the ban.

Taking chips off the table

Bitcoin is the one method you can use to take custody of your wealth, and no one can remove it from you. It’s the first time we have had such a tool, and perhaps that’s why it’s such a foreign concept to most of us. This is the true power of bitcoin, the action of self custody. Unless you hold your own keys, you are not leveraging bitcoin’s robust network, enjoying censorship resistance or having the luxury of its protection against confiscation.

If you’re leaving your money on exchanges because it’s easy or you get a return on your funds, you’re opting for short term greed, which can turn to long term pain.

In times of crisis, the rules change, and I am more concerned with the return of my money than the return on my money.

South African bitcoin pleb falling down the rabbit hole and willing to share every bump, scratch and knock along the way
View more articles from this author
PrevPreviousCan You Have NFTs On Bitcoin?
NextWhat Are Bitcoin AOPP Wallets?Next