Home » Articles » Can You Have NFTs On Bitcoin? 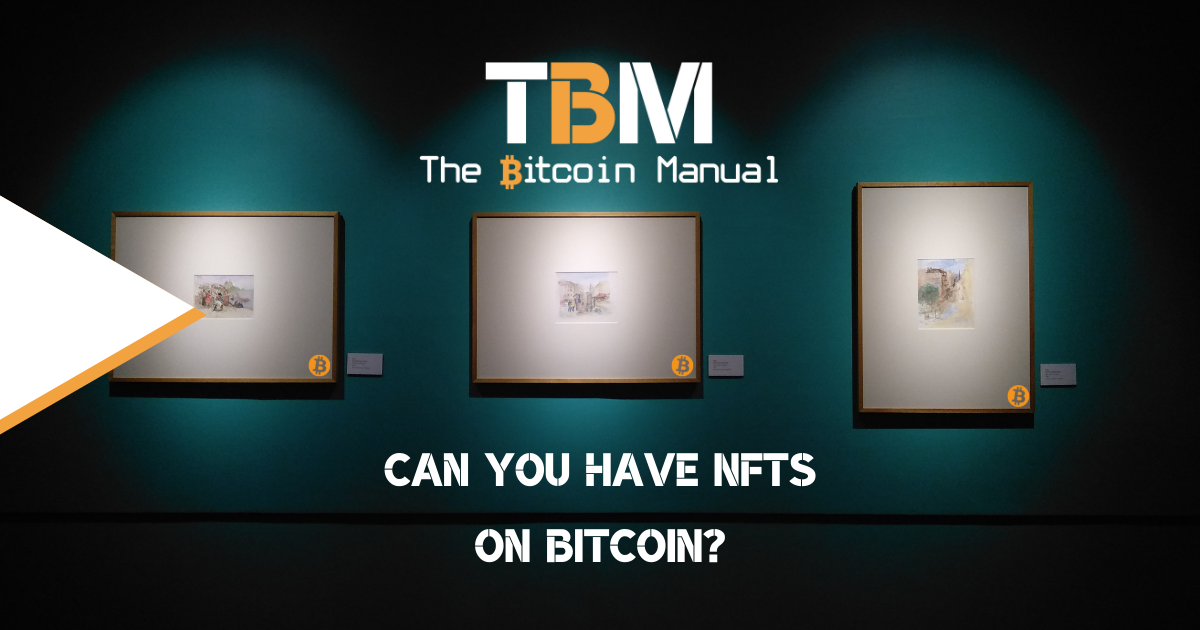 When I started dipping my toes in to Bitcoin and the rest of the shitcoin world at the end of 2017, the buzzword at the time was “ICO” or Initial Coin Offering (or Con offering if you prefer 😉 ).

This was where literally anyone could create some random token, offer it up to “early investors” for a cheaper price and then dump it all on the retail folks who would get rekt with the sales pitches and promises of riches from moonboys, i.e. scams, rug-pulls or Ponzi schemes.

Nowadays, it seems NFTs or “Non-Fungible Tokens” have taken center stage as the next biggest buzz word going but can you have them on Bitcoin or should it just be left alone? What even are they anyway?

What Are Non-Fungible Tokens?

NFTs are basically a limited number of unique tokens that relates to a specific thing or event which have an underlying smart contract built in to them. These contracts can represent pretty much anything.

They are “minted” or created by a user or company only once but the token can be sold on in perpetuity on the blockchain with full traceability, perhaps as a collectible.

For example, you can have an event master create a limited number of tickets for a show based on the capacity of the venue if in real life or a specific online/livestream event. Then those who attended can keep their ticket for as long as they want and sell it on as a collectible should the tickets become desirable in the future (e.g. attending my first concert lol).

The additional benefit here would be that NFTs make sure that ticket scammers aren’t able to magic them out of thin air as paying customers would have a unique code. If they can’t attend, they’d be resold and the event organisers would get a resale commission as part of the contract.

Other examples that you’ve probably seen more of are the pixelated jpegs that seem to be selling for eye watering sums of money. Or digital art that could be tied to a real life version that is only redeemable by verifying the NFT owner.

The question over artist or musician rights could potentially be addressed by allowing NFTs to function as a creative license, timestamping the creation of a piece of art on to the blockchain as a means to protect copyright.

So as you can see, there are some use cases for NFTs in this digital age we’re fully immersing ourselves in but can they exist on the oldest blockchain of them all?

There is work going on to build side chains on Bitcoin where NFTs can be bought and sold on a separate blockchain to Bitcoin but is interoperable with it.

These include sites like Raretoshi, Token Ocean, Mintalio and NFT Glee that are all built on the liquid network that have their own token (l-BTC) pegged 1-1 with native Bitcoin.

In addition to this, there are auction sites such as Scarce City where you can pay for artwork directly with lightning.

With the latest upgrades and soft forks happening on the mainchain to facilitate developments on second and third layers, although it is still very early days.

Bitcoin is primarily a peer-to-peer digital money with a fixed, maximum supply but when selling goods, services and products, you’d just need a way to create a marketplace on your website that supports lightning payments and away you go.

NFTs are different though and require a way to embed it on to the blockchain so there’s a timestamp and proof of ownership. As Bitcoin’s mainchain is mainly for final settlement of batches of transactions, I feel that NFTs could be better suited to the second layer for instant payment for events to give an experience customers would already be used to.

However, as I’m not a blockchain engineer or technical software developer, I don’t know the full capability of having NFTs fully operable with Bitcoin as of yet. If you are more technically savvy and know the ins and outs of the underlying tech, then we’d love to hear from you in the comments!

From what I can tell with my limited understanding, NFTs are already being built on sidechains of Bitcoin. I feel as time goes on, there will be more companies that start to realise this and perhaps minting an NFT via sats directly wouldn’t be out of the question.

A combination of lightning wallets and a marketplace to sell them on would be all that’s needed to create the timestamp trail needed.

As someone who produces music, I’ll be keeping an eye on developments on the Bitcoin NFT space and will share what happens as I come across them!

British bitcoin pleb falling down the rabbit hole and willing to share every bump, scratch and knock along the way
View more articles from this author
PrevPreviousHow To Set Up A Bitcoin Wallet With Trust Wallet
NextHow Would An Executive Order 6102 Affect BitcoinNext