What Are Bitcoin AOPP Wallets? 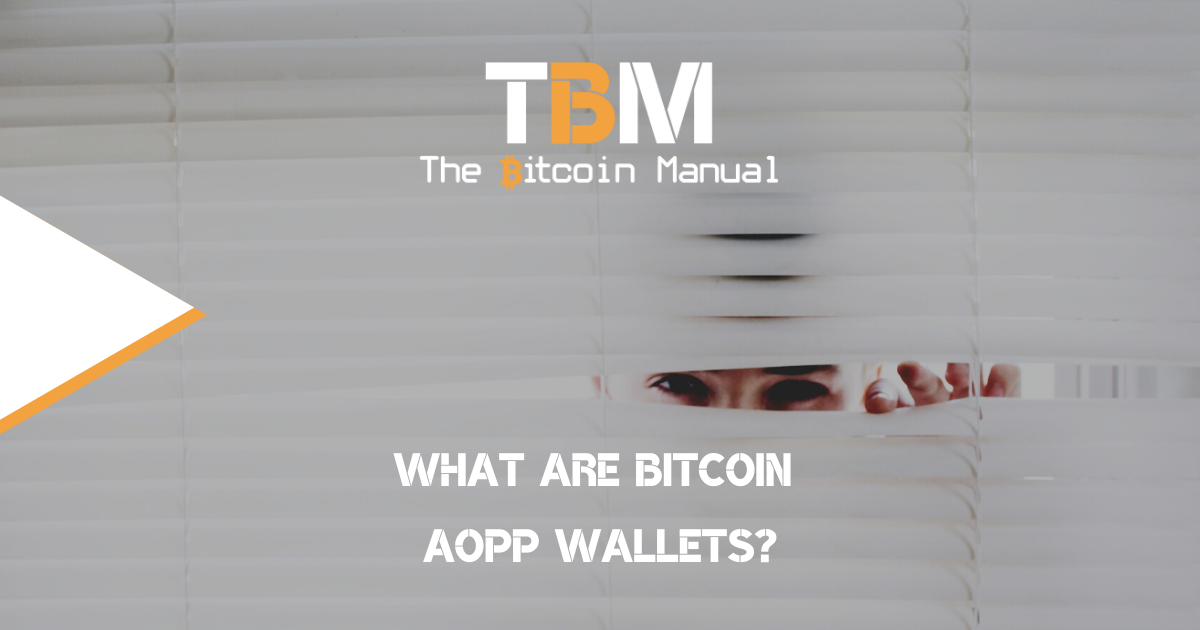 Financial privacy under the fiat system is long gone; banks and fintech apps are tracking all your economic data from purchase behaviour, salaries, loans, repayment frequencies, and so much more. If you consider the big stink people make about social media apps collecting data on what kind of puppy photos you like and how they use it to manipulate you to generate a profit. Can you imagine how much more valuable your financial footprint information must be to different companies?

In addition, governments would love to know how much money you’re holding and making so they can ensure they snap up their share of the fruits of your labour. Compliance with their rules, in this case, is the path of least resistance, and if you try to resist, your funds can be seized since you never really owned it unless you had a physical representation of that value. However, as physical representations of wealth become more impractical in today’s digital world, it encourages more people to remain in the financial spyware walled garden.

Before bitcoin, there wasn’t much the average citizen could do about these infringements on our privacy and our ability to own property. Bitcoin is the first digital asset you can take custody of to protect against the automatic seizure of monetary debasement. Sure, if government officials want to go door to door with a gun to their head, many would hand over those keys, as death or prison would be quite the motivator.

But automated seizure or seizure by simple decree isn’t possible with bitcoin; officials would have to forcibly take it from you. To protect against situations like these, bitcoin users would need to protect their privacy and break the links between their identity and their bitcoin. Acquiring non-KYC sats, using coinjoins, or mining are all ways to add some doubt into the ownership of bitcoin.

Acts that very few bitcoiners do, nor do many bitcoin holders take custody of their keys.

The not your keys movement

In bitcoin circles, there is a push to take custody of your funds, either by using software wallet or hardware wallets. Taking control over your money makes it harder for hackers to access it when compared to third parties like exchanges and protect against confiscation or loss of funds due to exchange mismanagement.

Unless you have bitcoin in a wallet where you hold the private keys, you don’t own bitcoin; you own a promise to pay you bitcoin in the future. Now once you create a wallet and send funds from an exchange, it’s pretty much anyone guesses who own those funds. You could be sending it to yourself, or you could be paying someone else; there’s an element of deniability at play here.

Once your funds are in the bitcoin ecosystem, you can swap it with another person; you can peg it into second-layer solutions like lightning or liquid and start to break the trail of funds from the exchange. A fact that regulators and governments don’t like as the price of bitcoin increases, having more anonymous wealth living outside their system and purview seems like a growing threat, and these institutions are looking to correct it by trying to remove your right to financial privacy.

In Switzerland and the Netherlands, companies that fall into the new sector of the Virtual Asset Service Provider (VASP) sector will have new rules to adhere to by regulators. These VASPs are any company with a product that can be considered a financial intermediary dealing with Bitcoin. The companies affected would primarily be exchanges, both hot wallets and cold wallets providers.

Now, this system will be an API that wallets and exchanges need to connect. Users will be able to expose their on-chain custodial wallets and tie them to their identity, doxing you and limiting your privacy.

What is the reason for AOPP?

The reason for AOPP is to try and track the holders, and the amount of on-chain funds they have, either for tax purposes, as people who are fully doxxed cannot deny they own those funds. As well as a way to spy and even censor bitcoin transactions since they know who you are, you’ll be far more careful on how you move or spend that bitcoin.

Since they know how you are and who controls the funds, they can now track any taxable events you may create using that wallet.

Since they know how you are, they could blacklist those addresses and limit your ability to exchange those funds with local exchanges.

What can bitcoiners do about AOPP?

As a bitcoiner who prefers to keep their finances private and not contribute to a massive honeypot, if exposed would expose your funds to the world, you can avoid using exchanges that support these systems. You should opt for P2P exchanges, mine bitcoin or try to buy bitcoin for cash directly from people who you know that are more comfortable with P2P exchanges or who mine bitcoin.

If you have no local options, you can also ask friends and family in other countries to purchase bitcoin on your behalf and send it to you in exchange.

Finally, if you must purchase bitcoin from a AOPP complaint exchange and use a AOPP complaint wallet to take custody of the funds, you may want to coinjoin those funds and send it to another wallet instead. Sure the history on the AOPP wallet will remain and you could be liable for the transfer as a taxable event, but at least you can maintain some semblance of deniability of those funds.

South African bitcoin pleb falling down the rabbit hole and willing to share every bump, scratch and knock along the way
View more articles from this author
PrevPreviousHow Would An Executive Order 6102 Affect Bitcoin
NextBitcoin Gaming: Turbo ’84Next