Will Value For Value Monetisation Really Catch on?

Home » Articles » Will Value For Value Monetisation Really Catch on? 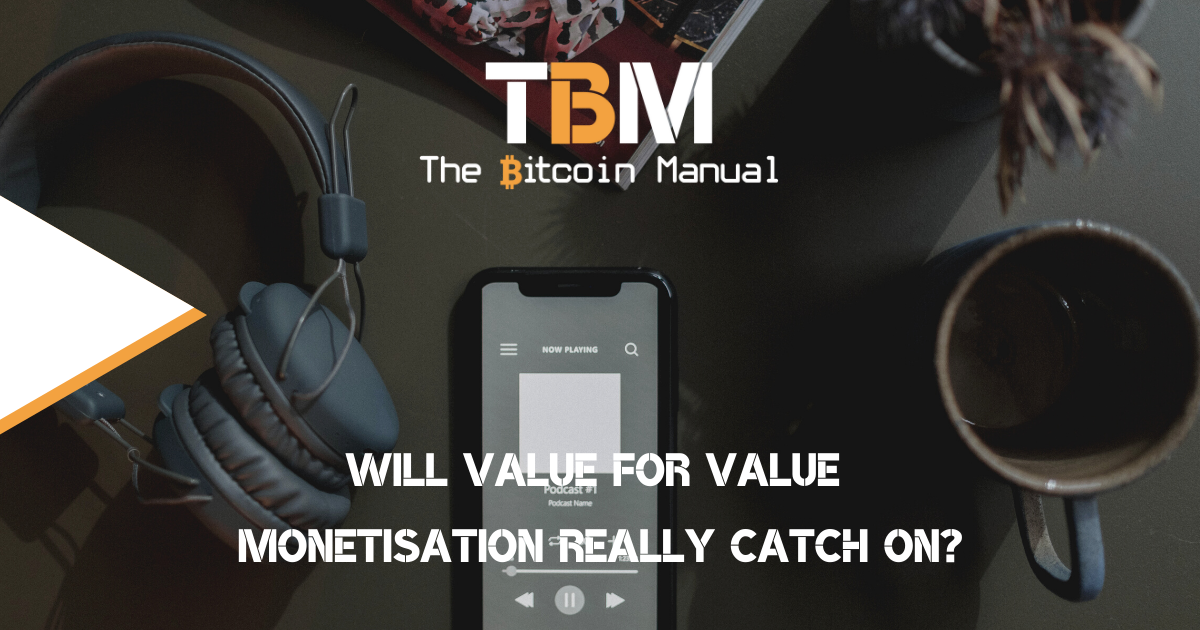 The information economy continues to grow each year as new content creators in the form of bloggers, YouTubers, podcasters, newsletter curators and more turn to the internet for a source of income. The internet remains a free source of information. All these creators are doing is spending their time sifting through the noise online and creating a curated feed, along with some personal opinions.

The creator economy is also attractive to people who have been marginalised by larger entities. These creators’ voices would not be promoted by large media sites or social media algorithms. So they create their content focusing on certain sectors of the internet and rely on the patronage of those who enjoy their content. It became a place to voice alternative points of view and foster discussion and still does today in certain parts of the internet.

However, the largest part of the creator economy has long since been captured, and even using the term content creator leaves a bad taste in my mouth when I think of all the commodified garbage put out there. As creators chase ad dollars, they are encouraged to make more podcasts, videos, newsletters and do anything and everything to build engagement.

The advertising model creates certain perverse incentives and, in turn, hollows out the product until it’s nothing but a shell of lowe time preference content that can easily be ground out for views and tips.

People have become lazy while others have grown to distrust legacy media for their news rightly. In response, we’ve seen a growth in individual journalists, home detectives and hobbyists all forming a new independent media class.

Since independent media is not always bankrolled by ad dollars because they often call out those advertisers, patronage and subscription services have been a primary method for these individuals to keep going. Its become commonplace to tip creators, use promoted comments (super chats), subscribe to their paid video or newsletter, all as a way to fund their work.

In most cases, when you do donate or pay a creator, you’re sending most of it directly to that person to use, minus processing fees with the provider they’re using. So you have a little more faith that your money is going towards keeping the content coming along, which means something to both parties, the creator and the viewer, and helps build a bond between you and your audience. One you won’t easily break to sell them out, not that many don’t, but that’s a story for another post.

What is value for value (V4V) monetisation?

If we pull on the string of where the creator economy is heading in the future, I think we can all see a viable path towards bitcoin. Programmable money that is censorship resistant, globally available, trading 24/7 and can settle instantly is a no brainer.

Bitcoin would only have to be natively added into applications these creators are familiar with, like Podcasting apps, live-streaming apps, newsletter creation and content paywall apps, and they would be off to the races.

This is where the “value 4 value” model has come in, starting with podcasts. There are several emerging podcast apps or podcasting 2.0 apps out there that can be configured, by a listener, to send you Bitcoin as they listen. It’s free to set yourself up to receive them, too – and by doing it, you’ll reward podcast app developers and the open podcast ecosystem.

There are three main methods of monetising under value 4 value for now, namely:

Why shitcoins can’t adopt a value for value model

Let me get this out of the way before we critique the value for value model. When you’re rewarding someone for the content they create, in some cases, you set the price as in the tips you send or the value you stream; in other cases, it’s the creator by the subscription fees they charge.

In both cases, it’s about the buyer and seller meeting one another and deciding on a fee that is worthwhile, and once settled, and the creator takes ownership of those funds, they have the confidence of liquidity backing bitcoin, should they need to acquire fiat or purchase goods and services with bitcoin.

When you use a shitcoin, as let’s say, instead of bitcoin, we use “Podcast Coin”, you are now at the mercy of those willing to provide liquidity for you to realise value. First of all, no store is accepting podcast coins for goods and services, so you only have one way out to try and sell it for bitcoin or fiat; if there is no liquidity/demand to purchase the token, you were paid for your value with a useless token.

The V4V system, under a shitcoin model, would be “value for no value” or “value for value subject to convincing new bag holders. “

Positives in the value for value model

As more eyeballs come online and their screen time increases, it brings with it more ad dollars to tap into that viewership. Ad dollars might be great for the production value at first, but eventually, it compromises, and the product suffers.

In the V4V model, you are not tied to one big payout, but your payout is tied to the opinions of many individuals. So you’re not easily swayed; you can focus on creating content that appeals to people instead of what your ad overlords want and can call out bullshit without impacting your pocket in a significant way.

We’ve seen many content creators sell out or try to get into things that are not their skill set, like creating useless merch to try and drive revenue.

In the V4V model, if well supported, doesn’t turn creators into these scatter brain online grifters and allowers them to focus on what they do best, be that research or telling a compelling story.

Negatives in the value for value model

Sadly patronage for content is not a popular product that can sustain a lot of creators; it may work in specific niches or the LSM you attract as your subscriber base.

You are also at the mercy of what people think your content is worth; you can only convince a handful of people some of the time to make it worth your time versus doing something else with that time. If you don’t have a big enough audience or a wealthy enough niche of listeners, you’re probably not seeing much fruit from this tree.

Additionally, since you’re using bitcoin/sats, you alienate people who have very little understanding or interest in bitcoin. If stablecoins were an option that could be atomically swapped via Liquid or Lightning, it sure could help the adoption and use since most people still think in fiat terms.

Someone else will pay the thought the majority of your audience will use to validate not paying you a cent. If more people think it and nobody does anything, you’re left stuck entertaining and educating people who all think someone else will pay for the benefits they’re getting and in turn, no one pays.

I do see the “value for value” model as limited in its impact today; consumers, by in large, are used to enjoying content for free and would much rather sell their eyeballs to sponsors. The issue is the creators like podcasters, and the like is direct sponsorship deals. This is where deals are done 1-1, so they are easily corrupted by certain sponsors, and instead of openly being ads, the promotion and bais seep into the content.

To help reduce the impact of direct deals, I think that platform revenue share could be an option. If the platform, for example, had an open auction where advertisers can pick categories they want to bid on and then the amount of listening minutes is matched with the amount of capital bidding for those listens.

So creators and even contributors like commentators who keep people engaged get capital, and who knows, creators could even split some of that value with their listeners in the form of giveaways or encouragement for loyalty.

I am not saying the donation model should go away or the streaming length payment, but I think it’s part of the ecosystem. Instead of relying on one method of income, having many encourages creators to focus on improving the product for all contributors.

It also encourages creators to keep going and try to keep listening, reading or engaging as long as possible, instead of creating content for content’s sake, to have ad reads inserted or worse to start shitcoining.

In addition, specific UI changes and features that give creators more control may help, such as:

Will value for value catch on?

In its current format, no, I think it remains relegated to a fringe of people who are bitcoiners or those who have been marginalised or censored from fiat platforms and are looking for the last alternative to keep going. As a bitcoiner, I would love for more buying demand for bitcoin to reward creators in any space, but this is not the reality we live in, and people are still coming to terms with the idea of the need for uncensorable money.

Until bitcoin acts like money without people even realising it, such as building it into the UI of apps or abstracting it a method where people interact with systems that look like fiat on-ramps but use bitcoin in the background, I don’t think you’ll get many sold on the idea.

In the meantime, I do hope more creators adopt bitcoin as part of their monetisation, if not for the money, then to create awareness for bitcoin and the possibility of using it should other options get shut down in the future.

South African bitcoin pleb falling down the rabbit hole and willing to share every bump, scratch and knock along the way
View more articles from this author
PrevPreviousHow Lightning Network Stable Coins Work With Omnibolt
NextWhat Is A Dual Funded Lightning Channel?Next