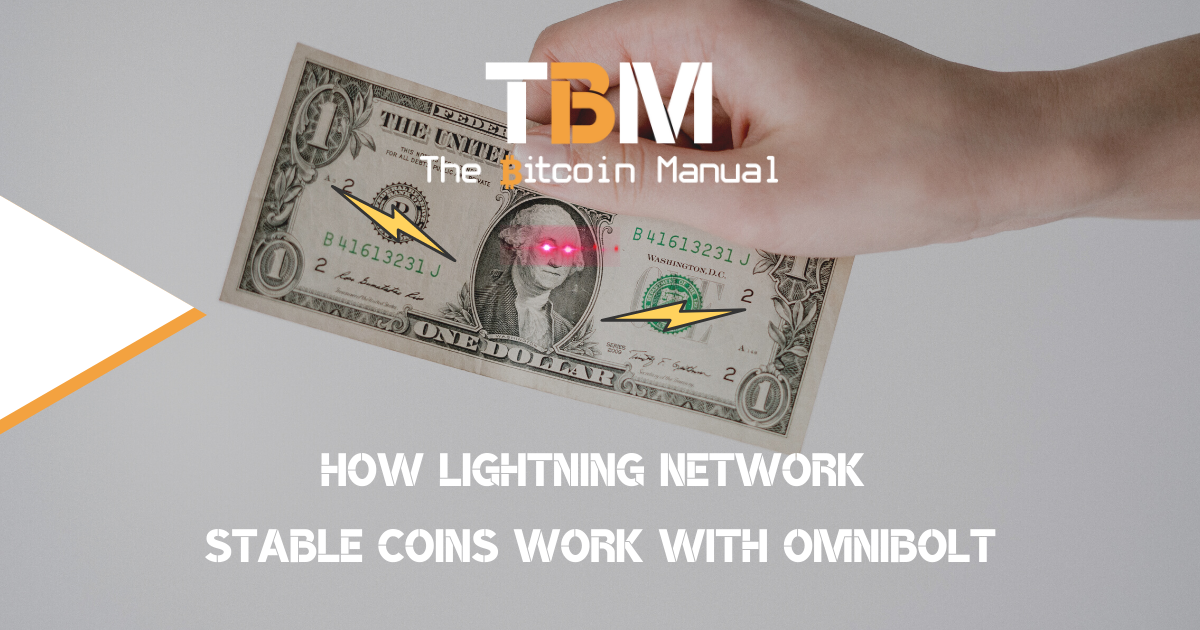 The race of stablecoins on the Lightning network seems to be heating up, with several proposals on how it can be implemented. Some are focused on using derivative contracts; others are looking at using DLCs; another would be to are looking to bridge liquid assets onto the C-Lightning implementation of the Lightning Network.

Now in a first, as revealed on Twitter, the team at  Synonym, a Bitcoin-powered service provider, demonstrated the first Tether (USDT) transaction in a Lightning channel. This was the first time a mainnet stablecoin was bridged to Lightning. The transaction was performed using Omni, a platform for creating custom digital assets on the Bitcoin blockchain.

Typically, users transfer bitcoin to the Lightning network through a timelocked transaction on Bitcoin’s mainnet. This initial transaction commits bitcoin to a Lightning channel between two nodes, and the channel is only established after the counterparty has confirmed the funding transaction.

The timelocked contract will eventually distribute the funds after Lightning transactions are netted, and the channel is closed.

How OMNI piggybacks off Lightning

The Omni protocol embeds custom assets like USDT in the Bitcoin blockchain through the use of the OP_RETURN opcode, which can be used to carry arbitrary data in a transaction. Omni runs off-chain and interprets these data on a separate platform.

When committing USDT to the Lightning Network, participants must use Omnilayer addresses created by the Omnicore software.

The counterparties follow the usual sequence of creating a funding transaction to open a channel, but a second transaction is also needed to commit USDT to the channel through a similar timelock mechanism. Payment routing and other activity then take place on the Lightning network amongst Omnilayer-enabled nodes.

What is Omni bolt?

OmniBOLT is an offshoot of the OmniLayer network a protocol used to have assets built on top of bitcoin and the original network used to mint Tether (USDT).

OmniBOLT is based on the fundamental theory of Lightning Network specification and describes how to enable OmniLayer assets to be circulated via lightning channels and how can smart assets benefit from this novel quick payment theory.

According to the layer-2 protocol BOLT (Basis of Lightning Technology) specification for off-chain bitcoin transfer, we need a protocol to support a wider range of assets for upper-layer applications: payment, game, finance or scenarios that need stable coins.

Meanwhile, Omnilayer is an on-chain smart assets issuance technology that is proven secure and stable. Constructing lighting channels on top of it automatically acquires the ability to issue assets, temper resistance, and on-chain settlement. This is where OmniBOLT is built upon.

Having this implementation is a great stride for the Lightning Network and provides another layer of optionality for users. Suppose we do see this method adopted by wallets; we would have to see if exchanges if users want to exchange these assets for something else. So adoption and education would be key. If there is not easy to use UI and UX and an education drive, no one will know it exists or how to use USDT on Lightning.

The lightning network, with the help of OMNIBOLT, now has Tether (USDT); according to OMNI explorer, there is 1.3 Billion dollars worth of USDT minted on the network. That’s a sizable amount of value that can be put onto lightning rails.

The issue, like other USDT implementations, is that they cannot swap across chains without a centralised chokepoint. In most cases, people will use exchanges to move their USDT from one chain to another. Alternatively, they can use certain bridges available with certain smart contract platforms that provide wrapped asset swaps.

If bridges and exchanges aren’t available to allow USDT from different chains to move into Lightning, it could stall progress for this implementation.

Why use USDT on Lightning?

The benefits of using USDT are the same when using sats on Lightning as Lightning is asset agnostic. So when you send and receive packets of data via this network you can do so with lower transaction costs, increased privacy, and speed. Stablecoins on the Lightning network have the potential to empower circular economies if they can overcome the issues I mentioned earlier.

USDT on OMNI and the base chain may have not taken off, but perhaps Lightning can give it a second lease of life. Since Lightning is the primary means of payment if you can provide users with both a stablecoin and bitcoin, will they have any excuse not to leverage the network?

South African bitcoin pleb falling down the rabbit hole and willing to share every bump, scratch and knock along the way
View more articles from this author
PrevPreviousHow To Pay A Split Bill Using The Lightning Network
NextWill Value For Value Monetisation Really Catch on?Next